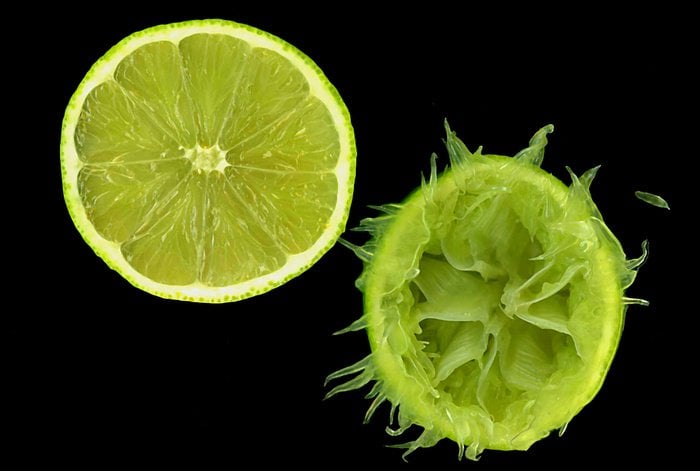 PHUKET: No discussion of the kingdom’s leading fruits would be complete without looking at the citrus family, which plays such an important role in Thai cooking.

I recall that in England more years ago than I care to remember, bright-yellow, oval lemons were treasured objects. Cut open and squeezed over sugar, they were used for Shrove Tuesday pancakes, or added to hot water for sore throats and streaming colds. Nowadays, you are more likely to find a slice in your gin and tonic.

The smaller lime (confusingly called a lemon in Thailand) was not in the picture at all. Yet here it is as ubiquitous as rice, and as commonplace as chilies.

These limes are much smaller and rounder than the conventional lemon, though they do come in different forms. The largest (manao in Thai) is Citrus aurantifolia and has a thin green skin which occasionally turns yellowish when ripe. It can be made into a refreshing drink to which Thais add sugar and – yes – salt, but it is usually served cut into segments, its juice a tangy addition to fried rice or meat and fish dishes.

The kaffir lime (C. Hystrix or makruk), on the other hand, has a rough, knobbly rind which is extremely thick and encloses bitter and relatively dry flesh. But it possesses an intensely fragrant skin which, when grated, is added to many dishes. Moreover, the distinctive, double-lobed and flavorsome leaf is likely to appear in many sour soups and curries even though it is too tough to eat.

Another increasingly popular lime is C. Mitis. Known here as kalamansi, the flesh of this larger species is especially juicy and slightly less acerbic than that of the traditional variety.

Grown widely in Thailand, all these limes are borne on large shrubs or small trees that are able to grow to about 10 meters, but are usually shorter. The shoots are spiny and the tough evergreen leaves are arranged alternately. The color only develops in cool conditions. Thus, most limes in fresh markets are green, even though they are already ripe.

Often cultivated in containers in temperate climates for their ornamental value, the small trees bear fragrant star-shaped flowers in addition to glossy fruits. Their commercial value is enhanced by the fact that they crop longer than any other fruiting tree. And because they hybridize easily, there is now a host of commercial varieties.

But citrus plants are not always easy to cultivate, even in the tropics. They need plenty of water in the growing season and applications of nitrogen-rich fertilizer to encourage healthy growth.

Because they are slow growing, little or no pruning is necessary. They do, however, need shelter from wind, especially in an island environment such as Phuket’s, and are quite disease-prone. Indeed, in Southern California, an aphid-like insect which carries a viral infection has created havoc in some citrus groves. The leaves are also attacked by leaf miners and by the larvae of some butterflies. And they are relatively fussy about soil conditions, needing earth that is fairly neutral with a PH of between six and eight. Chlorosis (a yellowing of the leaves) will occur if the soil is too alkaline. If you produce healthy, fruit-producing plants here, I take my hat off to you.

As for their nutritional and medical value, limes are highly regarded, mainly for their high levels of Vitamin C. It is a tale often repeated in history books that citrus fruits were given to English sailors on long voyages to control a vitamin-deficiency disease called scurvy, hence the moniker “limey” for Brits. In parts of the USA and Australia, the nickname has stuck. More mundanely, bottles of thick, concentrated juice were handed out to English families in World War II.

However, there are other benefits. The citrus family contains a whole range of trace elements: potassium, folate, calcium, vitamin B6, thiamin, niacin and many more. There is no harmful fat or sodium and, being a plant food, no cholesterol. Some evidence supports the view that taking lime juice reduces the likelihood of stomach cancer and may lower the risk of developing kidney stones.

So just keep on taking that daily glass of citrus juice…

However, if you’re more of a banana kind of person, check out Patrick Campbell’s next gardening column out on newstands this Friday.

Boating: New E-Visa on arrival for superyachts to Andamans