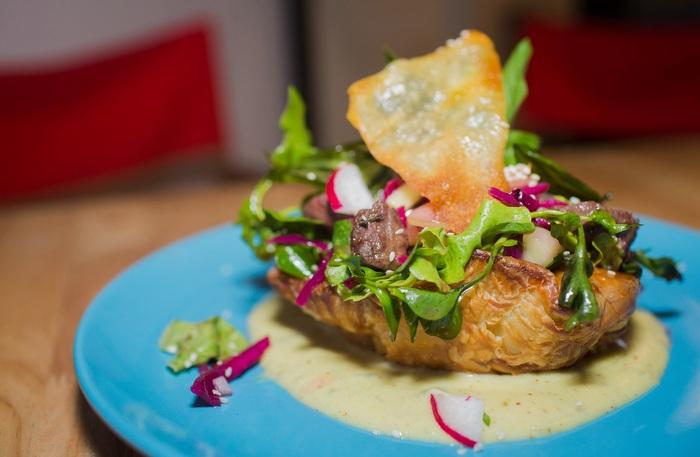 PHUKET: December ushered in a new air of excitement to the island. The start of the holiday season brought the streets to an even busier bustle, as did the large number of arrivals at Phuket International Airport.

Along with those arrivals was the appearance of new shops and restaurants open and ready to please the hungriest of patrons for the high season.

It is invigorating to see something different and fresh on the streets of Phuket Town, the ever-growing cultural heart of the island and newly appointed UNESCO City of Gastronomy.

Adding to this prestigious appointment bestowed on the island for its long, unique culinary history is the newly opened Surf & Turf restaurant on Phang Nga Road, near the Promthep Clock Tower.

With 11 years of experience, Tom has graced the kitchens of a number of famous French restaurants, including Haus Meer; Sasha’s Rotisserie and Bar; and even Ratatouille.

“Tom and I wanted to create dishes that still had the perfection and elegance of fine dining, but with a fusion style where people feel more comfortable and familiar with what they are eating, making them excited to try new things,” says Pang.

So what is the food like at Surf & Turf?

If you’re not sure where to start on the menu, dig into the grilled beef cubes with tartar sauce and salad in a puff pastry – it’s to die for. The fresh vegetables from the local market meld perfectly with the tartness of citrus and creaminess of the tartar sauce, which tastes as if it’s been infused with fruit. However, it hasn’t been. The magic is merely all of the flavors coming together to create a unique taste-bud experience.

On the surf side, one must-try is the seabass with prawn sauce, spinach and passion fruit, which is incredible, and just as beautiful and well blended as the grilled beef.

The key to the menu’s success? Love.

“Love is the most important ingredient when I cook. One of the best feelings that you can have is when you do something that you love and people love it too,” Tom says.

The concept behind Surf & Turf is not only to blend classic western dishes with the results of other culinary styles from the region, but to bring together the world of food and art.

Well known for her Edward Gorey-esque murals – which can be seen adorning the walls of Surf & Turf, as well as many frequented Phuket Town hang outs, such as Ghetto Child’s and Smokin’ Fish – Pang plans on opening an art exhibition space in the restaurant to bring together people who love good art and good food.

“We chose Phuket Town because it is a mixture of old and new culture, architecture, art and a mix of interesting people,” Pang says.

As for new culinary adventures for this amazing duo, be on the look out for their specials, which in the past have included mushroom risotto with parmigiano foam, beef ragout, chicken filled with mushroom sauce and tomato concasse, and new dishes that will feature their homemade German sausage, which won the hearts of patrons at the Boat Lagoon’s Lighthouse Market last year.

The food, like its creators, is innovative and unforgettable – a perfect addition to Phuket Town’s revered gastronomical diversity.