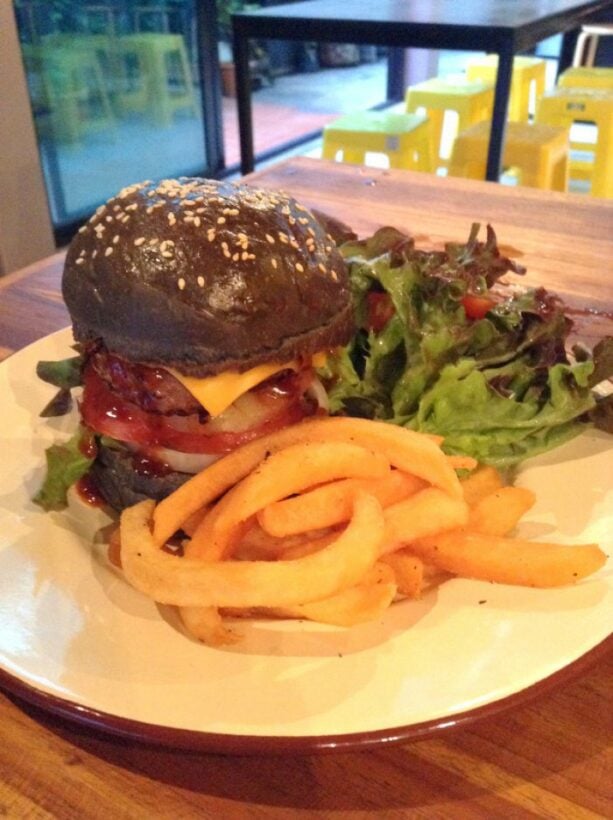 PHUKET: The black burger is all the rage in Bangkok lately, but unless one is actively paying attention to food trends from around the nation, one might not have had any idea that such a trend even existed.

What makes this particular burger special, and gives it its color identifier, is its black bun, which has edible charcoal powder mixed into the dough.

In addition to the color, the charcoal also offers a unique flavor, as if the burger itself was cooked on a charcoal grill.

One Phuket restaurant is bringing the black burger to the south and channeling the dark side with its homemade ‘Darth Vader’ burger.

Their Darth Vader burger is no ordinary black burger. Ooy has adapted the bun recipe, and the buns are made at home by Jeab. And the name? Well, I think it’s safe to say that Ooy is a Star Wars fan.
The burger itself can be made with beef or pork, but it is what goes on top that makes it really special.

Of course you have your traditional tomato, onion, cheese and lettuce, but to add a little sweetness, Ooy puts in pineapple and his homemade, tangy barbecue sauce, which gives it an extra kick.

“Because bacon is so expensive in Thailand, I decided to add more ham and incorporate some sweet flavors into the mix,” Ooy said.

This sandwich is massive and includes bacon, ham, egg, cheddar cheese and that wonderful combo of pineapple and barbecue sauce, on a homemade bun. It should also be noted that this and the Darth Vader come with a side of excellently seasoned fries.

The open concept of the restaurant was inspired by popular street kitchens throughout Thailand. Ooy, who is a former interior designer, likes to call it a ‘show kitchen’ and it’s easy to see why. The western-style kitchen gives off an air of a television set for a Food Network show, which is always playing on the flat screen near the counter.

Each dish at the restaurant has a story behind it and a unique twist that makes it special, whether it is the chicken parmesan served on linguine with the flavorful addition of Picorino Romano, or the signature Ooy salad made with lettuce, parmesan, homemade dressing and a generous portion of sausage and diced ham.

Ooy Street Kitchen keeps things fresh with their monthly specials, which in the past have included tacos, nachos and pork chops with mushroom sauce.

At a mere 10 months old, Ooy Street Kitchen is a unique and delicious addition to the Phuket Town food scene.

Open from 5pm to 10pm, Tuesday through Sunday, this kitchen is definitely one to write home about.