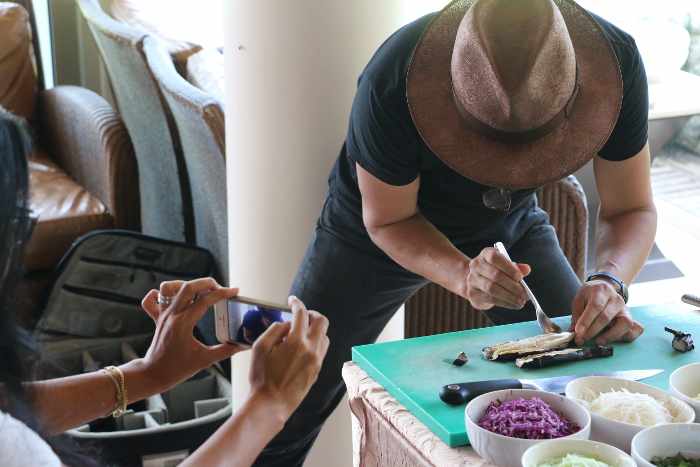 PHUKET: Being stuck in the kitchen might not be your dream way of spending the morning. But if the kitchen is in the lounge of one of Phuket’s premiere resorts, and it’s a celebrity chef that does most of the cooking, things start to look quite different.

This morning, it was Trisara resort that opened its doors for a number of foodies to attend a cooking class conducted by no other than Bobby Chinn, acclaimed chef, television presenter, restaurateur and cookbook author.

Soon after the guests gathered to watch Chef Chinn preform his magic, the airy Trisara lounge, overlooking one Phuket’s most seclusive beaches, was filled with the alluring aromas of caramelizing palm sugar, finely chopped lemon grass and roasting aubergines.

While preparing his Duck Pho Cuon and grilled eggplants covered with a layer of crispy shallots, Chef Chinn shared his secrets for the perfect Peking Duck recipe (it has to be smoked!), taking breaks only to deliver one joke after another, the way any acclaimed television chef should. It is no doubt this mixture of charisma and cockiness that keeps an audience glued to their television screens whenever a good cooking show is on.

However, the results of Chef Chinn’s efforts that did land on his guests’ plates proved that there is more to his fame than just charisma, and that Chef Anthony Bourdain might have been right when he proclaimed that: “What Bobby doesn’t know about Southeast Asian food isn’t worth knowing.”

Chef’s Chinn’s visit to Trisara ends tonight with an exclusive wine dinner during which some of his signature dishes will be served for a limited number of lucky guests.