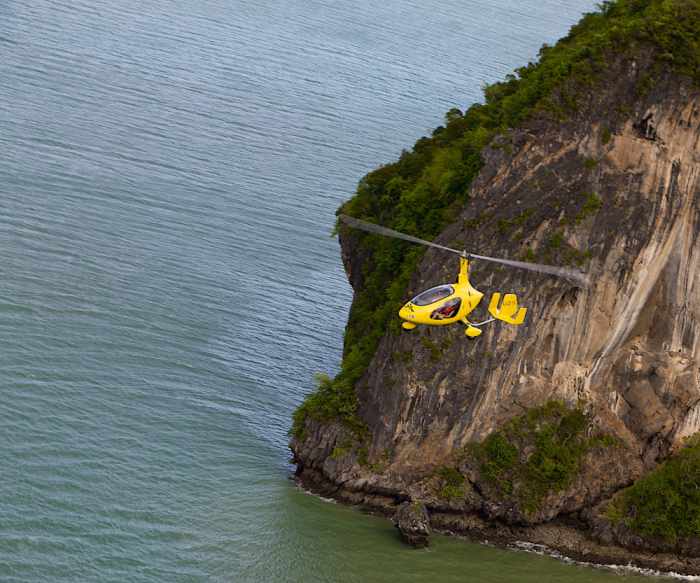 PHUKET: Flight training on the island’s one and only “gyrocopter” is going off without a hitch at Phuket AirPark in Pa Khlok. Phuket AirPark Flight Operations manager Pat James is among four trainees being instructed to operate the AutoGyro Cavalon by a factory-trained instructor from Sweden who is staying at Phuket AirPark for one month.

“It’s looking really good. Everything is working out the way it was supposed to. It’s turned out to be a better bird than most of us expected – much better,” said Mr James.

The other trainees are Phuket Airpark owner Robert Suchard Raksangob, as well as two of the Cavalon’s co-owners: Torben Jensen from Denmark and local building contractor Best Wanamakok.

Pat and Robert are being trained as instructors so that they can teach others to fly the AutoGyro, while Torben and Best are using the training as part of their efforts to become registered ultralight pilots.

As of May 23, the foursome combined had put in over 80 hours of training in the bright yellow two-seater, which has had many island residents staring aloft and pointing as if Superman had been spotted.

“We’ve done about 82 hours of training so far over the last two weeks, and we still have a week and a half to go to finish the training.”

Pat, a combat helicopter pilot during the Vietnam War, described the aircraft’s unique abilities when it comes to take off and landing.

“It takes off a bit like an airplane; it needs about 100 to 200 meters of runway to get up in the air, but the landing is very much like that of a helicopter. You autogyrate down and it’s very gentle. You only need about 25 or 50 meters for a nice smooth landing,” he said.

Asked about flight range and fuel requirements, he said, “It has the Rotax engine, like most ultralight aircraft. This particular one is turbocharged, developing 115 horsepower. We use standard motor vehicle gas, 95 octane, and we burn about 18 liters an hour. This gives us about three and a half hours of flight duration. We usually cruise at a speed of anywhere from 60 to 70 knots.”

“We’ve been flying it around Phuket and have taken it out to Phi Phi Island and up to James Bond island in Phang Nga Bay, but most of our flight training activity has been around the airfield itself here in Pa Khlok and down on the southern end of the island.”

“We are having so much fun with it. I feel like a kid at Christmas time. This is one very exciting little bird to play with. A lot of the flight characteristics bring me back to my helicopter days. It is so agile – easy and forgiving. The visibility is beautiful and it’s aesthetically gorgeous. We call it our ‘little yellow bumble bee’. It’s ideally suited to the islands here. We fly low over the islands and beaches and places like that.”

Asked just how low the Cavalon could safely go, he said. “Just as low as any ultralight fixed wing aircraft. Out over the water, we can take it right next to the surface, but normally we fly at about 500 feet over water. Over residential or built-up areas, we must of course maintain safe elevations,” he said.

People familiar with both prop planes and helicopters know that both can generate a lot of noise. Asked if the Cavalon was the worst of both worlds, Pat said, “Probably less than a helicopter, but more than a normal small fixed wing aircraft. I would say it fits in nicely in between the two, both in terms of noise levels and flight characteristics,” he said.

In addition to using the aircraft to entertain friends and clients, the owners will also use it as a training aircraft for island residents who wish to learn how to fly.

“Several people have already expressed interest. Some are already pilots, but they would also like to know AutoGyro flying skills. Others are just brand new and they want to start out flying on the AutoGyro,” he said.

As the AirPark is home to the only AutoGyro dealership in the country, the owners hope to eventually see some trainees acquire their own aircraft. One advantage of the Autogyro is its versatility. It needs very limited space to operate and even less for storage because it has no wings sticking out.

History: One gun to rule them all