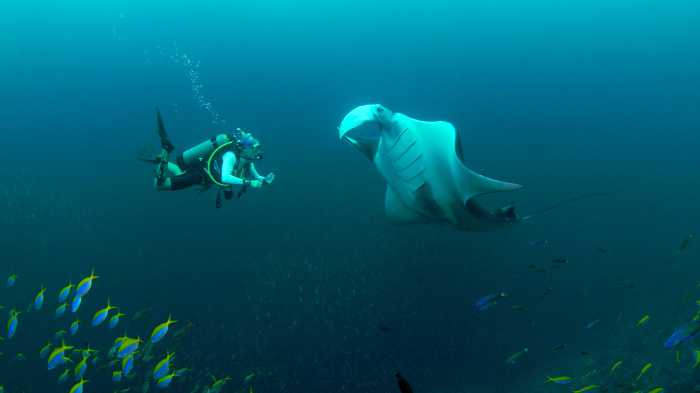 PHUKET: There comes a time for some of us, the lucky ones, when the finances are settled and we have already waded through a midlife crises to be reborn. The world is our oyster… and rather than blowing the 20 to 40 years of hard work at the proverbial oyster bar, some turn to the diving industry.

Martin Edwards is one of those lucky individuals. Happily married, 59 years old and full of drive to pursue his dreams in the underwater photography business, it is hard not to imagine the envy of those still slaving away in an office, your humble writer included.

“Retire from sales? I’ll be selling ’till the day I die mate!” Martin says when it’s suggested that he has actually retired. Though perhaps not officially retired, the life-style change is noticeable.

“Typically, a week’s work for me would involve driving 1,500-2,000 kilometers, as my territory covered Mackay – Mountain Isa through to Cairns. I was out of town every second week: leaving on a Sunday, returning Fridays. The last time, I was away 32 out of 52 weeks, when training and conferences were factored in.”

Now, Martin is most often found on either an island cruise trip or dive boat, camera kit in hand.

The deep desire to spend more time in the water with a camera isn’t a new one for Martin. Back in 1984, he got his hands on a Nikonos II with a strobe – not an easy beast to wield for 24-36 shots a tank.

“Back then, there were very few people with the skills. I was frustrated by only having ‘x’ number of shots on the film.

“I floundered for about a year before giving it up… that was when I was only diving six or seven times a year. It was back when I was a relatively new diver.”

It wasn’t until about 2002, when Martin completed his PADI Dive Master, entering the professional sphere of the industry, that he returned to the dream. A dozen years and an underwater wedding later, Martin’s new office is the Andaman ocean and the wonders that abound there.

“I like big pictures. A combination of people with marine life, whether it’s a shark, a clown fish or a manta. I like that balance – gives it depth, perspective and size,” Martin explains.

“I’ve been working in sales for thirty odd years, so I like working with people. I like to capture a candid moment, something when they aren’t blowing bubbles in front of their face…”

With a portfolio already loaded with classic giant manta ray and leopard shark shots, Martin is now looking to give more room to his artistic side as he explores the world of underwater nudes.

“It’s very hard, particularly for the models: swim up, breath hold, come down with the right expression on their face. So it’s very, very difficult for them,” Martin admits.

Nonetheless, he’s ready to get to work and bring something new into the underwater-nude-photography scene. What exactly that is? Well, Martin says we’ll just have to wait and see… either way, not a bad direction for another go at life.

History: The Thai army’s struggle for power over the navy