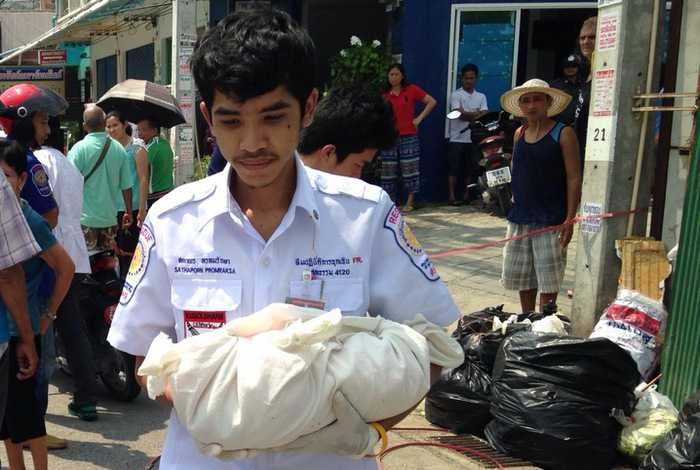 PHUKET: Police are searching for the mother of a newborn boy whose body was found dumped in a pile of trash in a small street in Patong this morning.

Laiad Pongtuan, 55, was scouring through trash while looking for plastics and other recyclables in Soi 8 off Nanai Road, when he came across a large black plastic bag.

“When I opened it up, I found a baby’s body inside,” he said.

Mr Laiad called the Patong Police and Kusoldharm Foundation rescue workers, who arrived and took the body to Patong Hospital.

“Hospital staff confirmed that the mother had delivered the child naturally and that the baby had died after birth,” said Col Chirapat.

“Upon first inspection of the body, we noticed that the baby’s neck appeared to be badly bruised. We also found sanitary napkins and undergarments at the scene.

“We believe these items belonged to the mother of the baby. We will use them to help us track her down.”

Police are questioning nearby residents and checking various CCTV footage in the hopes of identifying the mother.

“I have ordered officers to check apartment blocks in the area and to question local residents about any pregnant women they knew who might have been the mother,” explained Col Chiraphat.

“There are many apartments and worker camps in the area, but we will find out what happened.

“We need to determine why this baby was abandoned and whether or not the mother killed her son. If she did, she will be charged with murder.”