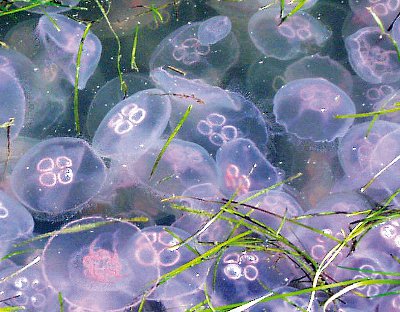 PHUKET: Directly in front of my mask, as we hang on the mooring line for our safety-stop, is a small jellyfish (jellies or sea jellies depending on your concern about the misnomer), not a box jellyfish or an infamous jelly-like Portuguese man-o-war washed up from Australia, just a little ambiguous jellyfish. Then through the bubbling of our regulators comes the dopey-baby voice of the blue tang in Finding Nemo, Dory.

The safety-stop is simply a routine, a mandatory five minutes spent at a depth of three meters to minimize decompression illness risks.

Those five minutes hanging onto the mooring line in the open blue water above a dive site like the King Cruiser is a time to reflect on what was seen and what is left to explore. A time to ponder if it’s still safe to swim into the car deck, or what swim through is worth trying to squeeze into next time – it is rarely the highlight of a dive.

Thirty seconds after finding “squishy” we are inundated, completely consumed, by an enormous bloom of jellyfish. Millions of the small medusoid carnivores fill the ocean, which moments before was empty blue.

Our visibility is cut by a third from the sheer quantity of their opaque bodies. They’re 95 per cent water, but the other five per cent was making a difference.

As the first long stinging tentacle strokes my arm, all the details about the dive on the King Cruiser, its 84-meter hull, the small school of barracuda, the flamboyant lion fish and even the enchanting structure of the wreck itself, flushes from my mind.

Each jellyfish’s tentacle is covered with thousands of cells home to nematocysts, which contain stinging threads.

The current presses the small jellyfish against our bare arms and legs, causing the threads to uncoil and the stinging cells to spring out. The venom, a neurotoxin, is designed to paralyze small prey.

A Raya dive master quickly demonstrates how to prevent the small jellyfish from getting caught between our regulator and mask by placing his hand above his mouth.

The sharp stinging continues as everyone keeps glancing down at their dive watches. Even in moderate pain it is impressive to see the divers’ discipline, especially because all I want is to be on the surface.

The heartless creatures (jelly fish have only six major body parts – no heart) aren’t letting up. Apparently 650 million years of evolution had taught them plenty about survival and nothing about manners.

Back on the boat every diver is all smiles and awkward laughs from the adventure. The Raya dive instructor is quick on the draw with a spray bottle of vinegar and soon the pain from the stings disappears. Laughing with another diver, we show off some of the thick red welts on our arms, battle wounds from a memorable dive.

Phuket Health: The doctor will see you now