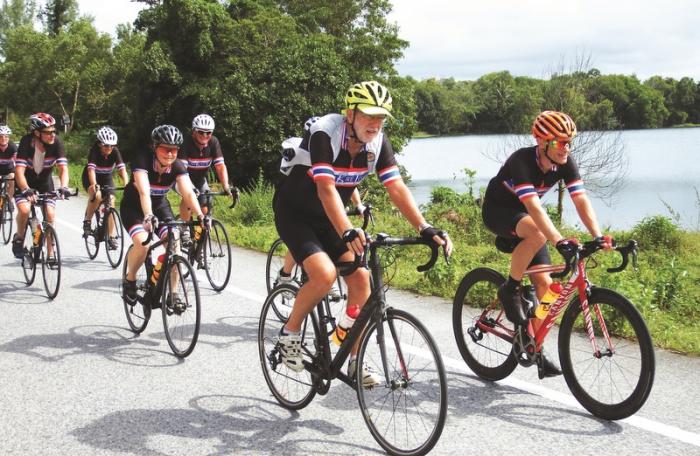 PHUKET: Born in the mountains of Switzerland and with the strength and resilience of a wiry mountain goat, it may have been Martin Brot’s destiny to become a champion cyclist. However, his journey to Thailand and his subsequent launch and management of Siam Bike Tours, now based at Canal Village in Phuket, is the stuff of adventurous legend.

Martin was born in 1958 and says that his fascination with cycling seems to have arrived with him as he lay there in his cradle. He has been involved in both mountain and road bike racing for over 40 years, but it was a holiday visit to the north of Thailand some 30 years ago that inspired his love of the country and his subsequent move here.

He hired mountain bikes and headed off up Doi Inthanon on an early trip, then over in Koh Samui, and thus he fell in love with the cycling terrain, the conducive climate and the charm and friendliness of the locals. He kept coming back for the next 20 years – later with his wife Rosita – and they cycled all over Thailand until finally in 2003 they decided to move to Phuket for its warm year-round climate and great cycling access.

Several of his European-based cycling friends suggested that he might develop an adventure cycling business in Thailand and so 11 years ago he decided to lead his first test trip, taking just four people on a week’s ride from Bangkok to Phuket. It was a remarkable success and all the participants were delighted. The rest, as they say, is history.

Martin realized that he’d discovered the basics of a thriving business, leading tours all over the country that he’d come to love and doing exactly what he had loved to do.

He launched the company originally from offices near Kata Beach and set about building a menu of group bike tours of varying duration all over Thailand. He quickly built an international following of riders, with the many coming from Europe with German, Swiss, Scandinavian and British riders to the fore.

All the tours accommodate groups of 4-30 participants and are guided by Martin and his team. The tours are suitable for any enthusiastic cyclist who is in reasonable shape. Obviously, the hot climate is a factor and Martin is at pains to ensure that new riders pace themselves and don’t over-exert. A minibus accompanies the tour and transports all luggage, spare parts, wheels, tools and so on, and offers water, soft drinks and fresh fruits throughout. Importantly, if a rider wants to take a break and rest, they can always jump aboard the bus at any stage of the tour.

Each group determines the riding speed on any stage of the trip with faster riders often going ahead and then regrouping at selected refreshment stops with the others. Safety is a major concern and all riders must wear a helmet.

The social side of the trips is as important as the riding itself and nights are spent in excellent hotels along the route, most offering a swimming pool, Thai Massage and spa facilities.

Martin’s ten-year Odyssey has seen him clock up over 200,000 kilometers leading bike tours all over Thailand and he has completed his favorite Bangkok-to-Phuket adventure no less than 90 times and still loves it, saying it is still different every time he does it.

He is a true pioneer and we owe him a debt of gratitude for his passion, endeavor and love of both cycling and Thailand.