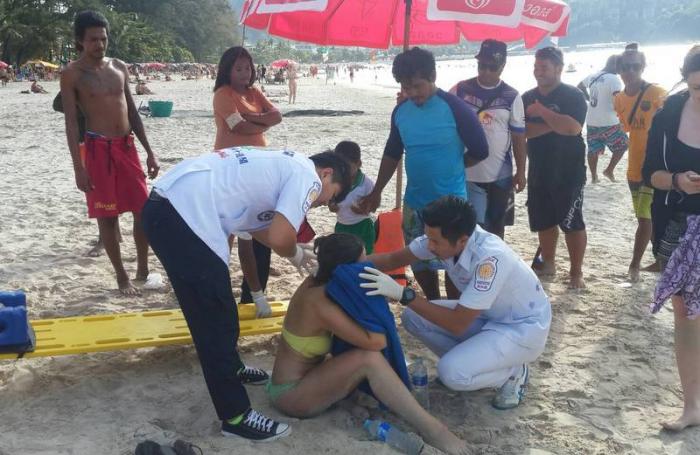 PHUKET: An Australian tourist was hospitalized after she plunged five meters into the sea while parasailing in Patong yesterday afternoon.

Sally-Ann Popovic, 26, reportedly fell out of the harness and plunged into the water below shortly after launching in front of the Banthai Resort on Patong Beach.

Police questioned the boat driver, Wissanu Srabua, and his assistant, Weerachart Hon, who had strapped Ms Popovic into the harness. They also questioned the business owner, Waewta Srithongkul, who immediately denied any equipment failure and rejected any responsibility based on that.

“Ms Waewta insisted that her staff had tied the rope firmly and that she had no idea how the tourist fell,” said Patong Police captain Yingyong Chuoykij. “We checked the hooks on the parasail and they were neither twisted nor damaged.”

Ms Popovic was staying at the Add Plus hotel in Patong and had paid 1,000 baht for one round of parasailing.

“Rescue workers at the scene tended to her left ear, which was bleeding after the fall. Fortunately, she was conscious the whole time,” said Capt Yingyong.

Ms Popovic was admitted to Patong Hospital for observation. It is not yet clear whether she has suffered hearing loss.

Police have not pressed any charges against the boat operators and are awaiting the victim’s recovery to discuss compensation, if any.