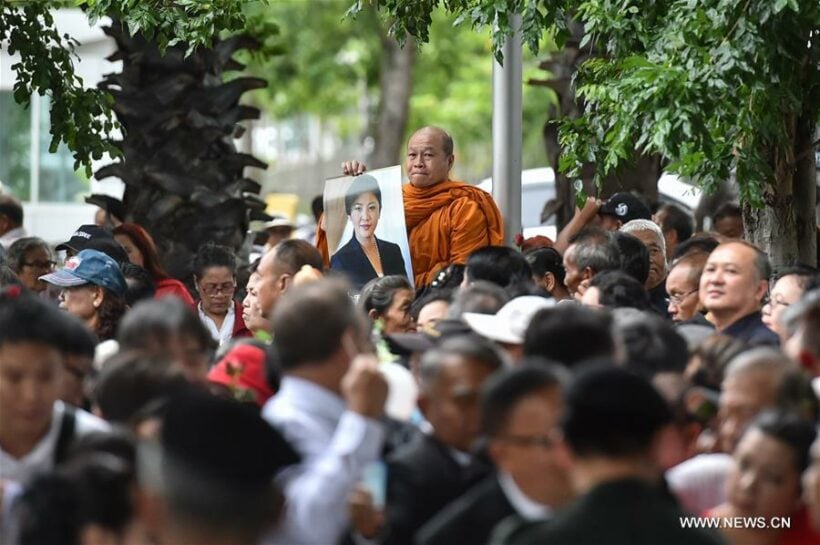 Thailand’s Supreme Court has issued an arrest warrant against former PM Yingluck Shinawatra after she was a no-show at today’s verdict announcement in the negligence trial involving her Government’s rice-pledging scheme.

The verdict has now been postponed to September 27. The Court has also ordered the seizure of the 30 million Baht bail.

If Khun Yingluck doesn’t show up on September 27, the Court can read the verdict without her appearance.

Yingluck’s lawyer told the Court that she was sick from Meniere’s disease and asked to delay the ruling without a medical certificate confirming her illness.

The court considered Yingluck lawyer’s request then threw out the claim that she would be unable to attend today’s hearing.

The presiding Judge went further, convinced Yingluck had absconded, and ordered an arrest warrant plus the seizure of the the 30 million Baht bail money.

The drama continued outside the Court room when Yingluck’s lawyer, Norawich Larlang, said he was informed by a source at 8 am this morning that Yingluck is not unwell. He went to say that he did not know Yingluck’s whereabouts or whether or not she is still in the Kingdom.

Like her brother, Thaksin Shinawatra, for now Yingluck is a fugitive of the law following her non-appearance at the Court and subsequent arrest order.

Thousands of her supporters gathered outside the Supreme Court this morning.

The 50 year old former Prime Minister was last seen on Wednesday when she visited several temples to make merits and pray for good luck.

Back in Bangkok after Phuket court case dropped