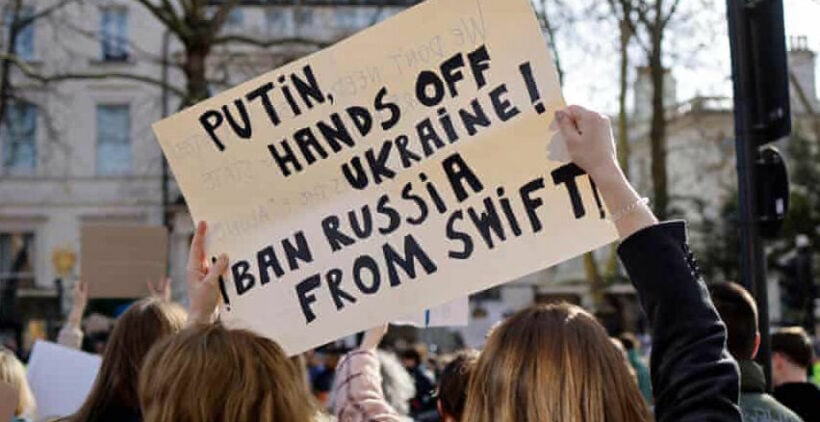 The US, European Commission, UK, France, Germany, Italy and Canada have announced they will cut “certain Russian banks” off from the world’s SWIFT bank code system, the global security network that connects thousands of financial institutions.

The group said they will “collectively ensure that this war is a strategic failure for Putin”.

“This will ensure that these banks are disconnected from the international financial system and harm their ability to operate globally… restrictive measures that will prevent the Russian Central Bank from deploying its international reserves in ways that undermine the impact of our sanctions.”

US and EU officials are also looking to target the Russian Central Bank with additional sanctions, an unprecedented step for one of the world’s largest economies.

The Society for Worldwide Interbank Financial Telecommunication (SWIFT) was founded in 1973 and is now used by over 11,000 financial institutions to send secure messages and payments around the world. It’s regarded as the only internationally accepted “financial plumbing” for world financial transactions.

Final details have not yet been announced but the announcement is a dramatic escalation of the West’s attempts to isolate and punish President Putin and the Russian state.

At his first media conference on the invasion on Thursday, US President Biden said they would not be using the large financial SWIFT stick as a weapon in the first salvo of sanctions, despite calls from the Ukraine leadership.

48 hours later, the US had come up with an initial plan to target “certain banks” and remove their access to the SWIFT code system. Just about all international financial transactions need a SWIFT code to complete a payment.

“The $600 billion-plus war chest of Russia’s foreign reserves is only powerful if Putin can use it, and without being able to buy the ruble from Western financial institutions, for example, Putin’s central bank will lose the ability to offset the impact of our sanctions.”

“…this is Putin’s war choice. And only Putin can decide how much more cost he’s willing to bear. The United States and our allies and partners are unified and will continue to impose costs.”

Earlier, Nikolai Zhuravlev, vice speaker of Russia’s upper house of parliament, was quoted in the state-owned TASS news saying “that shipments of oil, gas and metals to Europe would stop if that happened”.

“If Russia is disconnected from SWIFT, then we will not receive foreign currency, but buyers, European countries in the first place, will not receive our goods… oil, gas, metals and other important components.”

Removing Russia from the world’s SWIFT network will not only damage Russia but also big economies in Europe, especially in the energy sector. It will certainly make delivering commodities and services almost impossible for Russian companies and their foreign customers, particularly anything denominated in US dollars.

But the devil will be in the detail and, at this stage, the details on exactly which banks are being de-SWIFTed are yet to be announced. But the US and allies have already levied sanctions targeting Russia’s financial sector, including Russia’s largest lenders and say they are now committed to targeting “high wealth” Russians living overseas.

Stardust
10 hours ago, Noble_Design said: You cannot fight a battle in installments, if the EU is serious with Russia they should stop the flow of oil and gas immediately. You don't tell your adversary Ok I'm going to fight with…

Soidog
21 hours ago, longwood50 said: That comes with a risk as well. There is no more dangerous animal than one who feels cornered and with nothing to lose. Russia is really a third world country with a nuclear capability. Wise…
TWS60
Putin appears to be shifting to a brute force war of attrition, mounting civilian body count meant to pressure and persuade Zelensky to surrender, or until he's killed in one of the bombardments. Small bright spot is fuzzy reports of…
arnoldcarter
Ukraine is a beautiful country with wonderful people. I personally became convinced of this after my trip to Chernobyl last year. I have never experienced anything like it in my life. Wonderful people who accepted me as their own. I…

King Cotton
38 minutes ago, arnoldcarter said: Ukraine is a beautiful country with wonderful people. I personally became convinced of this after my trip to Chernobyl last year. I have never experienced anything like it in my life. Wonderful people who accepted…

Ukraine and Russia to meet for talks at Belarus border