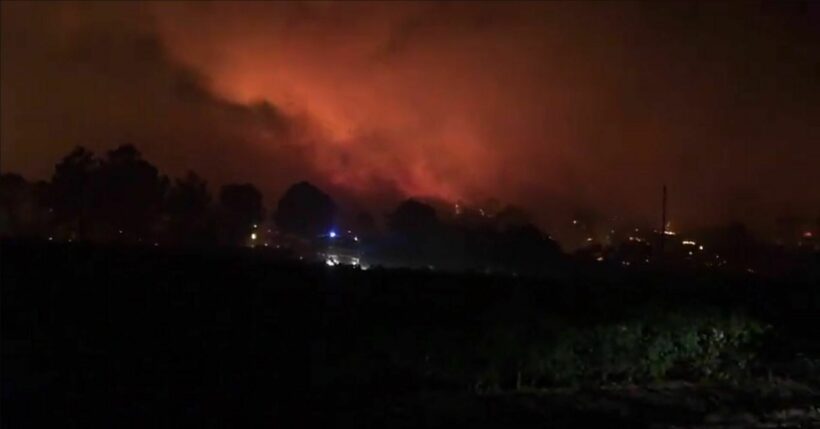 A wildfire in the Saint-Tropez region of Southern France has forced thousands of people to evacuate, says the fire service today.

AFP reports that round around 750 firefighters responded to the fire while Reuters estimates the number of firefighters is closer to 900. Aircraft also dropped water on the blaze. The high temperatures and strong winds made the situation even more difficult for people fleeing and firefighters.

“Thousands of people have been evacuated as a precautionary measure, but there are no victims,” says fire service spokesperson, Delphine Vienco. Delphine adds that blaze is “still very fierce”.

The mayor of the nearby town Cogolin, Marc-Etienne Lansade, says the fire spread at an incredible speed, with unbelievable strength.

The fire erupted yesterday at a motorway stop around 100 kilometres northeast of Toulon. By this morning, the fire had spread to 3,500 hectares of forest/scrubland, according to the fire department.

Delphine says it may be too early to tell if the damaged area is restricted to 3,500 hectares. In fact, Reuters later stated that the damage has spread to at least 5,000 hectares and the damage still hasn’t been fully calculated.

Police are still investigating the cause of the fire. More than 100 homes have already been affected.

DiJoDavO
News since a year or 2 is either covid or wildfires. Like, isn't there any positive news or something?  It's funny how, if I look out of my window, I literally hear crickets and birds singing happily. Then I look…

Zool
Some pretty big fires in Greece too. Is it a particularly dry season in Europe this year?