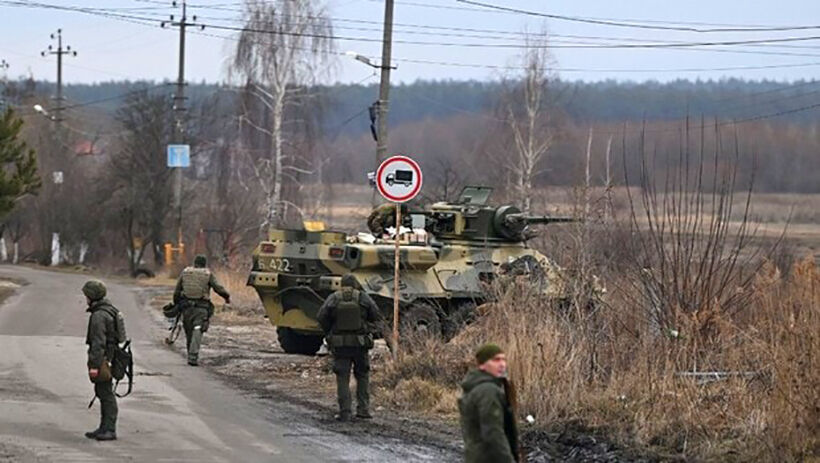 Tracking the latest with the ongoing invasion of Ukraine by Russia…

Russian forces are continuing to advance towards Ukraine’s capital, Kyiv, in what’s seen as a direct attack on the capital and seat of Ukrainian government. President Zelenskyy claimed in a recorded broadcast that Russian troops “would attempt to take” the capital city Kyiv during the night.

“This night will be more difficult than the day. Many cities of our state are under attack.”

As the UN Security Council mount a vote to condemn the Russian attack on Ukraine, Russia vetoes the vote from taking place. Russia is still a member of the security council, still historically referred to as the ’Soviet Union’ in the council minutes.

China abstained from the vote, a move diplomatic pundits see as a win for supporting Russia’s international isolation. The UAE and India also abstained from the Council vote on the US-drafted text. The remaining 11 council members voted in favour of ‘condemnation’.

Following the veto, the UN Secretary-General Antonio Guterres has called on soldiers in Russia’s war on Ukraine to “return to their barracks” in another procedural comment following Thursday’s invasion.

“We must never give up. We must give peace another chance.”

Ukraine officials are trying to meet with Russian officials to broker a ceasefire. A spokesperson for the Ukrainian President Zelenskyy says they are keen to have discussions over a ceasefire.

The Kremlin announced earlier yesterday (Moscow time) that “it had offered to meet with Ukrainian officials in the Belarusian capital Minsk, but that Ukraine had instead proposed Warsaw as an alternative venue, resulting in a stand-off. But said…

“Ukraine was and remains ready to talk about a ceasefire and peace.”

It’s been estimated that more than 50,000 Ukrainians have already fled Ukraine into bordering countries since the fighting started.

In the south of Ukraine, Russian warships have shelled two foreign-flagged ships – a Moldovan-flagged chemical tanker and a Panamanian-flagged cargo ship. Both were preparing to offload grain at the Odessa port in the Black Sea.

On Thursday, a Turkish-owned Yasa Jupiter cargo ship was shelled off Odessa as well.

The US, despite relatively muted sanctions up to date, has now announced it will specifically sanction the Russian President Vladimir Putin and his Foreign Minister Sergey Lavrov.

Meanwhile, back in the US, the White House has asked Congress to approve US$6.4 billion in funding to address the Ukraine crisis. US$2.9 billion would be for security and humanitarian assistance and another US$3.5 billion for the Department of Defense.

The conflict is being shared, in intimate detail, across social media platforms as Ukrainians try and ensure that the story from within Ukraine reaches the outside world.

Freeduhdumb
Farce is the apt word here... or the expression by Raum Emanuel.. never let a crisis go to waste.