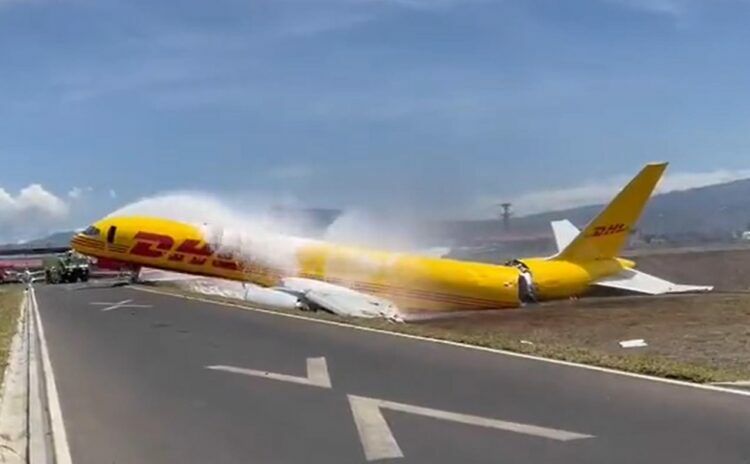 Boeing’s series of bad media, whether directly at fault or not, continues after a DHL Boeing 757-200 cargo aircraft crash landed and split into two, losing its tail end at Costa Rica’s Juan Santamaria international airport yesterday.

The crew managed to escape the yellow DHL cargo plane and came out of the incident unharmed. The aircraft was bound for Guatemala when it apparently had a mechanical failure in its hydraulic system, prompting the pilot to make an emergency landing shortly after take off.

A video (below) of the incident shows the plane landing and skidding off the runway before splitting into two and producing a huge cloud of smoke. DHL said the crew escaped unharmed and one member was undergoing a precautionary medical review following the crash.

Deputy Director of Costa Rica’s Civil Aviation society Luis Miranda Munoz said the aircraft, built in 1999, suffered a failure in its hydraulic systems which are vital to landing the aircraft as they move and actuate landing gears, flaps and brakes.

If the crash is found to be caused by a mechanical malfunction as expected, Boeing will be put under even more international scrutiny as if the public’s trust in the aviation giant hadn’t already been shaken following the series of problems occurring with Boeing aircraft in recent times (including the two 737 Max fatal crashes in 2018 and 2019, the 737-800 fatal crash in China in March, the ‘dive’ of a Malaysian Airline 737-800 last Sunday, and an Air France Boeing 777 landing safely following a ‘serious incident’ when computer software went rogue during final approach last Tuesday).

Earlier this year, Netflix released a documentary entitled “Downfall: The Case Against Boeing” about the investigation into the two disastrous Boeing 737 MAX crashes that killed all 346 passengers onboard the two flights in 2018 and 2019.

Juan Santamaria International Airport closed for five hours following the incident in Costa Rica yesterday. Around 8,500 passengers and 57 commercial and cargo flights were impacted by the closure.

A much clearer version of the crash landing has emerged!

NB. It should be noted, despite the coincidence of recent bad press, the Boeing 737-800, the 777 range and the 757 (as mentioned in this article) have an excellent safety record. The Boeing 737-800, in particular, is one of the most popular planes over the past 20 years, and certainly one of the safest – The Thaiger

Tim_Melb
23 hours ago, NorskTiger said: Seems like a boing is falling down every week now. Lufthansa is becoming more and more appreciated. Lufthansa is an airline not a manufacturer. FYI Lufthansa does lean more towards Airbus manufactured aircraft but they…

palooka
10 hours ago, KaptainRob said: This video shows the incident more clearly Thanks for posting the video, does show a great deal more.
oldschooler
4 hours ago, butterfly said: when booking a flight, make sure it's AIRBUS Lufthansa it is these days, flying with THAI is starting to feel dangerous, not sure how they maintained their BOEING fleet during COVID, or if they paid…
Tim_Melb
23 hours ago, oldschooler said: No. Make sure it’s a first rate European / East Asian AIRLINE. Perfectly happy to fly ANY aircraft if the airline is top notch. Go and pedal your racist rubbish somewhere else.
oldschooler
1 minute ago, Tim_Melb said: Go and pedal your racist rubbish somewhere else. The rational basis for my airline preferences is Safety then Service / Convenience / Cost, based on Experience. Excluding geographical regions of different types including North America…