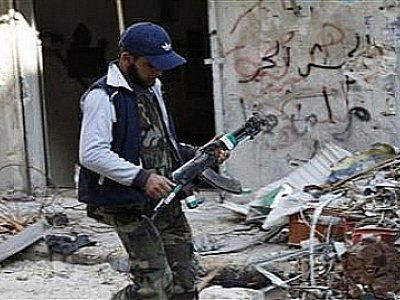 
France recognises new Syria opposition
Reuters / Phuket Gazette
PHUKET: France became the first European power to recognize Syria’s new opposition coalition as the sole representative of its people and said yesterday it would look into arming rebels against President Bashar al-Assad once they form a government.

Twenty months into their bloody uprising against Assad, fragmented Syrian opposition groups struck a deal in Qatar on Sunday to form a broad coalition and their leader immediately appealed for European backing.

“I announce today that France recognizes the Syrian National Council as the sole legitimate representative of the Syrian people and as future government of a democratic Syria making it possible to bring an end to Bashar al-Assad’s regime,” French President Francois Hollande said, breaking ranks with European allies. Six Gulf Arab states took a similar step on Monday.

The question of arming the rebels would be looked at as soon as the rebel coalition formed a transitional government, Hollande told a news conference in Paris.

Arab League and EU foreign ministers meeting in Cairo welcomed the formation of the coalition as an important step forward, although their communiqué showed they had not reached a unanimous decision to recognize it as Syria’s sole authority.

The French announcement came just hours after Syria’s newly installed opposition leader urged European states to back the opposition so it could buy weapons.

Paris, one of Assad’s harshest critics, had previously ruled out arming rebel forces, concerned that weapons could get into the hands of radical Islamists.

Speaking to Reuters as Arab and European ministers met to discuss Syria at the Arab League in Cairo, Mouaz Alkhatib, the Damascus preacher elected unopposed on Sunday to lead the new group, had asked for diplomatic backing.

“I request European states to grant political recognition to the coalition as the legitimate representative of the Syrian people and to give it financial support,” he said.

“When we get political recognition, this will allow the coalition to act as a government and hence acquire weapons and this will solve our problems,” added Alkhatib, who has been described by supporters as a moderate noted for his embrace of Syria’s religious and ethnic minorities.

So far, concerted action on Syria has been thwarted by divisions within the opposition, as well as by big power rivalries and a regional divide between Sunni Muslim foes of Assad and his Shi’ite allies in Iran and Lebanon.

Russia and China, which have lent Assad diplomatic support since the uprising erupted in March last year, have shown no sign of warming towards his Western- and Arab-backed opponents.

“Step forward”
Cajoled by Qatar and the United States, the ineffectual Syrian National Council, previously the main opposition body based abroad, agreed to join a wider coalition on Sunday.

Britain’s foreign minister, William Hague, said the coalition must show it had support within Syria before London would acknowledge it as the rightful government.

“If they have this, yes, we will then recognize them as the legitimate representative of the Syrian people,” he told reporters at the Arab-European meeting in Cairo.

The opposition had hoped its new-found unity would clear the way for outside powers to arm the rebels, but Western nations fear such weapons could reach the hands of Islamist militants.

Western concern has also been heightened by documented reports of atrocities by ill-disciplined insurgents.

“Syria’s newly created opposition front should send a clear message to opposition fighters that they must adhere to the laws of war and human rights law, and that violators will be held accountable,” New York-based Human Rights Watch said.
Border violence
Assad, whose family has ruled Syria for 42 years, has vowed to fight to the death in a conflict that has already killed an estimated 38,000 people and risks sucking in other countries.

His warplanes again struck homes in Ras al-Ain, a town on the northern border seized by rebels last week. Civilians fled over the border dividing it from the Turkish town of Ceylanpinar and thick plumes of smoke billowed upwards.

Syrian jets and artillery hit the town of Albu Kamal on the frontier with Iraq, where rebels have seized some areas, according to the mayor of the Iraqi border town of Qaim.

Tension also remained high on the Golan Heights, where Israeli gunners have retaliated against stray Syrian mortar fire landing on the occupied plateau in the previous two days.

Twenty months of conflict have created a vast humanitarian crisis, with more than 408,000 Syrians fleeing to neighboring countries and up to four million expected to need aid by early next year, according to the United Nations.

“If anything, they believe it could be more; this is a very conservative estimate,” Melissa Fleming, chief spokeswoman of the U.N. High Commissioner for Refugees, said in Geneva.

“So people are moving, really on the run, hiding,” she told a news briefing. “They are difficult to count and access.”

But although six Gulf Arab nations recognized the coalition as Syria’s only legitimate representative on Monday, Iraq, Algeria and Lebanon prevented the League from following suit.

Iraq and Lebanon, with influential Shi’ite populations, have generally maintained better relations with Iran and with Assad, whose minority Alawite sect is an offshoot of Shi’ite Islam.

Foreign Minister Sergei Lavrov is hoping to raise Moscow’s profile in a region where its influence is at risk after blocking three U.N. resolutions meant to put pressure on Syrian President Bashar al-Assad to end the bloodshed.

The Syrian uprising, which has cost 38,000 lives in 20 months, has further strained traditionally uneasy ties between Russia and Saudi Arabia, a key ally of the United States.

The trip to Riyadh is Lavrov’s second Middle East visit in less than two weeks. Last week in Cairo he embraced an Egyptian-backed drive to bring together four regional powers to seek a solution to the Syrian crisis.

Lavrov’s efforts to persuade Saudi Arabia to back the inclusion of Iran in peace efforts are seen as unlikely to succeed.

“Lavrov has supported Egypt’s regional quartet initiative, but the problem there is that the Saudis don’t want to take part in a format that includes Iran. So he will be trying to c