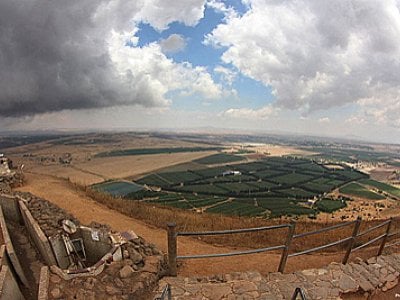 PHUKET: Israel’s army fired tank shells into Syria yesterday and scored “direct hits” in response to a Syrian mortar shell that struck the Israeli-occupied Golan Heights, the Israeli military said in a statement.

It was the second time in as many days that Israel had fired across the disengagement line drawn at the end of a war in 1973, underscoring international fears that Syria’s civil war could ignite a broader regional conflict.

On Sunday the military said it had a fired a guided missile into Syria in a potent “warning shot” after errant mortar fire had fallen on land that Israel seized in a 1967 war.

Israel upped the ante and carried through with a threat to target directly anyone firing across the lines.

“A short while ago, a mortar shell hit an open area in the vicinity of an (Israeli Defense Forces) post in the central Golan Heights, as part of the internal conflict inside Syria, causing no damage or injuries,” the military statement said.

“In response, IDF soldiers fired tank shells towards the source of the fire, confirming direct hits. The IDF has filed a complaint with the U.N. forces operating in the area, stating that fire emanating from Syria into Israel will not be tolerated and shall be responded to with severity.”

Syrian rebels fighting to topple President Bashar al-Assad have been battling his army for months in towns inside and adjacent to the Area of Separation between Israel and Syria, along the disengagement line from the 1973 war.

Technically the countries are still at war, but the Golan, a strategic plateau, has been largely quiet for decades.

Israeli Prime Minister Benjamin Netanyahu said yesterday: “We will not allow our borders to be breached and our citizens to be fired at.”

Assad caution
Earlier yesterday, Israel’s Minister of Strategic Affairs Moshe Yaalon said he did not believe Assad wanted to wage war with Israel, saying it was the last thing the Syrian leader needed as he struggled to maintain his grip on power.

“In my estimation, there is almost no doubt that he has no interest in opening a front,” he told Army Radio.

“He understands this. He is very careful. He responded to messages that were passed through different channels, and not just by us. Regarding chemical weapons and fighting on the border,” he added, giving no further details.

Spill over violence this month from Syria onto the Golan has jangled the nerves of Israelis worried the front will add to threats facing the Jewish state from Islamic militants in neighboring Lebanon, Gaza and Egypt’s Sinai.

There have been similar worries in Turkey, Jordan and Lebanon about incidents on their own borders with Syria, where forces loyal to Assad have been fighting rebels for 19 months.

There was no immediate comment from the 1,000-man United Nations Disengagement Observer Force that patrols the Golan Heights disengagement area.

The secretary general of the United Nations, Ban ki-Moon, has expressed deep concern about the potential for escalation, his office said in a statement late on Sunday.

“He calls for the utmost restraint and urges Syria and Israel to uphold the Disengagement Agreement, respect their mutual obligations, and halt firing of any kind across the ceasefire line.”

International Sports: Summary of the latest news and action