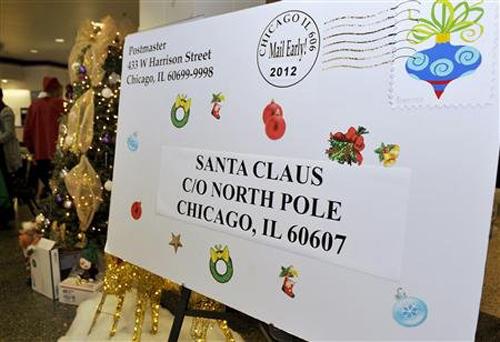 PHUKET: One 13-year-old boy who sent a “Dear Santa” letter to the U.S. Post Office this year asked only for covers for his bed, “so I can stay warm this winter.”

Another letter from a 12-year-old wanted nothing for himself, just something for his single mother, because she worked so hard.

Heartrending letters like these are sent each year to the Post Office “Letters to Santa” program, now in its 100th year.

Postal employees go through the hundreds of thousands of letters addressed to “Santa Claus, North Pole, Alaska” to separate out those that express serious need.

Some of the letters are answered by charitable groups, businesses, schools, postal employees and individual anonymous givers, who can come to participating branches, pick letters and go shopping.

The Chicago branch has already seen 18,000 letters come in – with more arriving every day, said communications director and “Chief Elf” Robin Anderson on Tuesday. She expects about 2,500 will be answered. The New York “Operation Santa” program is the country’s largest, receiving more than a half a million letters each season.

Letters this year are reflecting a greater need for necessities, and have included more letters from adults looking for work who need help buying for their children, according to both Chicago postal workers and givers.

“You’re reading letters from six-year-old, eight-year-old kids who aren’t asking for video games, they’re asking for winter coats and food on the table, which is not something you’d think of kids writing to Santa for,” said Kelley Fernandez, 26, who along with her colleague Debbie Schmidt, 53, who work for Toji Trading Group and have answered letters from Santa for three years.

Last year, Schmidt and Fernandez got other colleagues involved, and this year the whole Chicago office plus the Singapore office participated. The employees bought gifts for 26 families this year, including 106 children – at 40 boxes the largest “Santa” shipment this year from the Chicago branch.

Anyone who wants to adopt a letter at a participating branch must fill out a form and show a picture ID. Then the giver comes back with a gift by December 22 to match the letter, and pays for postage.

To protect the privacy of the recipients, the full names and addresses are known only to the U.S. Post Office, which delivers the gifts.

One man who is an annual giver to the Santa program in Chicago used to be a recipient himself, said Anderson.

Schmidt and Fernandez say they bring a box of tissues to read the letters, because they can be so emotional. Fernandez recalled that last year, a little girl wrote, “Dear Santa, we’re staying with our auntie because our mother can no longer take care of us, and we want you to know where we are this year.”

Schmidt said she and her co-workers are sending handwritten letters back to the families along with the presents, signed by Santa. “We let everything be from Santa,” she said. “The kids are so young, and still believe in Santa.”

World News: White House outlines plans to “get the guns”