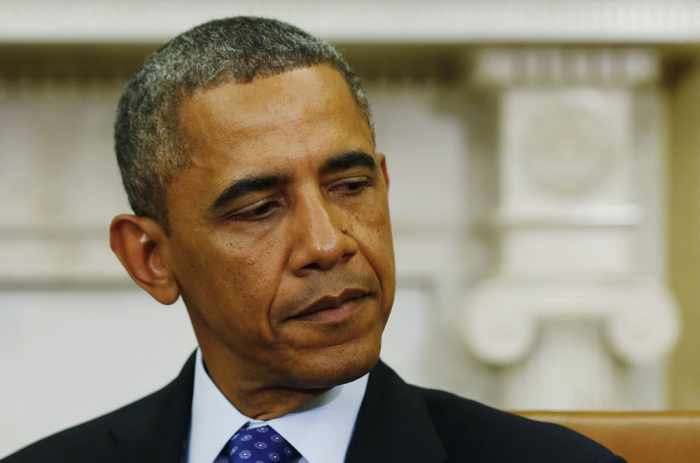 Islamic State fighters, who have beheaded and crucified captives in their drive to eradicate unbelievers, have advanced to within a half hour’s drive of Arbil, capital of Iraq’s Kurdish region and a hub for U.S. oil companies.

They have also seized control of Iraq’s biggest dam, Kurdish authorities confirmed on Friday, which could allow them to flood cities and cut off vital water and electricity supplies.

A Pentagon spokesman said two F/A-18 aircraft from an aircraft carrier in the Gulf had dropped laser-guided 500-pound bombs on a mobile artillery piece used by the fighters to shell Kurdish forces defending Arbil.

Obama authorised the first U.S. air strikes on Iraq since he pulled all troops out in 2011, arguing action was needed to halt the Islamist advance, protect Americans and safeguard hundreds of thousands of Christians and members of other religious minorities who have fled for their lives.

The United States also dropped relief supplies to members of the ancient Yazidi sect, tens of thousands of whom are massed on a desert mountaintop seeking shelter from fighters who had ordered them to convert or die.

“Earlier this week, one Iraqi in the area cried to the world, ‘There is no one coming to help’,” said Obama in a late night television address to the nation on Thursday. “Well, today America is coming to help.”

“We can act carefully and responsibly to prevent a potential act of genocide,” he said. On Friday the White House said the strikes would last as long as the security situation required.

The Islamic State was defiant. A fighter told Reuters by telephone the U.S. air strikes would have “no impact on us”.

“The planes attack positions they think are strategic, but this is not how we operate. We are trained for guerrilla street war,” he said. “God is with us and our promise is heaven. When we are promised heaven, do you think death will stop us?”

The advance of the Sunni militants, who also control a third of Syria and have fought this past week in Lebanon, has sounded alarm across the Middle East and threatens to unravel Iraq, a country divided between Shi’ites, Sunnis and Kurds.

The U.S. airstrikes prompted renewed calls on jihadi online forums for attacks on the United States and oil interests in the Gulf. “The mujahideen must strive … to discipline America and its criminal soldiers,” the SITE monitoring service quoted one such message, on the Shumukh al-Islam jihadi forum, as saying.

In Baghdad, where politicians have been paralysed by infighting while the state falls apart, the top Shi’ite cleric all but demanded Prime Minister Nuri al-Maliki quit, a bold intervention that could bring the veteran ruler down.

Sunni fighters from the Islamic State, an al Qaeda offshoot rejected as too extreme by Osama bin Laden’s successors, have swept through northern Iraq since June. Their advance has dramatically accelerated in the past week when they routed Kurdish troops near the Kurdish autonomous region in the north.

Attention has focused on the plight of Yazidis, Christians and other minority groups in northern Iraq, which has been one of the most diverse parts of the Middle East for centuries.

“The stakes for Iraq’s future can also not be clearer,” U.S. Secretary of State John Kerry said on Friday. The Islamic State’s “campaign of terror against the innocent, including the Christian minority, and its grotesque targeted acts of violence show all the warning signs of genocide.”

The U.S. Defense Department said planes dropped 72 bundles of supplies, including 8,000 ready-to-eat meals and thousands of gallons of drinking water, for threatened civilians near Sinjar, home of the Yazidis, ethnic Kurds who practice an ancient faith related to Zoroastrianism.

The Islamic State considers them to be “devil worshippers”. After fighters ordered them to leave, convert or die, most fled their towns and villages to camp out on Sinjar mountain, an arid peak where they believe Noah settled after the biblical flood.

“After we fled to the mountain, I returned one day to recover belongings and I saw the bodies of the elderly disabled men who had been shot dead by the Islamic State. They were too old to flee. I can’t forget that scene,” said Akram Edo, who escaped to Kurdish-held territory with seven children.

His brother Hameed Edo, still back on the mountain with five children, told Reuters by telephone water was running out and no aid had arrived for the civilians trapped in the wilderness.

Mahma Khalil, a Yazidi lawmaker in Baghdad, said: “We hear through the media there is American help, but there is nothing on the ground…. Please save us! SOS! save us!” he said. “Our people are in the desert. They are exposed to a genocide.”

Witnesses said later that Kurdish fighters from Turkey’s PKK had helped an unspecified number of people off the mountain. It was not possible to confirm the involvement of the PKK, which would risk dragging Turkey into the conflict.

In the Kurdish capital, suddenly near the front line for the first time after a decade of war, defiant residents said they were stockpiling weapons and prepared to defend the city.

“People with children took them to their families (outside Arbil), but the men have stayed,” said Abu Blind, 44, working at a tea stall in Arbil bazaar. “They will have to trample over our dead bodies to reach Arbil.”

The Kurdish region has until now been the only part of Iraq to survive the past decade of civil war without a serious security threat. Its vaunted “peshmerga” fighters – those who confront death – also controlled wide stretches of territory outside the autonomous zone, which served as sanctuary for fleeing Christians and other minorities when Islamic State fighters arrived in the region last month.

But the past week saw the peshmerga crumble in the face of an advance by the fighters, who have heavy weapons they seized from Iraqi army troops that abandoned their posts in June. In addition, the fighters are flush with cash looted from banks.

Christians, many of them already refugees who had sought shelter in peshmerga-controlled areas, were suddenly forced to flee. Tens of thousands of Christians fled on Thursday when the Islamic State overran their hometown, Qaraqosh.

Shamil Abu Madian, a 45-year-old Christian, told Reuters he had first quit the city of Mosul when it fell in June. He initially sheltered in a town protected by the peshmerga, but was forced to flee again in panic in the middle of the night when the Kurdish peshmerga troops suddenly vanished.

“We were not able to take anything with us except some clothes in a nylon bag,” he said. “People are living on sidewalks, in public gardens, anywhere.”

A United Nations humanitarian spokesman said some 200,000 people fleeing the Islamists’ advance had reached the town of Dohuk on the Tigris River in Iraqi Kurdistan and nearby areas of Nineveh province. Tens of thousands had fled further north to the Turkish border, Turkish officials said.

Maliki, a Shi’ite Islamist accused by foes of fuelling the Sunni revol