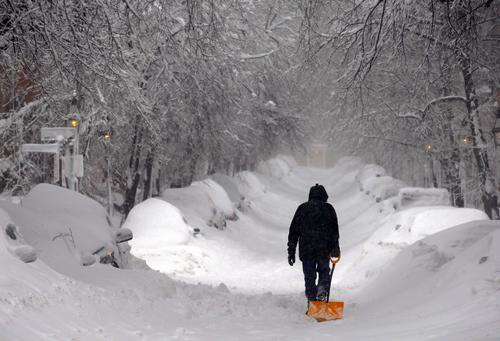 PHUKET: The U.S. Northeast was digging itself out yesterday after a blizzard dumped up to 40 inches (one meter) of snow with hurricane force winds, killing at least nine people and leaving hundreds of thousands without power.

As the Northeast cleared roads and shoveled out, another storm bore down on the Northern Plains and tornadoes threatened the Southeast in a weekend of extreme weather across the United States.

A tornado which appeared to be a mile wide touched down in Hattiesburg, Mississippi, causing significant damage, said Anna Weber of the National Weather Service. The twister also hit the nearby town of Petal where it destroyed a brick building.

In New York City trucks ploughed through residential streets, piling snow even higher at the edges and leaving thousands of motorists to dig out their buried vehicles.

Another round of severe weather today could bring more misery, with freezing rain and more snow predicted that would make the evening commute even more difficult.

In Boston, Mayor Tom Menino canceled school after touring neighborhoods throughout the city, where two feet (60 cm) of snow fell.

Utility companies reported that some 350,000 customers were still without electricity across nine states after the wet, heavy snow brought down tree branches and power lines.

Air traffic began to return to normal after some 5,800 flights were canceled on Friday and Saturday, according to Flightaware, a flight-tracking service.

Rare travel bans in Connecticut and Massachusetts were lifted but roads throughout the region remained treacherous, according to state transportation departments.

In Cambridge, Massachusetts, residents were digging out their cars and driveways under clear blue skies yesterday afternoon.

As the region recovered, another large winter storm building across the Northern Plains was expected to leave a foot (30 cm)of snow and bring high winds from Colorado to central Minnesota today, the National Weather Service said.

South Dakota was expected to be hardest hit, with winds seen reaching 50 miles per hour (80 kph), which would create white-out conditions. The storm was expected to reach parts of Nebraska, North Dakota, Wyoming and Wisconsin.

South Dakota officials closed a 150-mile (240-km) stretch of Interstate 90 in the center of the state. They also closed 75 miles (120 km) of Interstate 29 in the state’s north-eastern corner near North Dakota.

Officials said motels and other facilities along Interstate 90 were filling up with travellers trying to avoid the heavy drifting and near-zero visibility.

“Travel will be difficult to impossible at times on other highways in many areas of South Dakota,” state transportation officials said in a statement.

The Connecticut town of Hamden had 40 inches (101 cm) and nearby Milford 38 inches (96.5 cm), the National Weather Service said.

New York Governor Andrew Cuomo said 675 pieces of equipment and 975 personnel had been dispatched to help Suffolk County, making up the eastern half of Long Island, dig out of 3 feet of snow.

The storm “effectively shut down the entire region,” Cuomo said in a statement.

Amtrak ran a limited train service between New York and Boston yesterday and a regular Sunday schedule from New York to the state capital in Albany.

The Massachusetts Bay Transportation Authority said it had resumed limited service on Sunday afternoon and would return to regular service today.

Clegg said most city roads had been cleared by last night, and city employees were set to begin ploughing Portland’s “100 miles of sidewalks.”

Winds gusted to 83 miles per hour (134 kph) at Cuttyhunk, New York, and brought down trees across the region.

The storm contributed to at least five deaths in Connecticut and two each in New York state and Boston, authorities said.

The two deaths in Boston were separate incidents of carbon monoxide poisoning in cars, an 11-year-old boy and a man in his early 20s. The boy had climbed into the family car to keep warm while his father cleared snow. The engine was running but the exhaust was blocked by snow, said authorities.

In Rutland, Vermont, the snow helped solve a crime, said Rutland police Sergeant James Tarbell. After a burglar alarm went off at a gas station in the small hours of the morning, police found a broken window and discovered someone had stolen cartons of cigarettes, said Tarbell.

A trail of footprints in the snow led the police to a nearby street, where they found a 42-year old man shovelling snow.

“It was an ungodly hour to be shovelling snow,” Tarbell said. Police arrested the man and found a duffel bag full of cigarettes on the front porch of the house.