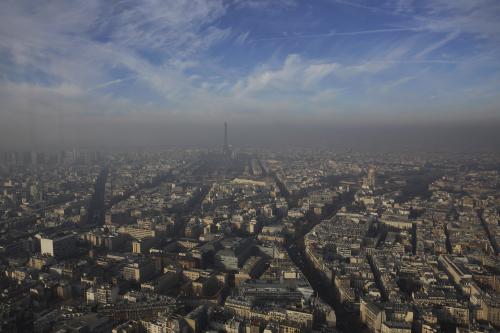 
World may have to suck gases from air to meet climate goals – U.N.
Reuters / Phuket Gazette
PHUKET: Governments may have to extract vast amounts of greenhouse gases from the air by 2100 to achieve a target for limiting global warming, backed by trillion-dollar shifts towards clean energy, a draft U.N. report showed on Wednesday.

A 29-page summary for policymakers, seen by Reuters, says most scenarios show that rising world emissions will have to plunge by 40 to 70 percent between 2010 and 2050 to give a good chance of restricting warming to U.N. targets.

The report, outlining solutions to climate change, is due to be published in Germany in April after editing by the Intergovernmental Panel on Climate Change (IPCC). It will be the third in a series by the IPCC, updating science from 2007.

It says the world is doing too little to achieve a goal agreed in 2010 of limiting warming to below 2º Celsius (3.6º Fahrenheit) above pre-industrial times, seen as a threshold for dangerous floods, heat waves, droughts and rising sea levels.

To get on track, governments may have to turn ever more to technologies for “carbon dioxide removal” (CDR) from the air, ranging from capturing and burying emissions from coal-fired power plants to planting more forests that use carbon to grow.

And, if the world overshoots concentrations of greenhouse gases in the atmosphere consistent with the 2ºC goal, most scenarios for getting back on track “deploy CDR technologies to an extent that net global carbon dioxide emissions become negative” before 2100, it says.

Temperatures have already risen by 0.8ºC (1.4ºF) since the Industrial Revolution.

To limit warming, the report estimates the world would have to invest an extra US$147 billion a year in low-carbon energies, such as wind, solar or nuclear power from 2010 to 2029.

At the same time, investments in fossil fuel energy would have to be reduced by $30 billion annually. And several hundred billion dollars a year would have to go on energy efficiency in major sectors such as transport, buildings and industry.

By contrast, it said that global annual investments in the energy system are now about $1.2 trillion.

And it says there are huge opportunities for cleaning up, for instance by building cities that use less energy for a rising world population. “Most of the world’s urban areas have yet to be constructed,” it says.

Overall, the report estimates that the costs of combating global warming would reduce global consumption of goods and services by between 1 and 4 percent in 2030, 2-6 percent in 2050 and 2-12 percent in 2100, compared to no action.

The IPCC said in September that it is at least 95 percent probable that human activities, led by the burning of fossil fuels, are the dominant cause of global warming since the 1950s, up from 90 percent in a 2007 assessment.

The world has agreed to work out a global U.N. deal by the end of 2015, entering into force from 2020, to fight climate change. But progress has been sluggish.

“Global greenhouse gases have risen more rapidly between 2000 and 2010,” the draft says, with greater reliance on coal than in previous decades. China, the United States and the European Union are the top emitters.

The IPCC cautioned that the findings in the draft, dated December 17, were subject to change. “This is a work in progress which will be discussed and revised in April,” said Jonathan Lynn, spokesman for the IPCC in Geneva.

The report adds many details to earlier drafts. The IPCC’s credibility suffered in 2007 after one of its reports wrongly said that Himalayan glaciers could all melt by 2035, centuries earlier than experts reckon.

The draft says that only the most radical curbs outlined in an IPCC report in September would give a better than 66 percent chance of keeping temperature rises below 2C. The scenario corresponds to greenhouse gas concentrations of 430 to 480 parts per million in the atmosphere – up from about 400 now.