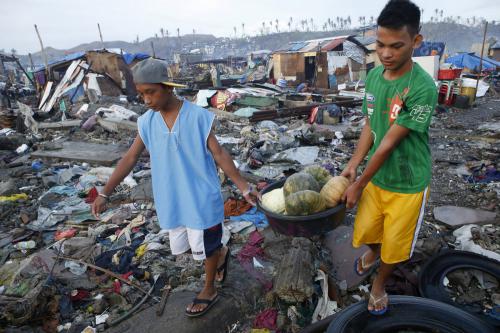 The World Bank said it offered $480 million on top of a $500 million emergency loan it committed earlier to the Philippines, with the additional funds to be used for the early rebuilding of communities and crucial infrastructure such as water, rural roads, schools and clinics.

The government has started compiling a typhoon reconstruction plan that needs support from Congress, the private sector and donors, a campaign that will likely shape the legacy of President Benigno Aquino, who is facing the region’s most daunting rebuilding task since the 2004 Asian tsunami.

On Saturday, the national disaster agency said the death toll from Haiyan had risen to 5,235 from 5,209, with more than 1,600 still missing and over 4 million displaced people.

Apart from the World Bank, the Asian Development Bank also pledged a $523 million loan and grant package to the Philippines, as foreign governments and international aid agencies committed about $344 million in cash and relief goods.

The government initially estimated the reconstruction cost to reach as much as $5.8 billion, with more than 1 million houses totally or partly destroyed and about 23 billion pesos ($524.3 million) worth of damage to agriculture and infrastructure.

Protests continued in Jakarta, where dozens of people burned Australian flags and images of Prime Minister Tony Abbott outside the heavily fortified Australian embassy in Jakarta. They demanded an apology over reports that Canberra had spied on President Susilo Bambang Yudhoyono and his wife.

Australian Agriculture Minister Barnaby Joyce said on Saturday he was postponing a planned trip to Indonesia next week due to the row.

PT Rajawali Nusantara Indonesia (RNI) is the first Indonesian firm to freeze business ties with Australia due to the spying uproar.

“We decided to halt talks on cattle ranches in Australia temporarily until the Australian government fulfils what the Indonesian government insists they do,” RNI Chief Executive Ismed Hasan Putro told Reuters.

“This is very important to build out mutual trust, respect and equality in the future.”

Australia’s Joyce said such a decision was for the company to make. “As minister for agriculture I support foreign investment when it is in the national interest. It is a matter for individual companies to make decisions about investment options as they arise,” he said in a statement.

Putro, who declined to name the Australian companies, said RNI had already started talks with a New Zealand firm as an alternative candidate.

In September, RNI said it had sent a team to Australia to explore the possibility of investing around 350 billion rupiah ($29.91 million) in three or four existing cattle ranches, with the aim of importing 120,000 live animals a year.

Indonesian officials said on Wednesday the country was reviewing trade ties with Australia, worth more than $11 billion last year, but that beef and cattle imports had not yet been hit.

Indonesia is a major importer of Australian agricultural products such as wheat and live cattle, while Australia is Indonesia’s 10th-biggest export market.

“Indonesia must take a firm stance with Australia as a country … but business must not be mixed with politics,” State-owned Enterprises Minister Dahlan Iskan told reporters.

Yudhoyono said on national television on Wednesday that he was freezing military and intelligence cooperation, including on the issue of asylum seekers, a perennial irritant in relations.

Indonesia had started the process of halting the exchange of intelligence information with Australia, Foreign Minister Marty Natalegawa said.

“It’s going to take as long as it needs to take, but the decision has been made,” Natalegawa told reporters. “One by one it will be shut down.”

Cooperation between the Indonesian and Australian police over asylum seekers has also “automatically and temporarily stopped”, said Agus Barnas, spokesman for the ministry that oversees the programme.

The reports that set off the Indonesian outrage quoted documents leaked by former U.S. National Security Agency contractor Edward Snowden, suggesting Australia had tried to monitor the phones of top Indonesian officials in 2009.

The Jakarta Post on Friday reported that a delegation of lawmakers plans to fly to Russia to meet Snowden for more details of the claims. A date for their visit has yet to be set.

Australia’s prime minister has not confirmed the spying or apologised, but he has expressed regret for the embarrassment the media reports caused to Yudhoyono and his family.

Further fuelling Indonesians’ anger was a derogatory comment on social media by a senior adviser to Abbott’s Liberal Party, which appeared to refer to Indonesia’s foreign minister.

Textor, who has also worked on the campaign of London mayor Boris Johnson, denied he was referring to anyone in particular but apologised for the comment.

Abbott called the comment “tacky” and mentioned the apology when asked about the government’s ties to Textor in parliament on Thursday.


Death toll jumps over 50 in Latvian supermarket collapse
Reuters / Phuket Gazette
PHUKET: Rescue workers pulled bodies from the ruins of a collapsed supermarket in the Latvian capital Riga on Friday as the death toll rose to 51 in the Baltic state’s worst disaster in decades.

Cranes lifted large slabs from the wreckage of the Maxima store, in a Riga suburb of grey, Soviet-era housing, to find those trapped when the roof collapsed late on Thursday. The supermarket was full of shoppers on their way home from work.

Rescue workers cleared away rubble from the store, which had occupied around 1,500 square metres (16,150 square feet), as ambulances and fire engines stood by.

Police said the death toll had reached 51 as of 2000 GMT, including three rescue workers. Thirty-eight more were injured. They said no survivors had been found in the past few hours.

“We’re still having moments of silence to listen for voices of people trapped, but unfortunately the only voices out there are of firefighters working,” state police spokesman Toms Sadovskis said.