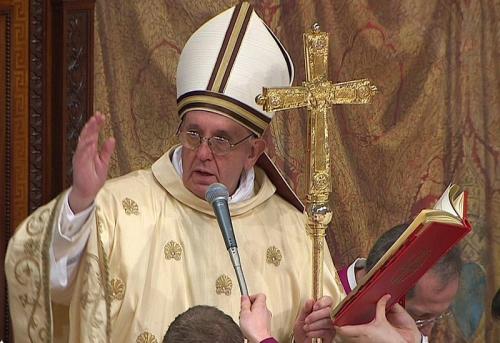 “They reveal anti-clerical left-wing elements that are used to attack the Church,” he added.

Critics of Jorge Bergoglio, the former Archbishop of Buenos Aires, allege he failed to protect priests who challenged the dictatorship earlier in his career, during the 1976-1983 “dirty war”, and that he has said too little about the complicity of the Church during military rule.

The allegations centre around a time before Bergoglio became a bishop, when he was leader of the Jesuits in Argentina. Two priests kidnapped by the military government alleged Bergoglio did not protect them.

“There has never been a concrete or credible accusation in his regard. Argentinian justice interrogated him once… but he was never charged with anything,” Lombardi said.

“He documented his denials of the accusations against him. There are also many declarations that show how Bergoglio tried to protect many people in his time during the military dictatorship. His role is very clearly noted.

“When he became bishop, he promoted the whole cause of reconciliation in the Church of Argentina,” the spokesman added.

Some human rights activists in Argentina have questioned the moral credentials of Francis since his election as pope on Wednesday, because of the allegations over the dirty war period.

The Argentinian Church’s reputation was tarnished by links between some high-ranking Roman Catholic clergymen and the military junta that kidnapped and killed up to 30,000 leftists. The wounds have yet to heal.