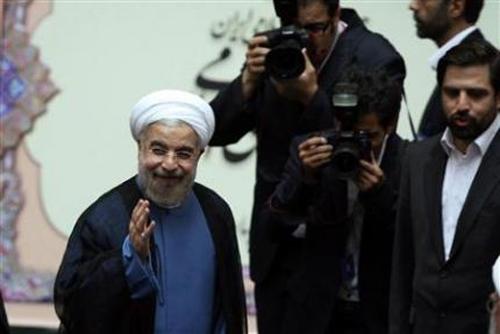 Rouhani, seen in the West as a relatively moderate leader, told his first news conference since taking oath on Sunday that he was “seriously determined” to resolve the dispute and was ready to enter “serious and substantive” negotiations.

Hopes for a diplomatic resolution to the nuclear issue have risen with Rouhani’s victory over conservative rivals in June, when voters chose him to replace hardliner Mahmoud Ahmadinejad with a cleric whose watchword is “moderation”.

Western countries and Israel have said in the past that they believed Iran was trying to achieve nuclear weapons capability, but Tehran says its programme is purely for peaceful needs.

Rouhani said Iran would not abandon its nuclear programme, which it would uphold “on the basis of international law”.

“We will not do away with the right of the nation,” the 64-year-old said.

“However, we are for negotiations and interaction. We are prepared, seriously and without wasting time, to enter negotiations which are serious and substantive with the other side.”

“If the other party is also prepared like we are, then I am confident that the concerns of both sides will be removed through negotiations within a period which will not be very long.”

His words were likely to reinforce a sense of cautious optimism in the West, despite the fact that negotiations over Iran’s nuclear programme have long frustrated both sides.

The last high-level talks between Iran and world powers – the United States, Russia, China, Britain, France and Germany – were held in April and failed to break the deadlock.

Since Rouhani’s victory at the polls, the United States has said it would be a “willing partner” if Iran was serious about finding a peaceful solution to the issue.

The former nuclear negotiator dodged a question on whether he would like to meet President Barack Obama during a visit to the United Nations in New York.

“If we see there is no covert secret agenda and there are good intentions, who will be meeting and who will be negotiating, these will be sideline issues,” Rouhani said with a wry smile.

Hoping to seize on Rouhani’s appointment, Russia on Tuesday said fresh talks between Iran and world powers must not be delayed and should take place by mid-September. Rouhani has yet to name his nuclear negotiator.

Russian Foreign Minister Sergei Lavrov, speaking during a visit to Italy, said Russia “absolutely agreed” with Rouhani, and criticized moves to tighten sanctions against Iran, saying it was a time for dialogue, not ultimatums.

“Now it is critical to support the constructive approach of the Iranian leadership,” he said in comments carried on Russian news agencies.

Russian leader Vladimir Putin is due to meet Rouhani for the first time as president in September.

In a letter to the new leader yesterday, the European Union said Rouhani had “a strong mandate to engage in dialogue” and added that it hoped for a new round of talks “as soon as practicable.”

PHUKET: Syrian Islamist rebels have killed around 200 people in a three-day offensive in the mountain stronghold of President Bashar al-Assad’s Alawite sect and driven hundreds of villagers to seek refuge on the Mediterranean coast, activists said on Tuesday.

Since launching the surprise assault at dawn on Sunday, the mainly Islamist rebel brigades led by two al Qaeda-linked groups have captured half a dozen villages on the northern edges of the Alawite mountain range, the activists say.

The rebel strike into Alawite territory and their capture of a military airport north of Aleppo mark two major gains for Assad’s foes after months of setbacks during which they lost ground around the capital Damascus and the central city of Homs.

Combined with a steady fightback in the southern province of Deraa, they highlight the challenge Assad faces in trying to restore his authority across Syria after two years of conflict that has killed 100,000 people and fragmented the country.

Assad controls much of southern and central Syria, while rebels hold northern areas near the Turkish border and along the Euphrates valley towards Iraq. The northeast corner is now an increasingly autonomous Kurdish region.

Rebels complain they are outgunned and lack foreign support, unlike the Iran- and Hezbollah-backed Syrian army. But they have support from regional Sunni powers and have equipped themselves with anti-tank weapons seized from the army.

Syrian state television said on Tuesday at least two Alawite villages seized by rebels since Sunday had been recaptured and named 10 “terrorists” – as the authorities call the rebel fighters in Syria – it said were killed in the fighting.

Overall, 60 rebels have been killed since the start of the operation, said Ammar Hassan, a local activist in Latakia. “Assad is sending huge reinforcement from Latakia, but liberation will continue,” he said.

Assad’s deployment of extra forces reflects the gravity of the challenge to his authority in a region that had remained firmly under his authority since the outbreak of Syria’s conflict, which started with peaceful protests in March 2011.

The conflict has turned into a civil war, deepening the Shi’ite-Sunni schism in Islam and raising tensions between Iran and the rest of the mainly Sunni Middle East.

Diplomats say the coastal area and its mountain villages could be the scene of an Alawite bloodbath if Islamist hardliners eventually gain the upper hand in the conflict.

“We killed 200 (of Assad’s men) on Sunday alone, and yesterday at least 40,” said a rebel fighter in the area.

“His people were kicked out to the city,” he said referring to the Mediterranean port of Latakia. “Only those who raised the white flag were exempt from killing.”

Ahmad Abdelqader, an activist with the Ahrar al-Jabal Brigade, one of the groups involved in the operation, put the death toll at 175, describing them as soldiers and militiamen who were manning roadblocks linking the mountain villages.

A prominent Alawite cleric, Muwaffaq Ghazal, was also seized by rebels from the al Qaeda-linked Nusra Front, who were seeking an exchange for captured fighters, activists said.

Mohammad Moussa, a Free Syrian Army commander, said rebel forces were on the outskirts of the hilltop village of Aramo, which is 20 km (12 miles) from Qardaha – Assad’s hometown and burial place of his father, Hafez al-Assad, who ru