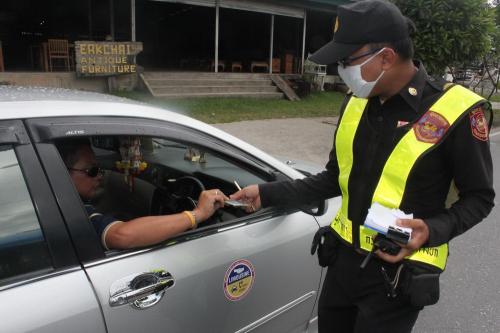 PHUKET: A taxi company using illegal “black taxis” to serve Phuket International Airport said it will continue to do so despite the Department of Special Investigation (DSI) opening its Organized Crime Center for Tourism there on Friday (story here).

“Our black plate taxis will still work as usual. If the DSI officers arrest them, I will explain to the officers why we are unable to get green license plates [become legal taxis],” Mook Andaman Business & Travel Co-operative secretary Ittipol Mekmanee told the Phuket Gazette.

Mook Andaman, not one of three co-operatives with Airport of Thailand (AoT) concessions to operate at the airport, has a fleet of 136 taxis, only 10 of which are legally registered, Mr Ittipol said.

The company has had limited success adding its vehicles to the legally operating co-operatives at the airport. Even that success came about only after stalking Phuket Governor Maitri Inthusut at his home (story here).

“I understand the rules and that officers want illegal operators to register their vehicles to make the system better. However, we have encountered difficulties,” said Mr Ittipol.

“Finance companies require deposits of around 70,000 baht [sic] in order to release a registration book, which they hold as collateral for loans taken out to buy cars. How can we find that much money?” he asked.

The drivers need the books in their hands in order to present them to the Phuket Land Transportation Office (PLTO) so officials can physically register the change from private vehicle to public.

Many banks and finance companies do not readily hand car registration books to people who have taken out loans to buy cars, as it is the only collateral the companies have to ensure the vehicles remain in their legal possession.

Mr Teerayut explained that at the time the biggest remaining obstacle stopping taxi drivers from becoming legal was the cost of changing the registered use of their vehicles with their finance companies.

However, a breakthrough deal was brokered six months ago.

“Drivers claimed banks and finance companies required deposits of up to 10,000 baht in order to release the registration books which they hold as collateral for loans taken out to buy cars,” Mr Teerayut said in February.

The result was a meeting with representatives from Thanachart Bank headquarters in Bangkok, which provides financing for about half of the 2,882 illegal taxis operating in Phuket.

“Thanachart Bank has agreed to waive the deposit for drivers who give permission for the bank to hand the registration book directly to the PLTO in order to change the registration type. This saves the taxi drivers from having to come up with the money needed for the deposit,” Mr Teerayut explained in February.

“Other financial services companies are taking care of their customers in the same way. This is a big help to the taxi drivers who want to get green license plates [have their vehicles registered as legal taxis],” he added.

Despite this progress made months ago, Mr Ittipol yesterday made it clear that financial companies were still what was preventing him, and the drivers of the Mook Andaman fleet, from becoming legal.

“As I said, what are we going to do? We do not have the money to pay the financial companies. If the government wants to make this rule more effective, they should provide more help to us. For example, they could allocate some funds for us to pay off our debts,” he said.

“Then, things would be much easier,” he added.

Though Mook Andaman is struggling with legality, Vice Governor Chamroen Tipayapongtada has maintained that many other taxi operators had been very cooperative since the announcement of the new rules (story here).

Mr Ittipol’s disregard for the DSI crackdown flies in the face of Vice Governor Chamroen, who urged all illegal taxis to have their vehicles registered, warning them that they will be prime targets for the DSI come Friday.

“On Friday, the Organized Crime Center for Tourism will start to operate at the airport. DSI officers and airport officers will be keeping an eye open for any black plate taxis operating at the airport,” Vice Governor Chamroen said.

“Any taxi operator who hasn’t registered their vehicle yet, better be quick. Because if they aren’t – we will arrest them,” he warned.