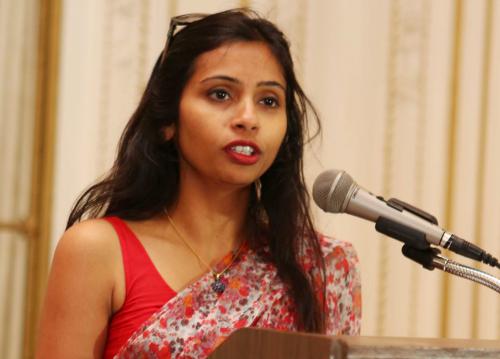 
U.S. to withdraw diplomat from India as dispute festers
Reuters / Phuket Gazette
PHUKET: The United States said on Friday it would withdraw one of its diplomats from New Delhi at India’s request after Washington effectively expelled an Indian envoy at the centre of a dispute between the allies.

Devyani Khobragade, 39, who was India’s deputy consul-general in New York, was arrested in December on charges of visa fraud and lying to U.S. authorities about what she paid her housekeeper. Khobragade’s arrest and strip-search provoked protests in India and dealt a serious blow to U.S. efforts to strengthen bilateral ties.

An indictment announced by U.S. prosecutors on Thursday accused Khobragade of making her Indian housekeeper and nanny, Sangeeta Richard, work 100-hour, seven-day weeks for a salary of little more than $1 an hour and refusing her sick days and holidays. The legal minimum U.S. wage is $7.25 an hour.

Khobragade, who has denied the charges, arrived in New Delhi on Friday night and was met by her father, Uttam Khobragade. “I want to thank my nation for the support they have given me,” she told Reuters Television.

Shortly after Khobragade’s return home, the U.S. State Department said it would recall a U.S. diplomat, whom it did not identify, at India’s request.

“This has clearly been a challenging time in the U.S.-India relationship,” department spokeswoman Jen Psaki said in Washington. “We expect and hope that this will now come to closure and the Indians will take significant steps with us to improve our relationship and return it to a more constructive place.”

The continued presence in the United States of the housekeeper could pose a challenge to Washington as it seeks to repair its relationship with New Delhi, an important U.S. ally in Asia.

India has asked U.S. authorities to arrest Richard over the Indian government’s allegations that she stole cash, a mobile phone and documents from Khobragade. Richard has denied the charges.

The United States has so far rebuffed those requests and further enraged India by spiriting Richard’s family out of India for safety reasons.

The monthlong dispute set off reprisals against American diplomats in New Delhi and led to the postponement of visits to India by U.S. officials and another by a U.S. business delegation.

India removed some security barriers near the U.S. Embassy and reduced the number of embassy staff with diplomatic immunity. On Wednesday, it ordered the embassy to close a club frequented by American expatriates and other foreign residents.

The deal allowing Khobragade to return to India had been expected to help mend the rift, but there was no sign, in the short term at least, that India was ready to forgive and forget.

“We called the U.S. mission to withdraw an officer of similar rank of Devyani as reciprocal action,” an Indian official said.

The official told reporters the government believed the U.S. diplomat had a role in the Khobragade case but gave no more details.

Analysts say it will take time to dispel the bad feelings built up between New Delhi and Washington, and some fear lasting damage has been done to a relationship Washington hoped would serve as both as a counterbalance to a rising China and as an engine to boost the U.S. economy.

With national elections due in India by May, political parties there have seized on the case and labelled it an attack on national sovereignty.

Political analyst Persis Khambatta of the Center for Strategic and International Studies in Washington said that now Khobragade had returned to India “tensions may begin to ease between the U.S. and India, but I fear that this episode has caused significant damage.”

During the crisis, both New Delhi and Washington repeatedly stressed the importance of their strategic partnership, which includes $100 billion of annual trade.

“The U.S.-India relationship is strategic to both countries, and is simply too important to allow it to be degraded or side-tracked,” he said.

Although Khobragade was indicted by a federal grand jury in New York on Thursday, she had already been transferred to India’s U.N. mission, a move that accorded her diplomatic immunity. India denied a U.S. request for that immunity to be waived and she was asked to leave the country.

Many Indians felt the case was an example of U.S. arrogance and taking its friendship with India for granted and they supported the government’s tough stand.

“India’s perception that it is not treated on par with other strategic partners, and the U.S. frustration with a relationship that is too long on ‘potential’ have come to the fore over a seemingly small, but not unimportant incident,” Khambatta said.

Middle-class Indians sympathized more with Khobragade than with her housekeeper. Indian political circles are calling Khobragade a hero, with one party in her home state of Maharashtra saying it would talk to her about running for parliament.