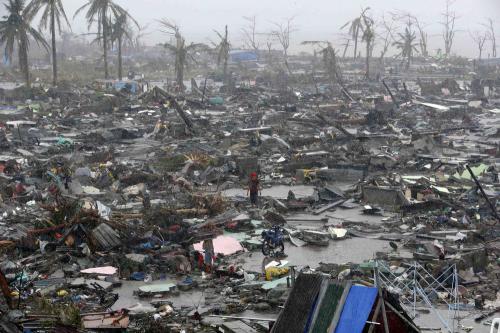 
Philippines typhoon kills estimated 10,000, destruction hampers rescue efforts
Reuters / Phuket Gazette
PHUKET: Rescue workers struggled to reach ravaged towns and villages in the central Philippines on Monday as they tried to deliver aid to survivors of a powerful typhoon that killed an estimated 10,000 people and displaced more than 600,000.

The United Nations said some survivors had no food, water or medicine. Relief operations were hampered because roads, airports and bridges had been destroyed or were covered in wreckage, it said.

President Benigno Aquino, facing one of the biggest challenges of his three-year rule, deployed soldiers to the devastated city of Tacloban to quell looting and said he might impose martial law or a state of emergency to ensure security.

Super typhoon Haiyan destroyed about 70 to 80 percent of structures in its path as it tore through Leyte province on Friday, said police chief superintendent Elmer Soria. After weakening, the storm headed west towards Vietnam.

Huge waves from one of the strongest storms ever recorded swept away coastal villages. Some officials likened the destruction to the 2004 Indian Ocean tsunami.

“From a helicopter, you can see the extent of devastation. From the shore and moving a kilometre inland, there are no structures standing. It was like a tsunami,” said Interior Secretary Manuel Roxas, who was in Tacloban, Leyte’s capital, before the typhoon struck.

“I don’t know how to describe what I saw. It’s horrific.”

The Philippines government and disaster agency have not confirmed the latest estimate of the number of deaths from the storm, whose sustained winds reached 195 miles per hour (313 km per hour) with gusts of up to 235 mph (378 kph).

Soria, quoting local officials, said the estimated death toll so far was 10,000. That could climb once rescuers reach remote villages along the coast.

Nearly 620,000 people were displaced and 9.5 million “affected” across nine regions, the U.N.’s Office for the Coordination of Humanitarian Affairs (OCHA) said in a statement. Local officials observed one mass grave of between 300 to 500 bodies in one area of Tacloban alone, it added.

About 300 people died in neighbouring Samar province, said an official of the provincial disaster agency.

Across Tacloban, men, women and children walked carefully over splintered remains of wooden houses, searching for missing loved ones and belongings. Not one building seems to have escaped damage in the coastal city of 220,000 people, about 580 km (360 miles) southeast of Manila.

Witnesses and officials described chaotic scenes. The city and nearby villages were flooded, leaving floating bodies and roads choked with debris from fallen trees, tangled power lines and flattened homes.

Survivors queued in lines, waiting for handouts of rice and water. Some sat and stared, covering their faces with rags to keep out the smell of the dead from one of the worst disasters to hit the typhoon-prone Southeast Asian nation.

One woman, eight months pregnant, described through tears how her 11 family members had vanished, including two daughters. “I can’t think right now,” she said. “I am overwhelmed.”

About 90 U.S. Marines and sailors headed to the Philippines in a first wave of promised military assistance for relief efforts, U.S. officials said. President Barack Obama said the United States was ready to provide additional aid.

U.S. aid groups also launched a multimillion-dollar relief campaign. One group, World Vision, said a shipment of blankets and plastic tarpaulins would arrive from Germany on Monday as a first step in its plan to help 400,000 people.

An official of World Vision based in Cebu Province said there were early reports that as much as 90 percent of northern Cebu had been destroyed.

An aid team from Oxfam reported “utter destruction” in the northern-most tip of Cebu, the charity said.

The United Nations children’s agency, UNICEF, said it was rushing emergency supplies to the Philippines.

“Reaching the worst affected areas is very difficult, with limited access due to the damage caused by the typhoon to infrastructure and communications,” UNICEF Philippines Representative Tomoo Hozumi said in a statement.

Most of the storm deaths appeared to have been caused by surging sea water strewn with debris that many said resembled a tsunami. Tacloban lies in a cove where the seawater narrows, making it susceptible to storm surges.

Aquino said the government had deployed 300 soldiers and police to restore order in Tacloban.

“Tonight, a column of armoured vehicles will be arriving in Tacloban to show the government’s resolve and to stop this looting,” Aquino said on Sunday.

Aquino has shown exasperation at conflicting reports on damage and deaths. One TV network quoted him as telling the head of the disaster agency that he was running out of patience.

“How can you beat that typhoon?” said defence chief Voltaire Gazmin, when asked whether the government had been ill-prepared.

“It’s the strongest on Earth. We’ve done everything we can, we had lots of preparation. It’s a lesson for us.”

The destruction extended well beyond Tacloban.

Officials had yet to make contact with Guiuan, a town of 40,000 people that was first hit. Baco, a city of 35,000 in Oriental Mindoro province, was 80 percent under water, the U.N. said.

There were reports of damage across much of the Visayas, a region of eight major islands, including Leyte, Cebu and Samar.

Many tourists were stranded. “Seawater reached the second floor of the hotel,” said Nancy Chang, who was on a business trip from China in Tacloban City and walked three hours through mud and debris for a military-led evacuation at the airport.

Six people were killed and dozens wounded during heavy winds and storms in central Vietnam as Haiyan approached the coast, state media reported, even though it had weakened substantially since hitting the Philippines.

Vietnam authorities have moved 883,000 people in 11 central provinces to safe zones, according to the government’s website.

The statement, translated from Arabic, outlined conditions that must be met before the talks, which aim to end Syria’s two-and-a-half year civil war, by creating a transitional governing body.

There must be a guarantee that relief agencies would be allowed access to besieged areas, the release of political prisoners and any political conference should result in a political transit