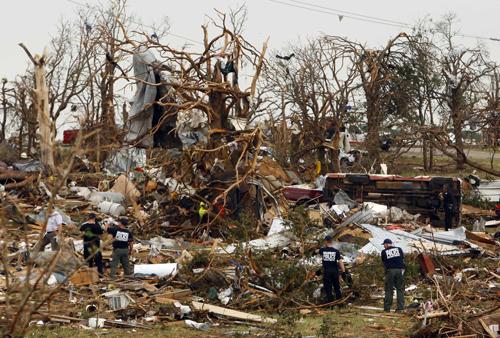 
Monster Texas tornado kills six, seven people missing
Reuters/ Phuket Gazette
PHUKET: Six people were dead and seven missing after a powerful tornado ripped through a neighbourhood that included housing for the poor in the north Texas town of Granbury, marking the deadliest severe storm outbreak in the United States so far this year.

Authorities were assessing damage and searching through rubble yesterday afternoon, hoping to find survivors among the twisted metal and splintered wood of flattened homes.

The tornado, which brought winds of 166-200 miles per hour, was rated an EF4 by the National Weather Service (NWS), the second-most powerful level for such a storm, said NWS meteorologist Mark Wiley.

EF4 tornadoes are rare and can blow away a well constructed wood or brick home, according to weather service ratings.

Officials counted six dead in Hood County, where Granbury is located, said county spokesman, Tye Bell. Another seven were missing and at least 45 people were injured, with most of the victims coming from the Rancho Brazos subdivision of approximately 110 mostly single-family homes.

PHUKET: A small passenger plane crashed in a river in northwestern Nepal early yesterday morning, but all 21 people on board miraculously survived the accident, officials said. Nine of the survivors were said to be injured, some of them seriously.

The Nepal Airlines plane, a Twin-Otter aircraft, had taken off from Nepal’s second largest city of Pokhara. It was carrying a total of 21 people on board, including three crew members, and was heading for the airport in Jomsom, a town in the Mustang District of the country’s Dhawalagiri Zone.

The accident happened when the aircraft was attempting to land but skidded off the runway, causing it to crash into the banks of the Kaligandaki River.

A local official said five people were in a critical condition, including the pilot who was identified as Captain D Pradhan.

Aviation accidents occur regularly in Nepal. All nineteen people on board a twin-engine Dornier aircraft, operated by Sita Air, were killed in September 2012 when the plane crashed shortly after taking off in Kathmandu, the Nepali capital. Among those killed were seven British nationals, five Chinese nationals and seven local citizens.
Belize gov’t calls for investigation into destruction of Mayan pyramid
Reuters/ Phuket Gazette
PHUKET: The government of Belize has ordered a thorough investigation into the destruction of an ancient Mayan pyramid that was over 2,000 years old.

The Noh Mul pyramid, located in the San Jose/San Pablo Village in the Orange Walk District of Northern Belize, was bulldozed and turned into rubble by DeMar’s Stone Company, a construction company owned by Denny Grijalva.

Belize’s Ministry of Tourism & Culture called for the prosecution of those responsible for the destruction of the ancient site, describing the incident as ‘ignorant and unforgivable.’

In a statement, the ministry expressed “outrage on the destruction of the Noh Mul Mayan Archaeological Site. This total disregard for Belize’s cultural heritage and national patrimony is callous, ignorant and unforgivable. This expressed disdain for our laws and policies is incomprehensible.”

However, the Belize Tourism Industry Association claimed that local government officials such as the Ministry of Works have been complicit in a number of ancient sites in the area in order to produce road fill.

Belize’s deputy prime minister, Gaspar Vega, meanwhile, ’emphatically’ repudiated the allegations of being involved in any way of the destruction of the Noh Mul. Vega also called for a full investigation of the incident.