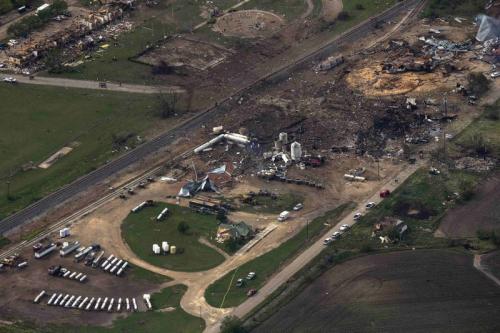 The death toll in West, Texas ranged from five to 15 people and was likely to change as rescuers went from house to house along the burned-out streets after the West Fertilizer Co. blew up on Wednesday night, said Sgt. William Patrick Swanton of the police department in nearby Waco.

The cause of the fire and explosion, which occurred just before 8 p.m. and injured more than 160 people, was not known. Officials said no evidence of foul play had been found.

The U.S. Chemical Safety Board, a federal agency charged with investigating industrial chemical accidents, was on the scene, as was the Bureau of Alcohol, Tobacco, Firearms and Explosives.

Fire-fighters had been battling a fire at the plant on Wednesday night for about 20 minutes before the blast rocked the town of 2,700 people about 20 miles (32 km) north of Waco.

“They were actively fighting the fire at the time the explosion occurred,” he said at a news conference held in a cattle auction house, where cows lowed behind him.

Swanton said the plant was storing huge tanks of anhydrous ammonia. Anhydrous ammonia is used by farmers as fertilizer to boost nitrogen levels in soil and increase crop production.

According to the Centres for Disease Control, anhydrous ammonia and water produces a poisonous cloud. When ammonia mixes with air, it forms an explosive mixture, and containers may explode when heated, according to the CDC.

The West plant is one of thousands of sites across rural America that store and sell hazardous materials such as chemicals and fertilizer for agricultural use, many within close range of residences and schools. Privately owned by 83-year-old Donald Adair, the company has fewer than 10 employees.

The plant had not been inspected by state officials since 2006, when a complaint of an ammonia smell was resolved, said Zak Covar, executive director of the Texas Commission on Environmental Quality.

State inspections are done only when there is a complaint, Covar said.

The federal Environmental Protection Agency fined the firm $2,300 (1,505 pounds) in 2006 for failing to implement a risk management plan.

The plant’s owner could not be reached for comment.

The Fire-fighters had been evacuating several blocks around the fire before the blast out of concern for dangerous fumes, Swanton said. That threat had abated by Thursday, he said.

In West, the middle school, which was badly damaged, was one fifth of a mile from the plant and the high school was one-third of a mile away.

The blast destroyed 60 to 80 houses, reduced a 50-unit apartment complex to what one local official called “a skeleton standing up” and left a horrific landscape of burned-out buildings and blackened rubble.

“Last night was truly a nightmare scenario,” said Texas Governor Rick Perry. “This tragedy has most likely hit every family.”

Texas is no stranger to industrial disasters. In 1947, 3,200 tons of ammonium nitrate fertilizer detonated aboard a ship in a Texas City port, killing almost 600 people. It is believed to be the deadliest industrial accident in U.S. history.

More recently, a 2005 explosion at a BP refinery in Texas City killed 15 people and injured more than 170 others when hydrocarbon vapours exploded in a processing plant.

The operation in West remained a search and rescue mission, Swanton said.

“They have not gotten to the point of no return where they don’t think that there’s anybody still alive,” he said.

He said rain and cooler temperatures were a concern. At early afternoon, the temperature was just 50 degrees Fahrenheit, or 10 degrees Centigrade. The average temperature for the area in April is closer to 67 degrees F.

“With the temperature getting a little cooler, with the weather raining here – pretty significant rains came through – we certainly want to find folks,” he said.

Bodies had been taken to a nearby ball field and then a community centre, he said.

Officials said they had moved 133 people out of a nearby nursing home.

If it was an industrial accident, investigators would look at whether Fire-fighters ignited the blast by pouring water on a volatile substance. Nim Kidd, chief of the Texas Division of Emergency Management, said it was too early to speculate.

“A lot of Fire-fighters will use their No. 1 tool, which is water, in a hazardous materials chemical situation to cool the surrounding environment,” he told a briefing in Austin.

Obama, who flew to Boston for a memorial service for victims of the Boston Marathon bombing, offered support and prayers to the victims in Texas.

Three hospitals in Waco and Dallas reported treating more than 160 injuries from the blast.

Ground motion from the blast registered as a magnitude 2.1 seismic tremor and created a jolt felt 80 miles (130 km) away in Dallas, the U.S. Geological Survey reported.

The bombings that killed three people and wounded 176 began a week of security scares that rattled the United States and evoked memories of the September 11, 2001 hijacked plane attacks.

“Today we are enlisting the public’s help to identify the two suspects,” Richard DesLauriers, the U.S. Federal Bureau of Investigation’s special agent in charge in Boston, told a news conference.

Both men carried backpacks that were believed to contain the bombs. The man identified as suspect No. 1 wore a dark baseball cap. Suspect No. 2 wore a white cap backwards and was seen setting down his backpack on the ground, DesLauriers said.

“Somebody out there knows these individuals as friends, neighbours, co-workers or family members of the suspects. Though it may be difficult, the nation is counting on those with information to come forward and provide it to us,” he said while cautioning that they were considered armed and dangerous.

Investigators hoped the men would be identifiable within hours of the release of the pictures and video, a national security official said, speaking on condition of anonymity.

Investigators were looking at the men for some period of time before deciding to make the videos public, and they had extensive video and still pictures to justify the FBI decision to label the two men as suspects, the official said.

At least one other person of interest who featured in crime scene pictures had been ruled out as a suspect. Also ruled out earlier in the week was a Saudi student who was injured in the attacks, the official said.