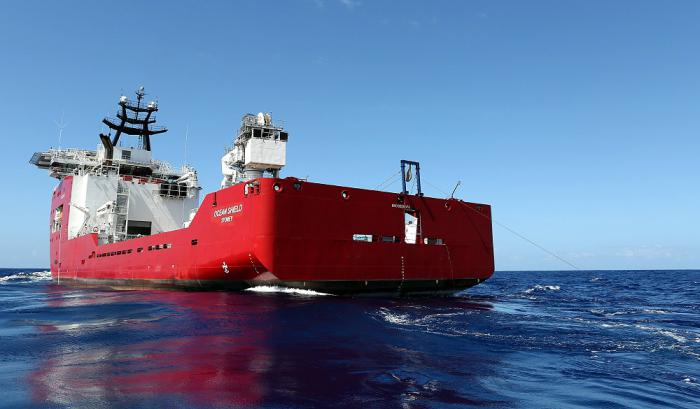 PHUKET: A robotic search vehicle is likely to be sent deep into the Indian Ocean on Tuesday to look for wreckage of a missing Malaysian jetliner on the sea floor, as officials say the chance of finding anything on the surface has dwindled.

Angus Houston, head of the Australian agency coordinating the search for Malaysia Airlines Flight MH370, said the month-long hunt was at a critical stage given the black box recorder batteries were dying – or had died.

An Australian ship that picked up signals consistent with the beacons from aircraft black box recorders over the weekend had not registered any further pulses, Houston said.

“It’s all very finely balanced and I think it’s absolutely imperative to find something else.”

Houston said the chance of finding anything on the surface was greatly diminished due to strong currents and a cyclone that had passed through the area in the past week.

The black boxes record cockpit data and may provide answers about what happened to the plane, which was carrying 227 passengers and 12 crew when it vanished on March 8 and flew thousands of kilometres off its Kuala Lumpur-to-Beijing route.

Authorities have not ruled out mechanical problems as a cause of the plane’s disappearance but say evidence, including loss of communications, suggests it was deliberately diverted.

A U.S. Navy “towed pinger locator”, which has been trawling an area some 1,680 km (1,040 miles) northwest of Perth, picked up two “ping” signal detections over the weekend – the first for more than two hours and the second for about 13 minutes.

Houston said the Australian ship Ocean Shield was still pulling the pinger locator in an effort to regain contact but would likely move quickly to remove that equipment and instead send down an autonomous underwater vehicle (AUV) named Bluefin-21.

The Bluefin will scour the ocean floor in 20-hour missions using sonar in an attempt to find the Boeing 777, before its findings are downloaded and analysed on board the Ocean Shield.

If anything unusual is spotted, the sonar on board the robotic vehicle will be replaced with a camera to take a closer look. The potential search area was 4.5 km (2.8 miles) deep, the same as the Bluefin range.

Malaysia’s acting transport minister, Hishammuddin Hussein, told reporters in Kuala Lumpur he was “cautiously hopeful” that the signals picked up would lead to a positive finding soon.

Houston said he was confident the search teams were looking in the right area, based on analysis of sporadic radar and satellite data.

“We are pretty confident that we are in the right area because the calculations of the search area are right where we are picking up these transmissions,” Houston said, adding that a decision to deploy the Bluefin would be made later on Tuesday.

“We’ve probably got to about that stage now,” he said.

It could be several days before the Bluefin had anything to report.

“Nothing happens fast when you’re working at depths of 4,500 metres,” Houston said. “It’s a long, painstaking process, particularly when you start searching the ocean floor.”

Up to eleven military planes, three civilian planes and 14 ships will take part in the search on Tuesday, with the Australian coordination centre reporting good weather in the search area.

A second search area was being maintained in waters where a Chinese vessel had also picked up “ping” signals at the weekend in an area more than 300 nautical miles from the latest signals.

Chinese patrol ship the Haixun 01 reported receiving a pulse signal with a frequency of 37.5 kHz, consistent with the signal emitted by flight recorders, on Friday and again on Saturday.

Houston said the Chinese and Australian discoveries of pings were consistent with work done on analysing radar and satellite data but the Ocean Shield’s leads were now the most promising.