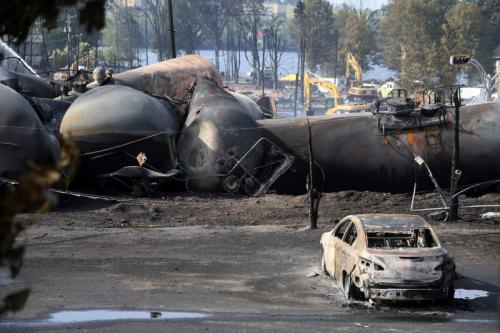 
Quebec train set too few brakes, with deadly result
Reuters / Phuket Gazette
PHUKET: The handbrake is the railroad industry’s ultimate fail-safe mechanism. It is supposed to help avert disasters like the one that engulfed a Canadian town on Saturday, when a runaway train loaded with oil hurtled downhill, derailed and exploded, leaving 50 people dead or missing.

The railroad initially blamed the catastrophe on the failure of the train’s pneumatic airbrakes after an engine fire, but the company acknowledged on Wednesday that the train’s engineer did not apply an adequate number of handbrakes to hold the train in place, and failed to comply with regulations.

A Reuters review of Canadian and U.S. regulations found that rail operators are given considerable leeway to decide how many handbrakes are sufficient for any given train, depending on track conditions and the weight of the cargo.

Operators are only required to apply enough of the handbrakes – one is found on every railcar – to ensure the train will not move even if other safety features, such as air brakes, falter.

The issue of handbrakes is likely to prove central to how blame is apportioned for the deadliest North American railroad disaster in at least two decades, experts said. The Canadian authorities have launched a criminal investigation, and Quebec police inspector Michel Forget has said criminal negligence is one lead they are looking into.

The question of whether enough of the train’s handbrakes were used may affect the liability of the rail company – Montreal, Maine & Atlantic Railway (MMA) – and could spur an overhaul in regulation. One key question is if fault can be linked to MMA’s own handbrake practice, or to the lone engineer who operated the train, or to a regulatory code that gives rail operators too much slack, experts said.

MMA Chairman Ed Burkhardt told Reuters the engineer failed to comply with Canadian regulations. “If it had been complied with, we wouldn’t have had a runaway train,” he said.

Burkhardt said he could not be certain how many handbrakes were set but the engineer told him that 11 had been applied before he left the train on Friday night for a sleep break.

At least three independent railroad industry experts contacted by Reuters said they would have opted to apply at least 20 brakes and as many as 30 on a similar heavy train parked at a grade of 1.2 percent, which is the slope of the track where the runaway train had been parked.

By 1 a.m. on Saturday, the unmanned train was speeding toward Lac-Megantic, Quebec, around 7 miles (11 km) downhill from its parking spot in the municipality of Nantes.

The company and investigators have not released the engineer’s identity. A source familiar with the situation and Canadian media said his name is Tom Harding.

Reuters has not been able to reach Harding for comment. A phone number listed for him in Farnham, Quebec, was disconnected and a Reuters reporter who visited his address found no one home.

Burkhardt told reporters on Wednesday afternoon that the engineer was “under police control” but “not in jail.” Later in the day, police said the engineer is not under arrest and declined to further explain his status or name him.

The handbrake mechanism on a railcar usually consists of a large wheel in the cabin, connected to chains and levers that set brake pads underneath the train.

Canadian regulations require an engineer to test the train’s handbrakes after setting them. The engineer is required to attempt to pull the train back and forth, typically using the engine, to ensure the brakes can hold it in place.

Burkhardt, a decades-long rail industry veteran, said he did not know if the engineer performed the test.

Asked whether a potential failure to set or test enough handbrakes could increase MMA’s liability for the wreck, Burkhardt said, “We’re acknowledging liability. We’re not standing around saying we don’t have responsibility.”

He said the company had insurance but declined to give details.

To be sure, unforeseen circumstances left MMA’s train at the mercy of its handbrakes. The train’s pneumatic brakes, which run on compressed air and are the first line of defence, had been shut down by firefighters when they switched off an engine that had caught fire after the engineer left.

It is not yet clear what caused the fire, but the shutting down of the engine prompted the pneumatic braking system to gradually leak air and lose its track-gripping power.

The MMA train was carrying a cargo of light, sweet oil from North Dakota’s Bakken region, which ships out three-quarters of its crude by rail, to an Irving Oil refinery in New Brunswick.

“I definitely think there should be a protocol … that addresses where and how you’re going to park a train that’s loaded with hazardous material,” said John Bentley, an accident reconstruction expert in Perryville, Arkansas.

At present, Canadian and U.S. regulations do not specify the number of handbrakes since factors like track grade, cargo weight and contents, weather and space between railcars can all have a bearing on how many brakes are needed to ensure safety.

Depending on where a train is parked, more or fewer handbrakes may be required, Canadian Transportation Safety Board investigator Ed Belkaloul said, adding that railroad companies are given some discretion to develop their own safety standard.

How many hand brakes are enough?

Earlier this week, Burkhardt told Reuters he believed the MMA engineer had complied with company rules and standard rail industry practices in securing the train. On Wednesday, he told reporters the worker likely failed to set enough handbrakes, violated company policy, and was now suspended without pay. He did not detail what caused his revised views.

An online copy of Canadian Pacific’s General Operating Instructions said at least nine handbrakes must be set on a parked train of 70 to 79 cars, but additional brakes “may be required” if the train is parked on a grade.

Rival railroad Canadian National provides more specific instructions, recommending that crews activate the handbrakes on 40 percent of all railcars when a train is idled on a 1-1.4 percent grade, according to a Transportation Safety Board report in April.

If MMA’s engineer had followed the 40 percent guidance, he would have had to activate about 29 brakes.

The Transportation Safety Board report followed a January 2012 incident in which a section of 13 loaded coal cars crashed into a stationary train near Hanlon, Alberta, at 56 miles per hour (90 km per hour), seriously injuring one crew member. Canadian National was faulted for providing inadequate guidance to its crews for how to test the braking systems, particularly on slopes.

“There’s always some amount of judgment. It’s a balancing act between what will hold the train and what is operationally feasible,” said Rob Mangels, senior mechanical associate at R.L. Banks & Associates and a locomotive engineer and trainer.