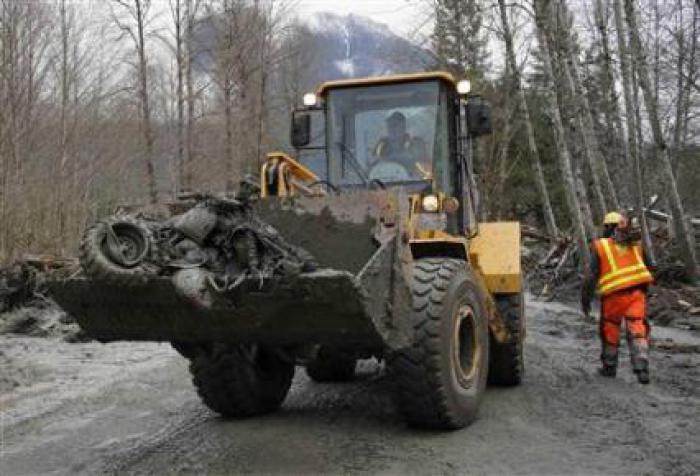 PHUKET: The number of people missing after a landslide sent a wall of mud crashing into dozens of rural Washington state homes dropped to 90 on Wednesday, as officials reported finding more bodies while acknowledging that some victims’ remains may never be recovered.

The known death toll remained at 24, including eight people whose bodies had yet to be recovered after the disaster near the tiny town of Oso, where a rain-soaked hillside collapsed on Saturday and cascaded over a river and a road, engulfing homes on the opposite bank.

Officials said more bodies had been found in the debris field on Wednesday, but declined to say how many until the remains had been removed and sent to a medical examiner’s office.

Asked whether he expected the death toll to rise significantly, Governor Jay Inslee told CNN: “Yes, I don’t think anyone can reach any other conclusion.”

Snohomish County’s emergency management director, John Pennington, told reporters the tally of missing had dropped dramatically to 90 from 176, but the fate of as many as 35 more people not officially listed as missing remained uncertain.

Eight other people survived the slide but were injured, including a 22-week-old baby rescued with his mother and listed in critical condition although he was improving. The mother and three other survivors also remained hospitalized.

The slide already ranks as one of the worst in the United States. In 1969, 150 people were killed in landslides and floods in Virginia, according to the U.S. Geological Survey.

About 200 search personnel, many wearing rain gear and hard hats, painstakingly combed through the disaster zone under cloudy skies on Wednesday, taking advantage of a break from Tuesday’s rain showers to hasten their search for more victims.

White markers were placed at the edge of the gouged slope to help in detecting any further shifting of the hillside.

“There are finds going on continually. They are finding people now,” he told reporters visiting the search site. “People are under logs, mixed in. It’s a slow process.”

But Jan McClelland, a volunteer firefighter from Darrington who was among the first to arrive at the scene and has spent long days digging through the thick gray muck, conceded it was possible some bodies may end up forever entombed at the site.

“I’m fearful we won’t find everyone,” she said. “That’s the reality of it.”

County officials also started to address criticism for allowing new home construction in the area after a 2006 landslide in the same vicinity, which followed numerous reports detailing the risks of slides dating back to the 1950s.

A 1999 study by geologist Daniel Miller for the U.S. Army Corps of Engineers had warned of the potential for a “large catastrophic failure” in the area, about 55 miles northeast of Seattle.

The county’s emergency management director, John Pennington, told reporters that local authorities had spent millions of dollars on work to reduce landslide risks in the area after the 2006 event.

He suggested that while officials and residents were aware of vulnerability to unstable hill slopes, Saturday’s tragedy came out of the blue.