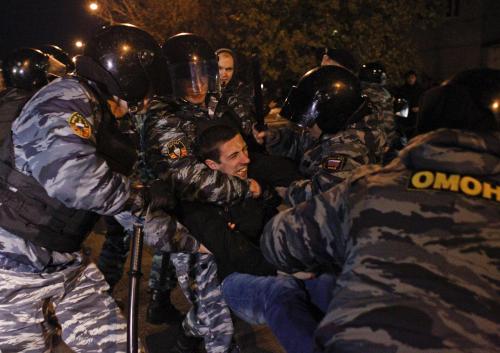 
Rioting erupts in Moscow after killing blamed on migrant
Reuters / Phuket Gazette
PHUKET: Demonstrators, some chanting racist slogans, vandalised a shopping centre and scuffled with police in a Moscow neighbourhood on Sunday after the killing of a young man that residents blamed on a migrant from the Caucasus.

Protests over the death in the southern Biryulyovo district began peacefully until a group of young men began smashing windows in the shopping centre.

The crowd grew to number several thousand and demonstrators scuffled with police when they tried to make arrests, a Reuters witness said. Pictures showed at least one policeman with minor injuries and video footage showed a car and rubbish bins overturned in the streets.

Later the crowd moved from the shopping centre and overran a vegetable warehouse where, according to residents, many migrants from the Caucasus and Central Asia are employed.

A video posted on Youtube showed several men chanting “White Power!” and “Russia forward!” as they were forcing their way into the shopping centre. Interfax news agency quoted Moscow police as saying around 200 people were detained.

The protesters began with demands for more action from law enforcement officials after an unidentified assailant fatally stabbed the 25-year-old man who was walking home with his girlfriend on Thursday night.

Russia’s top investigative agency said it was looking into the killing.

Persistent tension between ethnic Russians and migrants and others with roots in the Caucasus and central Asia has occasionally erupted into violence in Moscow and other cities.

President Vladimir Putin said earlier this month that Russia needed migrant labourers in industries such as construction but – in a nod to anti-migrant sentiment – suggested their numbers could be restricted in other sectors, including trade.

The 324-metre-high (1,062-foot) iron tower was evacuated around 3 p.m. (1300 GMT) and had not reopened to tourists by 5.30 p.m. The sector around it was fully cleared, the police official said. He could give no further details.

Built in 1889 and one of the world’s most recognisable monuments, the Eiffel Tower sees some 7 million visitors each year and up to 30,000 a day in the peak summer season.

It is regularly subject to bomb scares which are usually quickly found to be hoaxes and only cause full evacuations a couple of times a year.


At least 89 killed in stampede at Indian Hindu temple
Reuters / Phuket Gazette
PHUKET: A stampede at a bridge leading to a remote Hindu temple in central India on Sunday killed at least 89 people and injured more than 100, police said.

Nearly 150,000 devotees gathered to celebrate the holy festival of Dussehra at the Ratangarh temple, in a forest outside the town of Datia, 390 km (240 miles) north of the Madhya Pradesh state capital, Bhopal.

But pilgrims panicked when the railings broke on a bridge that led to the temple, triggering the stampede. Some devotees were crushed to death under the feet of fellow worshippers, others drowned after falling or jumping into the river Sindh.

“The death toll has shot up to 89 now and nearly 100 people are injured. Relief work tends to slow down after the sunset but will start in full swing from tomorrow morning,” Dilip Arya, a deputy inspector general of police, told Reuters.

Local media said the police used batons to control the crowd, prompting many people to panic. A team of 20 doctors was been sent to help, the media said.

Pilgrims have died due to stampedes on previous occasions.

In February this year, a stampede killed at least 36 Hindu pilgrims, who were part of the world’s largest religious festival which attracted some 30 million people.


Colombian peace talks stall, tension mounts
Reuters / Phuket Gazette
PHUKET: The Colombian government and left-wing FARC rebels ended a 15th round of peace negotiations on Sunday trading accusation over responsibility for the slow pace of the talks and for the first time failing to issue a joint statement on their progress.

Polls in Colombia show the population is tiring of the talks, which have dragged on for 11 months with only a partial accord on agrarian reform, the first point of a six-point agenda.

The parties currently are negotiating on the rebels’ future political participation and still have before them the issues of reparations to war victims, the narcotics trade, ceasing hostilities and implementing the agreement.

The Colombian government wants a peace accord by the November start of a national electoral cycle, a deadline both parties and observers now say will not be met and may complicate the talks. That process concludes with a presidential vote in May.

President Juan Manuel Santos, who is expected to run for a second term, has staked his legacy on bringing an end to the conflict, and both sides have now floated the idea of a pause in negotiations until the elections are over.

The government issued a statement on Saturday, for the first time a day before the round of negotiations ended, accusing rebel negotiators of deliberately stalling the deliberations by bringing up issues not on the agenda and using the talks for propaganda purposes.

“Since these conversations began it has been the government delegation that has insisted that these talks advance more quickly toward an agreement,” the statement, read by lead negotiator and former Colombian Vice President Humberto de la Calle, said.

The government views “with concern” the slow pace of negotiations and has “communicated this to the guerillas and public,” it said.

Colombia’s Revolutionary Armed Forces (FARC) accused the government on Sunday of not taking seriously 100 proposals it had offered on the second point of the agenda, which includes rights and guarantees for the exercise of political opposition after a peace is signed.

“It makes no sense to try to paint the insurgency as the side of the dialogue that is holding back the pace of the (peace) process,” the statement said, threatening to break an agreement not to make the details of negotiations public, calling the agreement “absurd.”

At issue for the rebels is a government initiative approved by the Colombian Constitutional Court in August that would allow for the prosecution of FARC leaders and a proposed referendum, currently before lawmakers, that would make any peace deal conditional on a popular vote set to occur during national elections next year.

“It’s not realistic to think we would allow … unilateralism over (such) crucial issues,” the statement said.

The FARC, the larger of two guerrilla groups, with some 8,000 troops, repeatedly has stated that an agreement cannot include prison time for any of its leaders.

The war, which has raged for 50 years and is the last majo