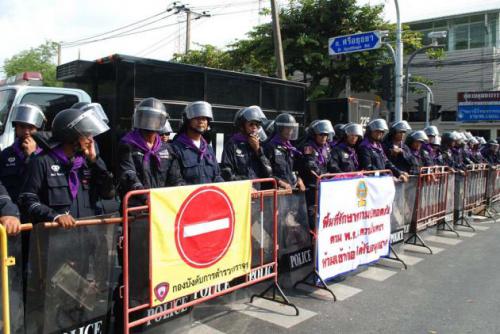 
Govt House sealed off after threat of protest
The Nation / Phuket Gazette
PHUKET: Police yesterday began closing 14 roads around Government House to traffic for fear that anti-government protesters may move their rally to the area.

The move came as an anti-government group threatened to hold a large rally and a nationwide strike.

Checkpoints were set up along perimeter roads and only people who could prove that they worked or lived in the area were allowed to pass, according to Metropolitan Police Bureau spokesman Maj-General Adul Narongsak.

“Vehicles and people are not allowed to enter the area, unless they get permission from authorities.

People who live and work in the area must show their ID cards as proof,” said Adul, who is also a Metropolitan Police Bureau deputy commissioner.

He said police intelligence showed that the anti-government protesters – now gathering at Lumpini Park and Urupong Intersection – were planning to move to Government House, which is off-limits to protesters under the Internal Security Act (ISA) invoked last week.

National Security Council secretary-general Paradorn Pattanatabut yesterday said the road closures were a precautionary measure and a move to send a signal to the protesters that they should not attempt to move on Government House.

He said that the Urupong Intersection, where the group of protesters were holding their street rally, was not far from Government House and that it would take the protesters only a short time to move their operations from there.

CAPO spokesman Pol Maj-General Piya Utayo yesterday said it was expected that the protesters would change their rally site a number of times and would not end their protest easily.

Thaikorn Pholsuwan, coordinator of the anti-government group known as the People’s Army to Overthrow the Thaksin Regime, said yesterday the group would announced a large rally today and a campaign for a nationwide strike. He said that the 40th anniversary of the 1973 student-led uprising today was the appropriate occasion for people to rise up and protest against the country’s problems.

He also said his group would resume protesting outside Government House and that it planned to mobilise more protesters, who would come from the provinces.

The Cabinet last Wednesday resolved to invoke the ISA in Bangkok’s Dusit, Phra Nakhon and Pom Prab (Sattru Phai) districts, with effect from last Wednesday to this Friday. The districts are of political significance as they are home to Government House, Parliament House, Democracy Monument and Sanam Luang.

The government’s move to invoke the ISA came just a day after the People’s Army began its rally outside Government House. Leaders of the group later agreed to end their rally there ahead of a visit by Chinese Prime Minister Li Keqiang last Friday. However, some of the protesters were unhappy with their leaders’ decision and began gathering at the Urupong Intersection, just outside the ISA area.


Flood victims get counselling
The Nation / Phuket Gazette
PHUKET: A flood in Nakhon Ratchasima yesterday claimed the life of a 64-year-old farmer who was worried about his paddy fields.

Somnuek Cherdkornburi’s body was found in strong currents in Khon Buri district. His death raised the flood toll to 43.

Police said the farmer left his house to check his ripening crop in submerged fields because he feared they would die. He may have slipped from an earthen dyke, fallen into the water and drowned.

Meanwhile, an overflow from the Lam Prapleung Reservoir has reached Chok Chai district, and left several hundred houses and paddy and cassava fields under water. An estimated 30,000 rai of cassava fields were damaged.

The base of the 900-year-old Pakoh Stupa in the same district was under about one metre of water. The flood washed over Highway 224 Ratchasima-Chokchai at the 29km-30km markers. Authorities put up a sign warning motorists to drive carefully because of the flood.

The ministry had dispatched mobile medical teams to several areas to give treatment and these had reached about 300,000 households over the past 26 days. About 90,000 people were treated, mostly for athlete’s foot, followed by colds and aches and pains.

The Disaster Prevention and Mitigation Department reported that 116 districts in 25 provinces remained under water with nearly a million people affected by the floods.

The situation has improved in 17 provinces, including in Chiang Mai, Mae Hong Son, Phayao, Lampang and Chumphon.


World’s best say quality teaching makes great schools, not tests
The Nation / Phuket Gazette
PHUKET: Over the past four decades, Finnish education has improved to an extent that it is recognised by teachers as the best in the world. Its approach is also noticeably different from global trends. As a result, there is a solid reason for educators everywhere to learn from what Finland has done.

Pasi Sahlberg, head of the Centre for International Mobility and Cooperation at Finland’s Ministry of Education and Culture, revealed many secrets behind his country’s educational successes at EDUCA 2013.

Organised by PICO (Thailand), this annual congress for teachers’ professional development has brought together the world’s leading educators. Keynote speakers have come from successful countries like Finland, and Hong Kong. More than 50,000 teachers registered for the event, which ran from October 9 to October 11.

“While others are preoccupied with setting the same standard for all schools, we believe that standardisation will block creativity,” Sahlberg said. “While others encouraged competition as a means to improve educational quality, we trust that collaboration will work better.”

He said his country encouraged shared responsibility based on trust, not on tests that have kept students, teachers and school executives under check in many countries, including Thailand.

In sum, when it comes to educational improvement, Finland goes for collaboration, customisation, trust-based responsibility and equity.

“Our goal is never about delivering the best educati