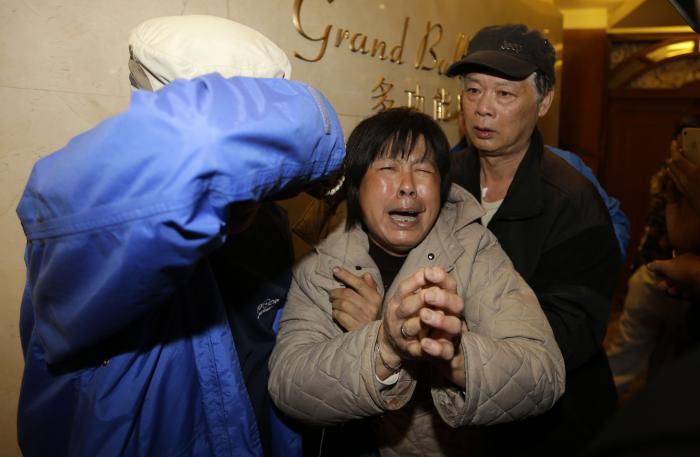 PHUKET: Bad weather and rough seas on Tuesday forced the suspension of the search for any wreckage of a missing Malaysian jetliner that officials are now sure crashed in the remote Indian Ocean with the loss of all 239 people on board.

Citing groundbreaking satellite-data analysis by British firm Inmarsat, Malaysian Prime Minister Najib Razak said on Monday that Malaysia Airlines Flight MH370, which vanished more than a fortnight ago while flying to Beijing from Kuala Lumpur, had crashed thousands of miles away in the southern Indian Ocean.

Recovery of wreckage could unlock clues about why the plane had diverted so far off course. Investigators suspect a possible suicide, but have not found any sign of a motive.

A massive international air and sea search in the area on Monday spotted several floating objects that might be parts of the plane and an Australian navy ship was close to finding possible debris, Australian Prime Minister Tony Abbott.

But the Australian Maritime Safety Authority (AMSA) said gale-force winds, heavy rain and low cloud meant planes could not fly safely to the zone on Tuesday, and heavy seas meant an Australian navy ship was leaving the area.

“This is a remote location, far from any possible landing sites,” Malaysia’s Najib said. “It is therefore, with deep sadness and regret, that I must inform you that, according to this new data, Flight MH370 ended in the southern Indian Ocean.”

Najib’s announcement opens the way for what will be one of the most costly and difficult air crash investigations ever. Normally, an official investigation can only begin once a crash site has been identified.

That would give Malaysia power to coordinate and sift evidence. Malaysia has faced heavy criticism over the progress of the search and its informal investigation, especially from China which had more than 150 citizens on board the plane.

Chinese Deputy Foreign Minister Xie Hangsheng immediately demanded Malaysia hand over all relevant satellite-data analysis showing how Malaysia had reached its conclusion about the fate of the jet.

The United States said it was sending an undersea Navy drone to Australia, in addition to a high-tech black box detector, to help search the cold, deep and stormy waters.

The so-called black boxes – the cockpit voice recorder and flight data recorder – record what happens during flight. Black boxes carry locator beacons but they fade out after 30 days.

Flight MH370 vanished from civilian radar screens less than an hour after taking off on March 8. No confirmed sighting of the plane has been made since.

Investigators believe someone on the flight may have shut off the plane’s communications systems. Partial military radar tracking showed it turning west and re-crossing the Malay Peninsula, apparently under the control of a skilled pilot.

That led them to focus on hijacking or sabotage, but investigators have not ruled out technical problems.

Some relatives of those on board first received the news that the search for survivors was over in a Malaysia Airlines SMS message which said: “We have to assume beyond all reasonable doubt that MH370 has been lost and none of those on board survived.”

There were hysterical scenes at the Beijing hotel where many of the relatives of those on board were staying.

Najib said Inmarsat had been performing further calculations on data gleaned from faint pings picked up by satellite that initially only narrowed the search area to two massive arcs.

The Inmarsat analysis had narrowed the search area “but it’s still a big area that they have to search”, said Stephen Wood, CEO of All Source Analysis, a satellite analytic firm.