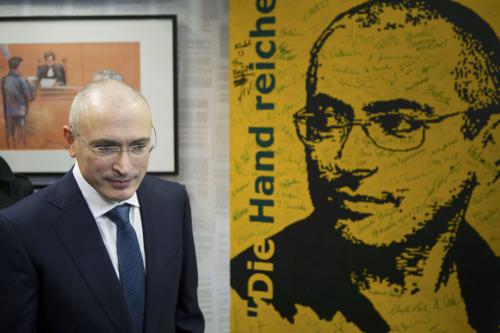 
Khodorkovsky challenges Putin over political prisoners
Reuters / Phuket Gazette
PHUKET: Former oil tycoon Mikhail Khodorkovsky on Sunday promised not to seek power in Russia but said he would fight for the freedom of people he considered political prisoners, challenging Vladimir Putin two days after a presidential pardon freed him from jail.

Khodorkovsky told reporters in Berlin that “the struggle for power is not for me”, but made clear he would put pressure on Putin and urged world leaders to do the same, saying his release should not be seen as a sign Russian repression is at an end.

“We need to work further so that there would be no more political prisoners left in Russia and other countries,” he told a news conference at a museum commemorating the Berlin Wall from the Cold War era. “I am going to do my utmost in this regard.”

Putin unexpectedly announced on Thursday that he would pardon Khodorkovsky, who had been in jail on fraud and tax evasion charges since he was arrested in 2003, during Putin’s first term, and was seen by many as a political prisoner.

He was released from a prison camp near the Arctic Circle on Friday and flew to Berlin, where he was reunited with relatives.

He said he would not advise leaders on how to deal with Russia’s “complex” president but added: “I just hope politicians from Western countries will keep in mind that I’m not the last political prisoner in Russia when they talk to Putin.”

Emotional at times but looking healthy and composed in a dark suit and blue necktie, Khodorkovsky, said that there were no conditions attached to his release and that he had made no admission of guilt in asking Putin for a pardon.

But he said that despite the Kremlin’s public assurances that he was free to return to Russia, he could not do so now because there was no guarantee he would be able to leave again if necessary.

No choice on leaving Russia

He said the decision to leave Russia immediately after his release had not been his.

“I had no choice. I was woken at 2 a.m. by the head of prison camp and he told me I was going home,” he said. “During the trip I learned that the trip ended in Berlin. I saw on the door of the airplane that it was a German airplane.”

The former Yukos oil company chief said his financial position was good and he had no plans to go back into business, but made clear he had not made big decisions about his future, saying repeatedly he had only been free for 36 hours.

Khodorkovsky, once Russia’s richest man and the head of the Yukos oil company, was convicted in two trials that Kremlin critics say were part of a Kremlin campaign to punish him for challenging Putin, to bring his oil assets under state control and warn other tycoons to toe the line.

Khodorkovsky had funded opposition parties, questioned state decisions on oil pipeline policy, raised corruption allegations and fashioned himself as an enlightened, Western-style post-Soviet executive – all of which ran counter to Putin’s efforts to tighten his grip on Russia in his first term.

Khodorkovsky said on Sunday he did not intend to seek to regain assets of Yukos, which was broken up and sold off after his arrest. Its main production asset ended up in the hands of state oil company Rosneft, now Russia’s biggest producer and headed by a close Putin ally, Igor Sechin.


Immigrants sew mouths shut in Italy to demand release
Reuters / Phuket Gazette
PHUKET: Nine illegal immigrants detained in Italy have stitched their lips together with thread from their bedsheets in a protest to demand their release.

The protest, which started at a centre near Rome on Saturday, came days after video emerged of immigrants at another camp standing naked in the cold to be sprayed for scabies. It drew new calls for the closure of detention centres and for changes to immigration laws.

Using a needle improvised from a cigarette lighter, four Tunisians each made a single stitch to join their lips in the middle, Filiberto Zaratti, a lawmaker who visited the protesters, told Reuters.

Five Moroccans later imitated the gesture, according to the centre’s manager, speaking on Italian television. The protesters asked to be let out of the centre, the manager said.

Italy has borne the brunt of a wave of immigration to the European Union, with more than 40,000 people risking the dangerous sea crossing from northern Africa this year – almost four times as many as last year.

Illegal immigrants can be held for up to 18 months while they await deportation.

Despite stitching their lips, the protesters could still eat and drink and had been examined by a doctor, Zaratti said, describing their living conditions as shameful.

“That people were forced to such an extreme form of protest reflects their desperation,” the lawmaker for the opposition Left Ecology and Freedom party said. “These structures should be closed immediately.”

Last week, video emerged of naked detainees being sprayed on the island of Lampedusa, where hundreds of migrants died in a shipwreck in October.

On Sunday, the spokesman on immigration issues for the main party in the ruling coalition, the centre-left Democratic Party, said the government would pass less restrictive immigration laws next year. Italy’s biggest union and Rome’s mayor have also called for the closure of detention centres.

But relaxing immigration laws could also set up a fight within Italy’s coalition.

The protest followed events last weekend when around 30 neo-Nazis attacked another anti-racism rally in the same suburb, Karrtorp, throwing bottles and firecrackers at protesters. Two people were stabbed and 26 neo-Nazis were detained by police.

Sweden, long seen as a bastion of tolerance, has seen a rise in support for the far right as immigration has grown. Anti-immigration party Sweden Democrats has reached around 10 percent in the polls ahead of a parliamentary election next year.

Stockholm was hit by the worst riots in years in May in mainly poor immigrant Stockholm suburbs, with youths throwing rocks at police and setting cars on fire for more than a week.

The violence in one of Europe’s richest capitals shocked a country that prides itself on a reputation for social justice, and fuelled a debate about how Sweden was coping with youth unemployment and the influx of immigrants.

The organisers of Sunday’s demonstration estimated more than 16,000 people took part. The crowd chanted “End racism now” and “No racists on our streets”, and prominent Swedish artists played on a stage set up on a soccer field.

Parts of Karrtorp, which does not have a particularly large migrant population compared to other areas of the city, were sprayed-painted with swastik