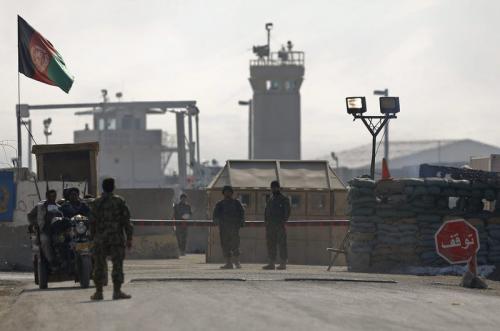 Afghan officials described the release as justice for its own citizens who had faced unfounded U.S. accusations. But the United States expressed deep concern over the decision and NATO, which runs the 12-year-old foreign military operation supporting the Karzai government, denounced it as “a major step backward”.

“If Afghan judicial authorities decide to release a prisoner, it is of no concern to the U.S.,” Karzai told a news conference in the Turkish capital Ankara after talks with Turkey’s president and Pakistan’s prime minister.

“I hope the U.S. will stop harassing Afghanistan’s procedures and judicial authority. I hope the United States will now begin to respect Afghan sovereignty,” said Karzai, who after more than a decade in power is to step down after April elections.

Karzai’s government has long complained that foreign forces have locked up Afghans on dubious grounds, with no proper judicial process.

In an unusually strong statement, the U.S. military force in Kabul said some of the released detainees had killed both Afghans and foreign soldiers and now posed a fresh threat.

“U.S. and Afghan forces risked their lives to ensure the safety of the Afghan people. We call upon the (Kabul government) to consider the potentially lethal effects of today’s releases,” it said, adding that the released detainees may resume their “criminal behaviour”.

U.S. State Department spokeswoman Marie Harf called on Kabul to ensure that released detainees do not carry out any acts of violence “and to immediately bring to justice any who would.”

“Afghanistan is a sovereign country, (Karzai) is right about that. They can make their own decisions,” Harf said.

“We have been very clear, however, that we have a legitimate force protection concern for the lives of coalition forces, of Afghan security forces and Afghan civilians because these men have been released.”

In the U.S. Congress, the chairman of the House Armed Services Committee, Representative Howard “Buck” McKeon, said he was “appalled” by Kabul’s decision. Republican Senator Lindsey Graham has said he would introduce a resolution condemning Karzai’s actions and would seek to cut off some U.S. development aid in response.

Video provided to Reuters by the Afghan Defence Ministry showed the prisoners, with jackets or blankets over their traditional Afghan garb, shaking hands with Afghan military officials as they left the prison.

Abdul Shakor Dadras, head of the Afghan board charged with reviewing the prisoners’ cases, said their detention had been unjustified from the outset, despite the U.S. claims.

In Brussels, NATO Secretary General Anders Fogh Rasmussen echoed the U.S. criticism of the release of the detainees.

“This decision, which appears to have been made based on political calculations and without regard for due process before the Afghan courts, is a major step backwards for the rule of law in Afghanistan, and poses serious security concerns,” he said.

Sons of Their Country

The prisoners were part of a much larger group of detainees transferred to Afghan authority last year as one milestone in the U.S. and NATO transition out of Afghanistan. A coalition of foreign forces has been battling the Taliban since the Islamist group was ousted in 2001.

More than 500 of those prisoners have already been released, a U.S. military official said on condition of anonymity, while others were recommended for prosecution in Afghan courts.

The 65 freed on Thursday were part of a group of 88 whose proposed release had prompted U.S. objections. The fate of the remaining 23 prisoners in the group is still being examined by the Afghan government, the official said.

An unnamed prisoner, speaking in the footage provided by the Afghan Defence Ministry, said those detained at Bagram prison were “sons of their country, whose ancestors fought against Russia,” referring to what many Afghans see as the Afghan Mujahideen’s honourable fight against the Soviet occupation in the 1980s.

The detainees have become one more issue fuelling tension in U.S.-Afghan ties ahead of the April presidential poll and the planned pullout of most foreign troops by the end of the year.

The Obama administration has been pressing Karzai for months to sign a bilateral security agreement with Washington that would allow some U.S. troops to stay beyond that deadline.

It was unclear what effect the release would have on U.S. deliberations about what a possible post-2014 troop presence could look like or on its view of the stalled security pact.

The U.S. military official said the United States had provided Afghan officials with “hundreds of pages” of what he described as evidence or leads against the prisoners.

Some of the detainees, he said, had been linked by biometric data to the production or placement of improvised explosive devices, sometimes through fingerprints left on adhesive tape used to assemble homemade bombs.