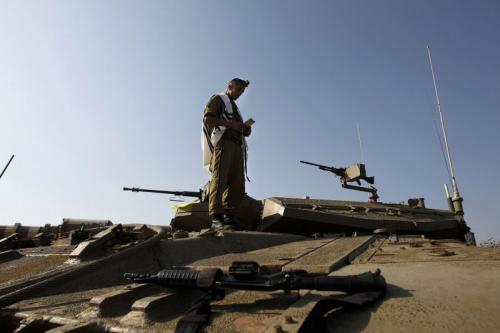 PHUKET: Israel played down weekend air strikes close to Damascus reported to have killed dozens of Syrian soldiers, saying they were not aimed at influencing its neighbour’s civil war but only at stopping Iranian missiles reaching Lebanese Hezbollah militants.

Oil prices spiked above $105 (67.5 pounds) a barrel, their highest in nearly a month, on Monday as the air strikes on Friday and Sunday prompted fears of a wider spillover of the two-year-old conflict in Syria that could affect Middle East oil exports.

“There are no winds of war,” Yair Golan, the general commanding Israeli forces on the Syrian and Lebanese fronts, told reporters while out jogging with troops.

“Do you see tension? There is no tension. Do I look tense to you?” he said, according to the Maariv NRG news website.

Israeli Prime Minister Benjamin Netanyahu came under veiled criticism in Beijing, where he began a scheduled visit in an apparent sign of confidence Syrian President Bashar al-Assad would not retaliate. China urged restraint without mentioning Israel by name.

Russia, Assad’s other protector on the U.N. Security Council, said the strikes by Israel “caused particular alarm”. President Vladimir Putin and U.S. Secretary of State John Kerry will meet on Tuesday to try to tackle differences over the Syrian crisis.

Israeli officials said the raids were not connected with Syria’s civil war but aimed at stopping Hezbollah, an ally of Iran, acquiring weapons to strike Israeli territory.

Israel aimed to avoid “an increase in tension with Syria by making clear that if there is activity, it is only against Hezbollah, not against the Syrian regime,” veteran lawmaker Tzachi Hanegbi, a confidant of Netanyahu, told Israel Radio.

Most casualties from elite unit

The Syrian Observatory for Human Rights, an opposition monitoring group based in Britain, said at least 42 Syrian soldiers were killed in the strikes and 100 were missing.

Other opposition sources put the death toll at 300 soldiers, mostly belonging to the elite Republican Guards, a praetorian unit that forms the last line of defence of Damascus and includes mainly members of Assad’s Alawite sect, an offshoot of Shi’ite Islam that has controlled Syria since the 1960s.

As well as the heavily fortified Hamah compound, linked to Syria’s chemical and biological weapons programme, the warplanes hit military facilities manned by Republican Guards on Qasioun Mountain overlooking Damascus and the nearby Barada River basin.

Residents, activists and rebel sources said the area is a supply route to the Lebanese Shi’ite militant group Hezbollah, but missiles for Hezbollah did not appear to be the only target.

Air defences comprising Russian-made surface-to-air missiles and anti-aircraft guns on Qasioun and overlooking the rebellious Damascus district of Barzeh were also hit, they said. Their statements could not be verified due to restrictions on media.

“The destruction appeared to be massive,” said one activist in Damascus, who did not want to be identified.

Russia said it was concerned the chances of foreign military intervention in Syria were growing, suggesting its worry stemmed in part from reports about the alleged use of chemical weapons in the conflict that has killed 70,000 people.

“The further escalation of armed confrontation sharply increases the risk of creating new areas of tension, in addition to Syria, in Lebanon, and the destabilisation of the so-far relatively calm atmosphere on the Lebanese-Israeli border,” Russian Foreign Ministry spokesman Alexander Lukashevich said.

Assad’s government accused Israel of effectively helping al Qaeda Islamist “terrorists” and said the strikes “open the door to all possibilities”. It said many civilians had died but there was no official casualty toll.

Israeli officials said that, as after a similar attack in the same area in January, they were calculating Assad would not fight a well-armed neighbour while preoccupied with survival against a revolt that grew from pro-democracy protests in 2011.

Israel has not confirmed the latest attacks officially, but has reinforced anti-missile batteries in the north. It said two rockets landed, by mistake, on Monday, in the Golan Heights, the Israeli-occupied area near Syria’s border with Israel.

“They were fired erroneously as a by-product of internal conflict in Syria,” an Israeli military spokesman said.

Syria would be no match for Israel in any direct military showdown. But Damascus, with its leverage over Lebanon’s Hezbollah, could consider proxy attacks through Lebanon.

Tehran, which has long backed Assad, whose Alawite minority has religious ties to Iran’s Shi’ite Islam, denied Israel’s attack was on arms for Hezbollah. Hezbollah did not comment.

Moscow and Beijing have blocked Western-backed measures against Assad at the United Nations Security Council, opposing any proposal that has his exit from power as a starting point.

Allegations of the use of chemical weapons – long described by Western leaders as a “red line” that would have serious consequences – have added to regional and international tension.

After months of increasingly bitter fighting, Assad’s government and the rebels have each accused the other of carrying out three chemical weapon attacks.

In Washington, an influential U.S. senator introduced a bill on Monday that would provide weapons to some Syrian rebels.

Democratic Senator Robert Menendez, chairman of the Senate Foreign Relations Committee, said in a statement that Assad had crossed a red line and “the U.S. must play a role in tipping the scales toward opposition groups”.

President Barack Obama has taken a cautious approach to the reports of the use of chemical weapons in Syria, saying he would not allow himself to be pressured prematurely into deeper intervention in the conflict.

The White House has said the Syrian government has probably used chemical weapons. A U.S. official said on Monday that Washington had no information to suggest that rebels had used them.

Syria is not part of the international treaty that bans poison gas but has said it would never use it in an internal conflict. Rebels say they have no access to chemical arms.

A U.N. inquiry commission said on Monday war crimes investigators had reached no conclusions on whether any side in the Syrian war has used chemical weapons, after a suggestion from one of the team that rebel forces had done so.

PHUKET: Governments and members of the European Parliament must decide on a plan to prop up the EU carbon market by July at the latest, a joint statement from nine energy and environment ministers, said.

The statement, seen by Reuters, is expected to be published officially on Tuesday to coincide with discussions among members of the European Parliament on the European Commission plan.

No-one from Britain’s Department of Energy and Climate Change, which is expected to release the statement, was immediately available for comment.

A proposal, known as backloading, to strengthen the Emissions Trading Scheme (ETS) by removing some of a glut of carbo