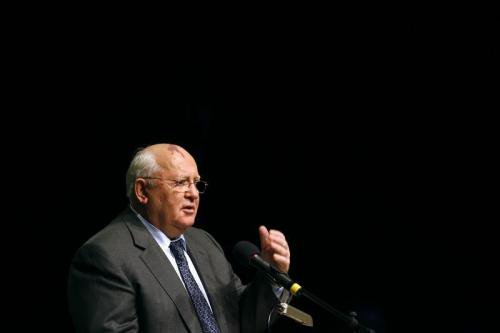 “I’m alive and well. I understand that some people are trying to use their sites to catch people’s attention or are fulfilling the orders of some authority or another,” the former Soviet president, 82, said in a statement on newspaper Novaya Gazeta’s website.

He said the hackers had been “hoping in vain”, and used a Russian profanity to describe them.

Gorbachev is disliked by many Russians for what they see as his role in the collapse of the Soviet Union, which was followed by political and economic chaos in the 1990s.

The state-run RIA news agency removed the bogus posts from its Twitter blogs within minutes and said it had launched an internal investigation and requested an investigation by the Federal Security Service.

The spokesman for the last president of the Soviet Union said in June Gorbachev had been taken to hospital for tests. Rumours about his health spread online.

Gorbachev has maintained his interest in politics and criticised Russian President Vladimir Putin’s return to the Kremlin last year.

“Negotiations between the Israelis and Palestinians will be resuming August 14 in Jerusalem and will be followed by a meeting in Jericho (in the West Bank),” State Department spokesperson Jen Psaki told a briefing.

The sides held their first peace negotiations in nearly three years in Washington on July 30 in U.S.-mediated efforts to end the conflict of more than six decades.


Chilean President Pinera seeks forgiveness for census blunder
Reuters / Phuket Gazette
PHUKET: President Sebastian Pinera asked Chileans to forgive him on Thursday for a 2012 census that a review panel found to be so flawed it should be thrown out, a political embarrassment for his government months before a general election.

An independent panel appointed by the government of conservative Pinera to review the census recommended on Wednesday that it be discarded and held again with fewer questions in 2015.

Pinera said the government will now seek a second opinion from international experts before deciding whether to discard the census and do it over from scratch or try to correct its errors.

“Mistakes were made in the census and I want to humbly ask Chileans for their forgiveness,” Pinera said at a public event.

His plea comes as Chile’s right-wing bloc jostles to bolster former Labour Minister Evelyn Matthei as its presidential candidate, before a November election that is widely expected to see ex-President Michelle Bachelet make a comeback to the presidential palace.

The panel found that 9.3 percent of Chile’s estimated 17.4 million population were not surveyed in the census, an omission rate some three times higher than other recent census carried out in the region.

“The 9.3 percent omission (rate) is a national average, but it may be higher in certain municipalities,” the panel said. The omission rate could exceed 20 percent in a fifth of the country’s municipalities, it added.

Additionally, the panel recommended that the 2012 census not be used for official data or public policy purposes, but that for “transparency’s” sake the data be made available to interested public and investigators.

In May, the government’s INE statistics agency started an internal audit of its information gathering for the national census after complaints by some of its senior officials about the accuracy of inflation and census data.

That came after nearly a dozen department heads at the INE sent the government body’s then-chief, Francisco Labbe, a letter expressing their concern about “errors” in the way the census was carried out and an unwillingness to implement methodological improvements they recommended to the CPI.

Labbe has since quit his post at the head of the INE and has been replaced.


Senior Mafia member arrested in London after 20 years on run
Reuters / Phuket Gazette
PHUKET: A senior member of an Italian mafia clan, wanted by the Italian authorities for almost 20 years, has been arrested in London where he had been running a travel agency, British police said on Thursday.

Domenico Rancadore, 64, who had been sentenced to seven years in jail while on the run, was detained in west London under a European arrest warrant on Wednesday, London’s Metropolitan Police said.

The Italian Interior Ministry said he was a leading member of the Sicilian Cosa Nostra group and was accused of mafia association, extortion and other serious crimes.

Rancadore, nicknamed “U profissuri” (the professor), is the son of Giuseppe Rancadore, the former head of the mafia clan in Trabia near Palermo, who is serving a life sentence in jail.

British media reported Roncadore, a qualified physical education teacher, had been living with his British wife and two children at a suburban house in west London using the name “Marc Skinner”.

Rancadore appeared on Thursday at London’s Westminster Magistrates Court, where his lawyer said he had lived a “blameless life” in Britain, the BBC reported.

The judge overseeing his case said there were concerns over the validity of his arrest warrant and he was remanded in custody to reappear in court again on Friday.