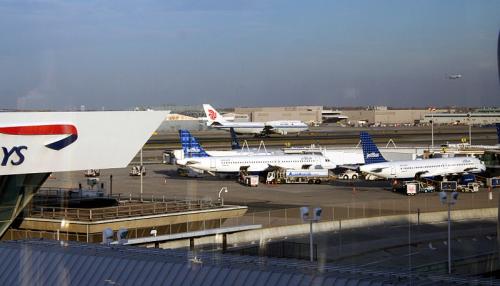 The incident happened at about 1:15pm local time on Monday when Alitalia flight 608, a Boeing 777-200, was on final approach to Runway 31 Right at John F. Kennedy International Airport.

The aircraft was on a nine-hour flight from Rome.

The Federal Bureau of Investigation (FBI) said the Alitalia pilot reported seeing the small, unmanned and remote-controlled aircraft at an altitude of 1,750 feet (533 meters) when they were roughly three miles (4.8 kilometers) from the runway.

“The unmanned aircraft came within 200 feet [60m] of the Alitalia plane,” an FBI spokesperson said.

Both the FBI and the Federal Aviation Administration (FAA) said they had launched an investigation into the incident, which did not require the Alitalia pilot to take evasive action. The unnamed aircraft was described as black in color and no more than three feet (91 centimeters) wide with four propellers.

FBI Special Agent in Charge John Giacalone said the agency is looking to identify and locate the aircraft and its operator.

“Our paramount concern is the safety of aircraft passengers and crew,” he said, asking anyone with information about the unmanned aircraft or the operator to contact the FBI.