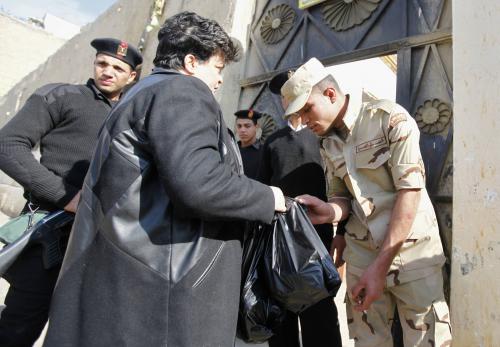 About 90 percent of voters approved the constitution, the state news agency and a government official said.

It comes as no surprise: the constitution won wide support among Egyptians who backed the army overthrow of President Mohamed Mursi in July, and there was little or no trace of a no campaign as the state presses a campaign on dissent.

Mursi’s Muslim Brotherhood, which is sure to dispute the official numbers, had called for a boycott of the two-day vote, seeing it as part of a coup against a leader freely elected 18 months ago. It had called for anti-government protests.

After nine people were killed in clashes between police and Mursi supporters on Tuesday, the protests stretched into Wednesday. Protesters skirmished with the police near the presidential palace. There were no reports of deaths.

The Interior Ministry said 444 people were arrested during the two days of voting.

State news agency MENA, citing early indications, said the approval rate exceeded 90 percent in many of the polling stations that had reported results.

An Interior Ministry official said turnout so far may have exceeded 55 percent, though MENA did not give a figure.

The referendum is a key step in the political transition plan the interim government has billed as a path to democracy, even as it presses a fierce crackdown on the Brotherhood, Egypt’s best organised party until last year.

In a widening crackdown on dissent, the authorities have also arrested secular-minded activists in recent months, including prominent figures in the historic 2011 uprising against President Hosni Mubarak.

One moderately Islamist party said its supporters had been arrested while campaigning for a no-vote in the referendum.

The referendum has been seen as a public vote of confidence in Sisi, the 59-year-old widely seen as the most powerful figure in Egypt since he removed Mursi and won massive popularity among the Egyptians who staged mass protests against his rule in June.

Sisi’s supporters see him as the kind of strong man needed to restore stability to a country in political and economic crisis for nearly three years. The stock market has rallied to three-year highs this week.

High turnout would be seen as a strong stamp of approval for the new, the army-backed order. A Sisi presidency would turn back the clock to the days when the post was controlled by military men – a pattern broken by Mursi’s one year in office.

“You could see the re-emergence of a domineering president,” said Nathan Brown, a professor of political science at George Washington University and an expert on Egyptian affairs.

At many polling stations across the Arab world’s biggest nation, the referendum at times appeared to be a vote on Sisi himself. Women chanted his name and ululated as they stood in line to vote, while a pro-army song popularized after Mursi’s overthrow blared from cars.

The draft constitution deletes Islamic language written into the basic law approved a year ago when Mursi was still in office. It also strengthens the state bodies that defied him: the army, the police and the judiciary.

Analysts say the government is anxious for a result that outstrips votes won by the Brotherhood in the last three years: 10.7 million people voted for the Islamist-tinged constitution approved when Mursi was still president, and Mursi won the presidency with 13.2 million votes in 2012.

But some local and international organisations have been heavily critical of the political climate ahead of this vote.

The Cairo Institute for Human Rights Studies criticised Egyptian media for “stoking hatred towards the Brotherhood” and contributing to a climate of intimidation.

The U.S.-based Carter Centre, which has monitored most of the votes held over the past three years of political upheaval, sent only a small observation mission after voicing concern at “narrowed political space” around the vote.

Another U.S.-funded group, Democracy International, had 83 observers deployed across the country. Programme Manager Dan Murphy told Reuters observers were reporting that “from a technical standpoint the process is proceeding normally.”

The Carnegie Endowment for International Peace in Washington warned that international players risked lending legitimacy to a “flawed and undemocratic progress.”

While Western states have criticised the crackdown and called for inclusive politics, they have put little pressure on Cairo. Egypt, which controls the Suez Canal, has been a cornerstone of U.S. policy in the Middle East since the 1970s, when it became the first Arab state to make peace with Israel.