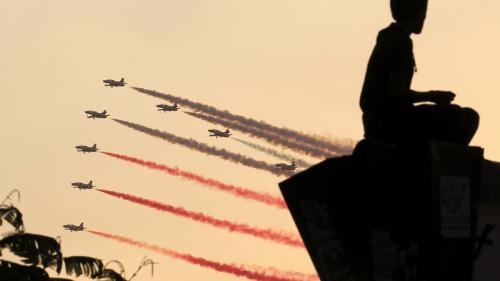 
Brotherhood leader arrested as Egypt interim leader sworn in
Reuters / Phuket Gazette
PHUKET: The leader of the Muslim Brotherhood was arrested by Egyptian security forces on Thursday in a crackdown against the Islamist movement after the army ousted the country’s first democratically elected president.

The dramatic exit of President Mohamed Mursi was greeted with delight by millions of people on the streets of Cairo and other cities overnight, but there was simmering resentment among Egyptians who opposed military intervention.

Perhaps aware of the risk of a polarised society, the new interim leader, judge Adli Mansour, used his inauguration to hold out an olive branch to the Brotherhood, Mursi’s power base.

“The Muslim Brotherhood are part of this people and are invited to participate in building the nation as nobody will be excluded, and if they respond to the invitation, they will be welcomed,” he said.

But a senior Brotherhood official said it would not work with “the usurper authorities”. Another of its politicians said Mursi’s overthrow would push other groups, though not his own, to violent resistance.

Mursi’s removal after a year in office marked another twist in the turmoil that has gripped the Arab world’s most populous country in the two years since the fall of Hosni Mubarak.

The United Nations, the United States and some other world powers did not condemn Mursi’s removal as a military coup. To do so might trigger sanctions.

Army intervention was backed by millions of Egyptians, however, including liberal leaders and religious figures who expect new elections under a revised set of rules.

Egypt’s armed forces have been at the heart of power since officers staged the 1952 overthrow of King Farouk.

The protests that spurred the military to step in this time were rooted in a liberal opposition that lost elections to Islamists, but their ranks were swelled by anger over broken promises on the economy and shrinking real incomes.

The downfall of Egypt’s first elected leader to emerge from the Arab Spring revolutions raised questions about the future of political Islam, which only lately seemed triumphant.

Deeply divided, Egypt’s 84 million people are again a focus of concern in a region traumatised by the civil war in Syria.

The Muslim Brotherhood’s supreme guide, Mohamed Badie, was arrested in the northern city of Marsa Matrouh, near the Libyan border, although security sources said they did not believe he had been trying to flee the country.

Prosecutors also ordered the arrest of his influential deputy Khairat el-Shater after both men were charged with inciting violence against protesters outside the Brotherhood’s headquarters in Cairo that was attacked on Sunday night.

At least 16 people have been killed and hundreds wounded in street clashes across Egypt since Mursi’s overthrow.

Television stations sympathetic to Mursi were taken off air, and a newspaper affiliated with the Brotherhood’s political arm said the state-owned printing press had refused to produce its Thursday edition.

Mursi was in military custody, army and Brotherhood sources said, and authorities opened an investigation into accusations that he and 15 other Islamists insulted the judiciary.

A senior Brotherhood politician, Essam El-Erian, said the movement would take a long view of the political setback, and that Egypt’s Islamist leaders had not been given a fair chance to succeed in office.

Mohamed El-Beltagy, another senior Brotherhood politician, said the movement would not take up arms over what he called a military coup, although he warned that other, unnamed, groups could be pushed to violent resistance by recent events.

But there was a call from calm from the influential Dawa Salafiya movement of Egyptian Salafists.

Outside the court where Mansour was sworn in, 25-year-old engineer Maysar El-Tawtansy summed up the mood among those who voted for Mursi in 2012 and opposed military intervention.

“We queued for hours at the election, and now our votes are void,” he said. “It’s not about the Brotherhood, it’s about Egypt.”

For the defeated Islamists, the clampdown revived memories of their sufferings under the old, military-backed regime led by Mubarak, himself toppled by a popular uprising in 2011.

The clock started ticking for Mursi when millions took to the streets on Sunday to demand he resign. They accused the Brotherhood of hijacking the revolution, entrenching its power and failing to revive the economy.

That gave armed forces chief General Abdel Fattah al-Sisi, who already had his own reservations about the state of the nation under Mursi, a justification to invoke the “will of the people” and demand the president share power or step aside.

The United States and other Western allies had also pressed Mursi hard to open his administration to a broader mix of ideas.

Sisi, in uniform and flanked by politicians, officers and clergy, called on Wednesday for measures to wipe clear a slate of messy democratic reforms enacted since Mubarak fell. The constitution was suspended.

A technocratic interim government will be formed, along with a panel for national reconciliation, and the constitution will be reviewed. Mansour said fresh parliamentary and presidential elections would be held, but he did not specify when.

Liberal chief negotiator Mohamed ElBaradei, a former U.N. nuclear agency chief and favourite to become prime minister in the interim government, said the plan would “continue the revolution” of 2011.

Straddling the Suez Canal and Israel’s biggest neighbour, Egypt’s stability is important for many powers.

U.S. President Barack Obama, whose administration provides $1.3 billion a year to the Egyptian military, expressed concern about Mursi’s removal and called for a swift return to a democratically elected civilian government.

But he stopped short of condemning a military move that could block U.S. aid.

A senator involved in aid decisions said the United States would cut off its financial support if the intervention was deemed a military coup.

Israel avoided any show of satisfaction over the fall of an Islamist president who alarmed many in the Jewish state but who quickly made clear he would not renege on a peace treaty.

Germany called the latest events in Egypt “a serious setback for democracy” while NATO Secretary-General Anders Fogh Rasmussen said he was “gravely concerned” about the situation.

The African Union said it was likely to suspend Egypt from all its activities and Turkey said the army’s overthrow of Mursi constituted an “unacceptable” military coup.

But the new emir in Qatar, which has provided billions of dollars in aid to Egypt following the ousting of Mubarak, congratulated Mansour on his appointment.