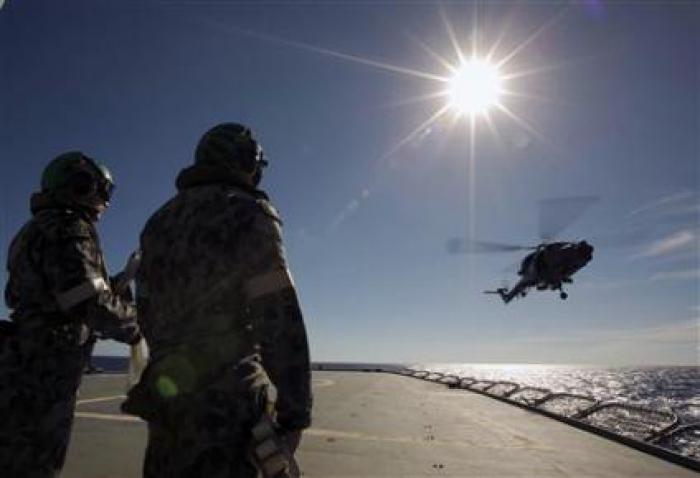 PHUKET: An Australian ship searching for a missing Malaysia Airlines jetliner has picked up signals consistent with the beacons from aircraft black box recorders, in what search officials said on Monday was the most promising lead yet in the month-long hunt.

The U.S. Navy “towed pinger locator” connected to the Australian ship Ocean Shield picked up the signals in an area some 1,680 km (1,040 miles) northwest of Perth, which analysis of sporadic satellite data has determined as the most likely place Boeing 777 went down.

“I’m much more optimistic than I was a week ago,” Angus Houston, head of the Australian agency coordinating the search, told a news conference in Perth, while cautioning that wreckage still needed to be found.

“We are now in a very well defined search area, which hopefully will eventually yield the information that we need to say that MH370 might have entered the water just here.”

If the signals can be narrowed further, an autonomous underwater vehicle called a Bluefin 21, will be sent to attempt to locate wreckage on the sea floor to verify the signals, said Houston, who noted that the potential search area was 4.5 kms (2.8 miles) deep, the same as the Bluefin range.

The black boxes record cockpit data and may provide answers about what happened to the Malaysia Airlines plane, which was carrying 227 passengers and 12 crew when it vanished off radar on March 8 and flew thousands of kilometres off its Kuala Lumpur-to-Beijing route.

Authorities have not ruled out mechanical problems as a cause of the plane’s disappearance but say evidence, including loss of communications, suggests it was deliberately diverted.

The first “ping” signal detection was held for more than two hours before the Ocean Shield lost contact, but the ship was able to pick up a signal again for around 13 minutes, Houston said.

“On this occasion two distinct pinger returns were audible. Significantly, this would be consistent with transmissions from both the flight data recorder and the cockpit voice recorder,” he said.

Depth is at edge of search capability

The black boxes, thought be to lying on the ocean floor, are equipped with locator beacons that send pings but the beacons’ batteries are thought to be running out of charge by now, a month after Flight MH370 disappeared.

“We are right on the edge of capability and we might be limited on capability if the aircraft ended up in deeper water. In very deep oceanic water, nothing happens fast,” said Houston.

“This is not the end of the search. We still have got difficult, painstaking work to do to confirm that this is indeed where the aircraft entered the water.”

Alec Duncan, expert in underwater acoustics at Curtin University’s Centre for Marine Science and Technology said the lead was promising but impossible to verify without confirmed wreckage from the aircraft.

“It’s a difficult business, operating underwater and trying to detect anything in the sort of water depth that this search involves and it’s impossible to be 100 percent sure of anything until the wreckage is actually on the deck of the ship,” he told the Australian Broadcasting Corp.

A second search area was being maintained in waters where a Chinese vessel had also picked up “ping” signals at the weekend in an area more than 300 nautical miles from the latest signals.

Chinese patrol ship Haixun 01 reported receiving a pulse signal with a frequency of 37.5 kHz, consistent with the signal emitted by flight recorders, on Friday and again on Saturday.

Houston said the Chinese and Australian discoveries of pings were consistent with work done on analysing radar and satellite data but the Ocean Shield’s leads were now the most promising.

Houston on Sunday said he was comfortable with the level of cooperation between search countries, following criticisms that Australia only became aware of the Chinese find at the same time as the Xinhua state news agency filed a story from a reporter on board the Haixun.

“I’m very satisfied with the consultation, the coordination that we are building with our Chinese friends,” Houston said.

However, he added that language was sometimes an issue and he had arranged for a Chinese liaison officer to join the Australian-led coordination centre.