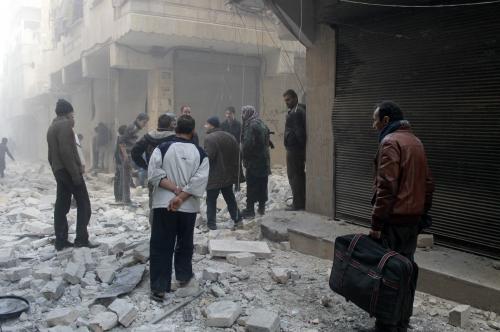 
More than 300 dead in week-long Aleppo air raids
Reuters / Phuket Gazette
PHUKET: More than 300 people have died in a week of air raids on the northern Syrian city of Aleppo and nearby towns by President Bashar al-Assad’s forces, a monitoring group said on Monday.

Many of the casualties, who included scores of women and children, were slain by so-called barrel bombs dropped from helicopters, the Syrian Observatory for Human Rights said.

Syrian authorities say they are battling rebels who have controlled parts of Aleppo, Syria’s biggest city, and most of the surrounding countryside for the past 18 months.

But human rights group have condemned the use of the improvised bombs – oil drums or cylinders which are packed with explosives and metal fragments, often rolled out of the aircraft cargo bay – as an indiscriminate form of bombardment.

Rami Abdulrahman, director of the British-based pro-opposition Observatory, said 87 children and 30 women were among the 301 people who died in the Aleppo air raids since December 15.

The United states condemned “the ongoing air assault by Syrian government forces on civilians, including the indiscriminate use of SCUD missiles and barrel bombs in and around Aleppo over the last week.”

In a statement, the White House also called on the Syrian government to “fulfil its November commitment to do more to facilitate the safe and unhindered delivery of humanitarian assistance, so that millions of Syrian men, women, and children have access to urgently needed services.”

Assad’s forces have clawed back territory to the southeast of the city in recent weeks and reasserted control over several Damascus suburbs in the build-up to planned peace talks next month aimed ending Syria’s almost three-year-old conflict.

The army is thought unlikely to be able to recapture major parts of Aleppo before the talks in Switzerland start on January 22, but Abdulrahman said the air raids might be aimed instead at turning the remaining residents against the rebel fighters by showing that the insurgents could not protect civilians.

The pro-opposition Observatory said more than 125,000 people have died in Syria’s civil war, which has also forced 2 million people to seek refuge abroad and driven more than a third of the country’s 23 million people from their homes.

Human Rights Watch said in a report at the weekend that barrel bomb attacks in Aleppo had hit residential and shopping areas, describing the air raids as illegal.

“The Syrian air force is either criminally incompetent, doesn’t care whether it kills scores of civilians, or deliberately targets civilian areas,” the group’s senior emergency researcher, Ole Solvang, said in the report.

It said on December 4 they fired at least 10 surface-to-surface rockets into residential areas, leaving at least 19 civilians dead.


AK-47 rifle inventor Mikhail Kalashnikov dies at 94
Reuters / Phuket Gazette
PHUKET: Mikhail Kalashnikov, the Russian designer of the AK-47 assault rifle which has slain more people than any other firearm in the world, died on Monday aged 94, officials said.

Kalashnikov, who was in his 20s when he created the AK-47, died in his home city of Izhevsk near the Ural Mountains, where his gun is still made, a spokesman for the Udmurtia province’s president said on state television.

No cause of death was given. Kalashnikov was fitted with a pacemaker at a Moscow hospital in June and had been in hospital in Izhevsk since November 17, state media reported.

A son of Siberian peasants who never finished school, Kalashnikov invented one of the Soviet Union’s best-known and most imitated products.

Shortly after fighting in World War Two, he created the AK-47, whose number stands for the year 1947. The “A” is for “avtomat” – automatic rifle – and the “K” for Kalashnikov.

Later versions of the AK-47 are still a mainstay of Russia’s armed forces and police more than 60 years after the original rifle went into service in the military in 1949.

At a Kremlin ceremony on Kalashnikov’s 90th birthday, then-President Dmitry Medvedev bestowed upon him the highest state honour – the Hero of Russia gold star medal – and lauded him for creating “the national brand every Russian is proud of”.

But Kalashnikov said pride in his invention was mixed with the pain of seeing it used by criminals and child soldiers.

As well as being embraced by armies, anti-Western revolutionary movements and leftist leaders around the world, the relatively cheap and simple rifle has been used by gangsters, drug traffickers, militants and rebels of all stripes.

Thirty years later, invading U.S. troops found a gold-plated Kalashnikov reportedly given to Saddam Hussein’s son Uday at one of the Iraqi leader’s palaces in Baghdad.

Osama bin Laden, the al Qaeda leader killed in 2011, posed with a Kalashnikov in videotaped diatribes against the West.

Bearded Taliban fighters in Afghanistan and Liberia’s gangs of young thugs wearing flip-flops, Somali hijackers and South American guerrillas – all seem to admire the rifle that enthusiasts say continues to work in dust, sand and swampland.

“It is painful for me to see when criminal elements of all kinds fire from my weapon,” Kalashnikov said in a videotaped address to a Russian arms conference in 2009. “I created this weapon primarily to defend the borders of our fatherland.”

At first, the upstart Kalashnikov received a cool reception.

Renowned Soviet arms designers scoffed at the first, primitive gun the young sergeant crafted in 1942 while being treated in hospital in Kazakhstan after he was pulled, severely wounded, from a burning tank during World War Two.

Five years later, his AK-47 was chosen by the military over models proposed by some of the same designers.

Kalashnikov used to say that simplicity and reliability saved lives in war situations.

“So this has been my lifetime motto – I have created weapons … to be simple and reliable.”

Those qualities have led to much imitation. About half of the world’s roughly estimated 100 million Kalashnikovs are counterfeit copies produced without licences.

“This powerful rifle … is the quickest, easiest, and cheapest way to turn a farmer, teacher, peasant or even a teenager into an effective killing machine,” Larry Kahaner wrote in his book “AK-47: The Weapon that Changed the Face of War”.

“Many western military experts consider it a piece of junk,” he wrote. But he added: “Some U.S. soldiers prefer the AK especially in Iraq where dust tends to jam their M-16 rifles but does not affect the AK.”

The Kalashnikov is officially in service in 55 countries of the world. Several national emblems feature the rifle, and some boys i