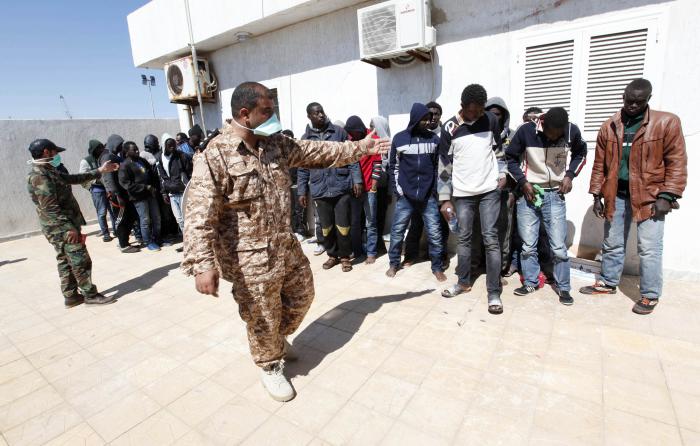 PHUKET: Libya’s coastguard has detained more than 400 immigrants, mostly from the Horn of Africa, in its waters in the past two days as they tried to illegally cross to Europe in small boats, Libyan officials said on Thursday.

The coastguard picked up five boatloads of people. Warning shots were fired at several vessels, and 78 people were rescued from a sinking ship, said navy spokesman Qassem Ayoub.

Most of those taken into custody came from Somalia and Eritrea, and a handful were from Ghana and Nigeria. Some are held at a Tripoli police station and are being examined by a United Nations medical team, said the deputy commander of naval operations, Mohammed al Baty.

More than 400 people were detained in all, Ayoub said. “We noticed that the boats that had been caught contain sequential numbers, and so we expect that there are some boats that have been able to sneak to the other side of the Mediterranean Sea,” he added.

Many migrants from sub-Saharan Africa head to North Africa to escape from desperate conditions in their own countries, hoping to find work there or risk the perilous journey to Europe.

The Mediterranean can be treacherous in the fall and winter months, making spring and summer the best time for small boats with ill-equipped crews to cross the sea.

Italy alone rescued 4,000 migrants from boats trying to reach European shores in early April. At that point 15,000 migrants had already arrived there by sea since the start of the year.

The boats leaving Libya usually attempt to land on the Italian island of Lampedusa or Malta.

“I came for work but sometimes there is frustration. This is the only way to get money back to your country. If you go to Europe you can survive. That’s why we are crossing the sea,” a man named Ibrahim from Ghana told Reuters at the police station.

Since the overthrow of Muammar Gaddafi in 2011, the number of immigrants passing through Libya has risen sharply and the country’s coastguard and army are ill-equipped to stem the tide.

“Libya cannot act alone, there is a significant flow from the south that is too strong for Libya, unfortunately,” Ayoub said. “It’s difficult to control the borders given the current security situation in the country.”