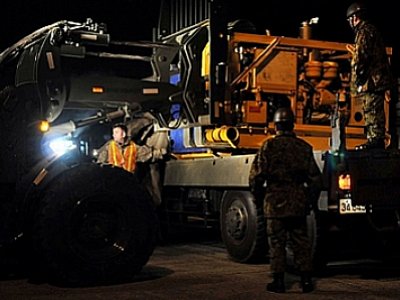 According to Tepco, the safety equipment at the No. 2 reactor of the nuclear plant showed the temperature had reached about 82 degrees Celsius (179.6 degrees Fahrenheit) at 2:15pm. The temperature has been increasing gradually since February 2, less than two months after the company announced a cold shutdown.

As a result of the increase in temperature, Tepco has been changing the amount of water injection and increasing the monitoring of the reactor’s temperature. Specifically, between 11:38 am and 1:50 pm local time, Tepco injected water with boric acid to prevent the reactor from reaching critical levels.

Later that afternoon, between 2:10pm and 3:30pmm Tepco also increased the water injection amount through the core spray system and the reactor feed water system.

But despite the temperature rise, Tepco pointed out that there is only one point where the temperature is increasing, and temperature indicators near the Reactor Pressure Vessel and in the Primary Containment Vessel show the facility as a whole is cooled. Officials said the temperatures at other areas of the plant tend to decrease due to the increase in water injection amount.

“We could assume that there is some water around the point at stake and that it cools down the point,” Tepco stated. “Judging from the relationship between the entry pressure in the Primary Loop Recirculation System and the amount of water injection in the reactor feed water system, overall, we judge that cooling the reactors works properly now.”

Japan has been facing an ongoing nuclear crisis since the Fukushima Daiichi nuclear power plant was severely damaged on March 11, 2011 when a 9.0-magnitude earthquake and a subsequent tsunami devastated the country. The disaster disabled the cooling systems of the plant and radioactive elements leaked into the sea and were later found in water, air and food products in some parts of Japan.

Amsterdam Schiphol Airport reopens after man makes bomb threat
PHUKET (News Wires): Dutch military police yesterday arrested a man who had locked himself in a toilet at Amsterdam’s Schiphol Airport and claimed to be carrying a bomb, officials said. No explosives were found.

The incident began at around 10:45am local time when an unidentified white man, dressed in a white jacket, fled into toilets near a rooftop viewing area and shouted that he was carrying an explosive device. Authorities then decided to evacuate departure terminals 1 and 2 as a precaution.

Hundreds of people were evacuated from the terminals as heavily armed military police and the army’s bomb squad responded to the airport, which is Europe’s 4th busiest and the world’s 12th busiest by total passenger traffic. More than 49.8 million passengers passed through the airport in 2010.

Several hours later, just after 1pm local time, the suspect peacefully surrendered to police and was taken into custody. The evacuation continued for several more hours until the army’s bomb squad determined there were no explosives in the man’s luggage.

“The facts, the identity of the suspect and his motive are still being investigated,” a spokesperson for the Ministry of Defense said, giving no other details. Reports said the man was not carrying any identity papers and authorities were having difficulty communicating with him.

Airport spokeswoman Marianne de Bie said departure terminals 1 and 2 were resuming operations late yesterday afternoon. She said dozens of flights were delayed or canceled during the evacuation and noted that delays were likely to continue for the rest of the day.

Umar, who allegedly had ties to al-Qaeda, has since pleaded guilty to trying to blow up the aircraft and is due to be sentenced later this week. He faces a maximum sentence of life in prison.