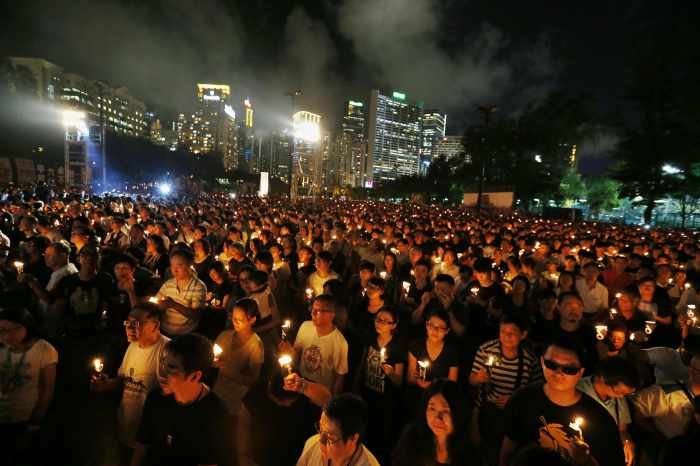 PHUKET: Tens of thousands of people held a candlelight vigil in Hong Kong on Wednesday to mark the bloody crackdown on pro-democracy protesters 25 years ago in Beijing’s Tiananmen Square, while mainland China authorities sought to whitewash the 1989 event.

In Beijing, police flooded the streets around the square, scene of the worst of the violence a quarter of a century ago, and censors scrubbed the Internet clean of any mention of the rare open display of defiance against the Communist Party.

In Hong Kong, which returned to Chinese rule in 1997 but remains a free-wheeling, capitalist hub, demonstrators holding candles and clad mainly in black gathered in a downtown park and called on Beijing to atone for the killings.

A large number of mainland Chinese also flocked to commemorate the crackdown in the former British territory, where a vigil has been held every year since the massacre. Organisers said some 180,000 people took part on Wednesday evening.

“Hong Kong is a free society where you can speak out. In China, the Communist Party dictates everything,” said Chen Jing Gen, in his 60s, who travelled from the southern Chinese city of Shenzhen to attend the vigil.

“People in mainland China are mostly aware of June 4, but due to the control of the Party no one dares to talk about it.”

The United States led international calls for China to account for what happened on June 4, 1989. The comments riled China, which has said the protest movement was “counter-revolutionary”.

China has never released a death toll from the crackdown after troops shot their way into central Beijing, but estimates from human rights groups and witnesses range from several hundred to several thousand.

Public discussion of Tiananmen is forbidden in China and online references to it are heavily censored, leaving many of the country’s youth ignorant of what happened.

“I had never heard of the Tiananmen incident until I was studying in the United States when I was 18,” said a 25-year-old woman surnamed Lan, who was visiting Hong Kong from Beijing.

In mainland China, police, soldiers and plainclothes security personnel enveloped Tiananmen Square, checking identity cards and rummaging through bags looking for any hint that people might try to commemorate the anniversary.

Police escorted a Reuters reporter off the square, which was thronging with tourists, saying it was closed to foreign media.

Police also detained another Reuters journalist for trying to report on the anniversary in one of Beijing’s university districts, releasing him after a few hours.

Rights group Amnesty International has said at least 66 people had been detained in the period leading up to the anniversary.

“They have covered up history. They don’t want people to know the truth of what they did,” veteran activist Hu Jia told Reuters from his home in Beijing, where he said police were present to prevent him from leaving.

“Nobody would have confidence in them if they knew what they did… They should have fallen because of what they did,” he added, speaking by mobile telephone.

China’s Foreign Ministry on Tuesday defended the crackdown, saying the government had chosen the correct path for the sake of the people.

The protests began in April 1989 as a demonstration by university students in Beijing to mourn the death of Hu Yaobang, the reformist Communist Party chief who had been ousted by paramount leader Deng Xiaoping. They grew into broader demands for an end to corruption as well as calls for democracy.

Many Chinese would balk at the idea of mass revolution today. China is now the world’s second biggest economy, with most Chinese enjoying individual and economic freedoms never accorded them before.

“I don’t think it can happen again,” said a Beijing resident who gave his family name as Xu. “China’s system is certainly different from the West. The population is huge, 1.4 billion people. If you want to govern it well, it’s not easy.”

But Wu’er Kaixi, a leading figure in the pro-democracy movement of 1989, told Reuters that Chinese people could rise up once more against the Communist Party in anger at anything from graft to the country’s badly polluted air, water and soil.

“Yes, you gave us economic freedom, but you are jumping in and looting us, robbing us of our future, corrupting the culture, our values and the environment,” he said before the anniversary from Taiwan, where he works at an investment firm.

“All this has been clearly and widely expressed by Chinese people in the last two decades. This discontent will emerge into one thing one day: a revolution. I am sure the Communist Party is very well aware of this.”

On both sides of Hong Kong’s iconic harbour, scuffles broke out between rival political factions in the worst confrontations so far at a June 4 event, highlighting rising tensions between the city and mainland China.

It comes at a sensitive time for the Asian financial centre, with debate over constitutional reform looming and pro-democracy activists planning to hold mass protests in July to demand the right to choose their own candidates for a poll in 2017 to elect the next Hong Kong leader.

Pro-Beijing group the Voice of Loving Hong Kong taunted vigil-goers at the entrance to Victoria Park, where more than 30 uniformed police monitored proceedings.

“Let the past pass … it’s already 25 years. If we continue, all Chinese are losers,” said chairman of the group Patrick Ko.

The group played a video in which it claimed 5,000 soldiers were injured during the Tiananmen clashes, more than the 4,000 citizens it said had been hurt.

Amid pushing and shoving, Hung shouted into a loud-hailer: “Go die … Get out of Hong Kong.”

Hong Kong residents have increasingly taken to the streets to protest against perceived meddling by China in the city’s affairs, causing a headache for mainland authorities.

The world’s first museum commemorating the victims of the Tiananmen crackdown opened in Hong Kong in late April and more than 6,000 people have visited since then.

The White House said the United States continued to honour the memories of those who gave their lives on June 4, 1989, and called for a full account of what happened.

In democratic Taiwan, which China claims as its own, President Ma Ying-jeou said China should ensure that a “tragedy” like June 4 never happened again.

“If Chinese authorities can tolerate differences, not only can that raise the height and the legitimacy of those in power, but also send a clear message to Taiwan that political reform in China is serious,” Ma said in a statement.

Japan, engaged in a bitter territorial dispute with China, used the anniversary to urge Beijing to respect human rights and the rule of law.