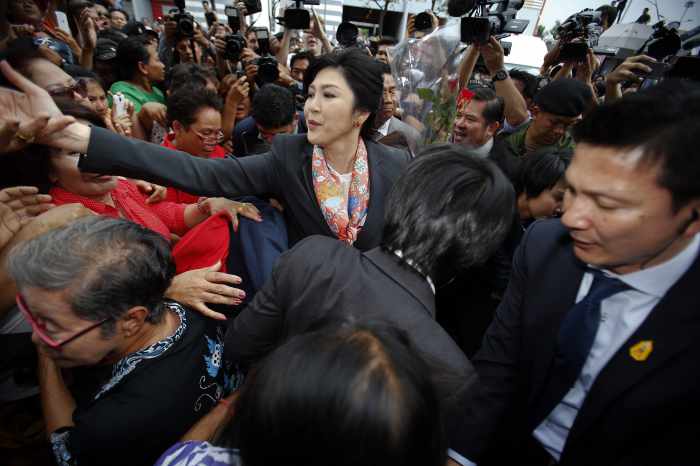 PHUKET: The national anti-graft agency yesterday resolved to examine the assets of former prime minister Yingluck Shinawatra and four other members of her Cabinet involved in her government’s loss-making and corruption-plagued rice price-pledging scheme.

The National Anti-Corruption Commission (NACC) has assigned one of its nine commissioners, Narong Rathamarit, to head the subcommittee responsible for the investigation, the agency said in a press release.

In addition to Yingluck, three of her commerce ministers, Niwattumrong Boonsongpaisan, Boonsong Teriyapirom and Yanyong Phuangrach, and her deputy commerce minister, Phum Saraphol, will also be targeted, according to the NACC.

In early May, the NACC unanimously resolved to indict Yingluck for allegedly having intent to exercise power against the Constitution concerning the rice scheme. She will face impeachment and a five-year ban from politics if the Senate agrees with the NACC.

The anti-graft agency is also investigating alleged criminal offence of dereliction of duty against Yingluck.

The panel’s investigation may also cover people close to the five former government ministers if they are found to have connections with the rice scheme, according to Worawit Sukboon, deputy secretary general of the NACC.

He said that former members of the Yingluck Cabinet who vacated their positions on May 7 and May 22 had until yesterday and June 20 respectively to submit to the NACC their latest financial statements. He expected information about the former Cabinet members to be available publicly in early July.

Five former Cabinet members have yet to submit reports about their assets and debts to the NACC, according to Worawit.

If they fail to meet the deadline, those ex-ministers need to explain why in writing to the NACC, which will then determine whether their arguments are reasonable or whether it is their intent to try and conceal their assets, according to Worawit.

In response to social media calls for the NACC to examine the assets of ruling junta members, Worawit said that existing laws did not require that, so the agency had no authority to do so.

Meanwhile, the ruling National Council for Peace and Order (NCPO) has assigned the regional Army area commands to prepare for large-scale checks of government rice stocks, according to a source attending yesterday’s meeting of the NCPO that was chaired by its secretary general Udomdej Sitabut.

As soon as a committee charged with checking rice stocks is set up, the regional Army commands will check stocks at warehouses all over the country, the source said.

Rangsan said the policy for the establishment of a new committee would need to be approved by the NCPO, though the ministry was responsible for finding funds for the rice-pledging scheme.

He also said that he had testified in the NACC’s dereliction of duty case against Yingluck in relation to the rice-pledging scheme.

But he said he did not have much information regarding the case, as he was not directly responsible for the scheme.

Like other witnesses in the case, he was asked by the NACC not to speak to the media about the case.

In a related development, former Democrat MP Warong Dechgitvigrom urged the NCPO to end the controversial rice-pledging scheme, saying that it should be replaced with a rice-price guarantee.

Warong said the NCPO should apply a transitional measure by paying compensation to farmers for the cost of fertiliser and pesticide at the rate of between Bt1,000 to Bt2,000 per rai.

He pointed out that the pledging scheme was exposed to corruption at all levels and that it was better to drop the concept.

Warong, who exposed the alleged corruption in the scheme, said the NCPO should act urgently because farmers were waiting for help.