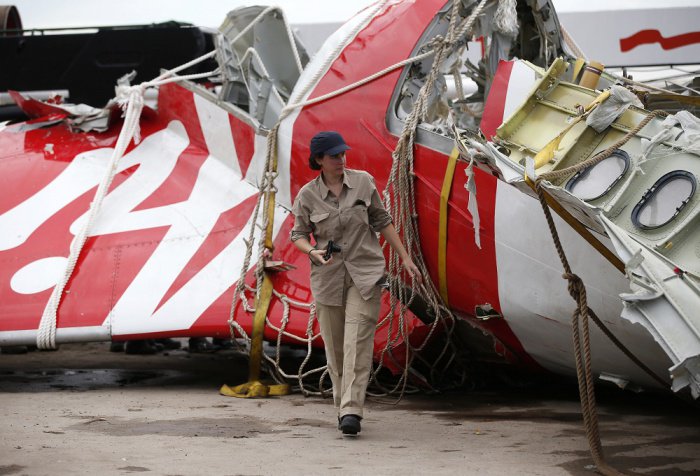 PHUKET: Indonesian navy divers retrieved the black box flight data recorder from the wreck of an AirAsia passenger jet on Monday, a major step towards unravelling the cause of the crash that killed all 162 people on board.

But there was confusion about what happened in the final moments of Flight QZ8501, which crashed off the Indonesian coast on Dec. 28, with one official saying the plane probably exploded before hitting the water and another disputing that theory.

The Airbus A320-200 airliner lost contact with air traffic control in bad weather less than halfway into a two-hour flight from Indonesia’s second-biggest city of Surabaya to Singapore.

“At 7:11, we succeeded in lifting the part of the black box known as the flight data recorder,” Fransiskus Bambang Soelistyo, head of the National Search and Rescue Agency, told reporters at a news conference.

The second so-called black box, containing the cockpit voice recorder, is located about 20 metres away from where the flight data recorder was found, but divers have not yet been able to get to it.

“(The cockpit voice recorder) seems to be under a wing, which is quite heavy,” said Supriyadi, operations coordinator for the search and rescue agency. “So we will use air bags to lift it. This will be done tomorrow.”

The black boxes contain a wealth of data that will be crucial for investigators piecing together the sequence of events that led to the airliner plunging into the sea.

Supriyadi said the wreckage indicated that the plane likely “experienced an explosion” before hitting the water due to a significant change in air pressure.

He said the left side of the plane seemed to have disintegrated, pointing to a change in pressure that could have caused an explosion.

Supporting this possibility, Supriyadi added, was the fact that fishermen in the area had reported hearing an explosion and saw smoke above the water.

But another official disputed the likelihood of a blast.

“There is no data to support that kind of theory,” said Santoso Sayogo, an investigator at the National Transportation Safety Committee.

The flight data recorder was brought by helicopter to Pangkalan Bun, the southern Borneo town that has been the base for the search effort, and then flown to Jakarta for analysis.

The black box looked to be in good condition, said Tatang Kurniadi, the head of the transport safety committee.

Investigators may need up to a month to get a complete reading of the data.

“The download is easy, probably one day. But the reading is more difficult … could take two weeks to one month,” the NTSC’s head investigator, Mardjono Siswosuwarno, said.

Over the weekend, three vessels detected “pings” that were believed to be from the black boxes, but strong winds, powerful currents and high waves hampered search efforts.

Dozens of Indonesian navy divers took advantage of calmer weather on Monday to retrieve the flight recorder and search for the fuselage of the Airbus.

Forty-eight bodies have been retrieved from the Java Sea and brought to Surabaya for identification. Searchers believe more bodies will be found in the plane’s fuselage.

Relatives of the victims have urged authorities to make finding the remains of their loved ones the priority.

Sources close to the investigation say the aircraft’s transponder transmitted data as it first rose sharply then fell from a peak of 38,000 feet, but that it stopped transmitting its altitude once it had completed a third of its descent.

The jet kept sending other data such as the speed of descent, which was the last parameter to be broadcast before it hit the water close to where wreckage was subsequently found.

It is not yet clear whether the gap in altitude data below 22-24,000 feet originated in the A320’s systems or problems in transmission, underlining the importance of recovering complete evidence from the data recorder.

Separately, Airbus has begun talks with a European regulator on proposals to make ejectable flight recorders available on its two largest models, potentially making them the first commercial planes to use the technology.

Indonesia AirAsia, 49 percent owned by the Malaysia-based AirAsia budget group, has come under pressure from authorities in Jakarta since the crash.

The transport ministry has suspended the carrier’s Surabaya-Singapore licence for flying on a Sunday, for which it did not have permission. However, the ministry has said this had no bearing on the crash.