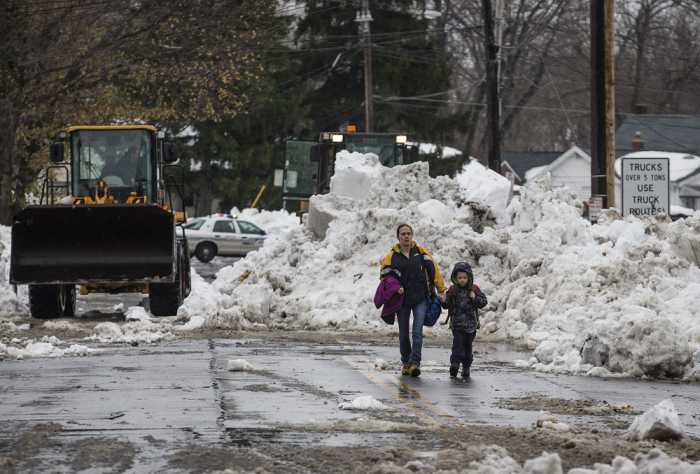 PHUKET: Emergency workers filled thousands of sandbags on Sunday as the area around Buffalo, New York braced for potential flooding as warming temperatures began to melt up to two meters of snow.

Creeks appeared to be flowing smoothly and no flooding had been reported as the sun began to go down, county officials said.

More than 775 members of the New York National Guard were in Erie County and Buffalo to help with flood prevention after days of work to clear roads and dig homes and cars out of the record snow from a storm that killed 13 people.

Roofs collapsed and some people were stuck in their cars for more than 24 hours when the heaviest snow fall in memory hit areas of New York state along the Great Lakes. The November storm system, dubbed the “Knife Storm,” lasted three days.

The National Weather Service said roads could flood quickly from snow melt since the storm blocked drains, and issued warnings for potential flooding of four rivers and creeks.

“We hope to get back to business on Monday. Government offices will be open. Schools will be open. We are sending teams of structural engineers in to inspect any school that might have the potential of a structural problem,” New York Governor Andrew Cuomo said at a news briefing.

Flood warnings were in effect as the NWS said higher temperatures – rising to 10º Celsius on Sunday and 15ºC on Monday – could rapidly unlock up to 15cm of water.

As the dinner hour set in, no flooding had been reported, Erie County spokesman Peter Anderson said in an email.

“Resources are being staged for quick deployment and all eyes are on the creeks,” he said. “The weather is warmer and snow is melting, but creeks are flowing well.”

Cuomo said the state had prepared in case of widespread flooding, moving in hundreds of pumps, tens of thousands of sandbags and putting together a robust evacuation plan.

Three sandbagging machines and 176,500 sandbags were among the supplies taken to staging areas. Ellen Przepasniak, spokeswoman for the Erie County emergency operations effort, said sandbags would be quickly deployed to cities and towns that report rising waters.

The state has provided some 3,000 tons of sand to fill the bags, Anderson said.

Inmates from the Erie County Jail holding center were filling sandbags in a parking lot, as New York city firefighters loaded boats into the backs of pickups and dump trucks.